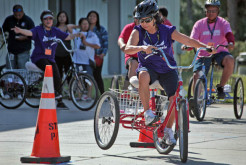 “Go BC,” yelled Big Cypress Councilman Mondo Tiger as he rallied his team.

“Everybody knows this is to promote health, so let’s stay active, seniors,” he said.

Seniors from Big Cypress, Brighton, Hollywood, Immokalee and Tampa competed in the 10th annual event held at the aviation hanger in Big Cypress. It was the largest crowd ever, said organizer Lauren Goas.

“It was a really successful Trike Fest; it was really smooth,” said Goas, Hollywood health educator. “More people dressed up than ever before and they went all out decorating the trikes this year.”

The Halloween theme prompted seniors to don fantastic, frightful and fanciful costumes and get into the festive atmosphere of the day. Categories in the costume contest were best dressed male and female, prettiest, scariest and most original.

Trike decorations varied by reservation: Immokalee’s celebrated the fall harvest; Hollywood seniors turned their trike into a mini-haunted house; Big Cypress seniors built a truck filled with bloody body parts; Tampa’s was taken over by witches; and Brighton’s trike was decked out as a pumpkin. Judges went for gore this year and awarded the trophy to Big Cypress.

In addition to fitness, the day’s fun had another purpose: friendship.

“This gives them the chance to keep their competitive spirit going,” Rep. Frank said. “A lot of them have been competing against each other for 40 or 50 years – all their lives. It’s good to see them still going at it.”

“It feels good to see old friends and the fellowship is great,” he said. “We all have that competitive edge; we all want to win.”

Events included the cone weave, target toss, maze, puzzle challenge and team relay. Throughout the day, but especially during the team relay race, seniors waved pom-poms and cheered for their teammates who wove through the cones as fast as they could.

Seniors competed within their age groups; super seniors ages 55-61, golden seniors ages 62-98 and diamond seniors ages 69 and up. Those unable to ride bikes, known as hikers, competed in the ring toss, target toss and ladder ball.

Tampa seniors won the prize for having the largest percentage of their reservation’s seniors compete. With the most points earned, Big Cypress won best overall for the first time in four years.

“The teams came out and did what they had to do,” said Brighton Board Rep. Larry Howard. “I look up to them. They paved the way and one day I’ll do the same thing.”