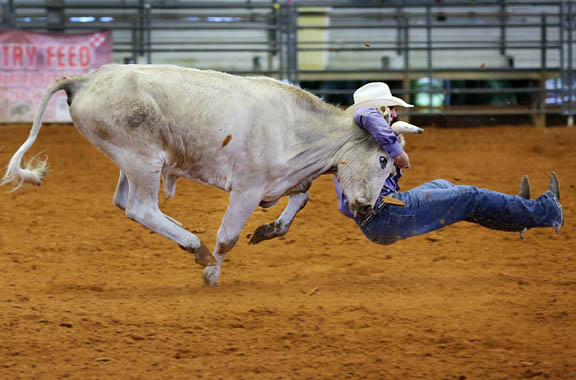 BRIGHTON — It was a long night July 1 in Brighton as cowboys and cowgirls rode a doubleheader at the Fred Smith Rodeo Arena. The previously postponed Cinco de Mayo Rodeo kicked things off and the Josiah Johns Memorial Rodeo followed.

Josiah Johns was an all-around rodeo champion and a founder of the Southeastern Indian Rodeo Association, which later became the EIRA. He was the first Seminole to compete in the Indian National Finals Rodeo (INFR) and was inducted into its Hall of Fame in 2012. Outside the rodeo arena, Johns was instrumental in building the Brighton Seminole bingo hall, which grew into today’s casino.

“He participated in rodeos from Madison Square Garden to California and everywhere in between,” Marty Johns said. “I learned from my father; he made me what I am. This is the life we live, this rodeo. I’m privileged to follow in his footsteps.”

Jumper read a poem he wrote shortly after Johns passed away in 1983. Titled “Say it ain’t so, Joe,” the poem laments the untimely loss of the rodeo champion.

“Marty and Lisa were always involved in the rodeo,” Jumper said. “The rodeo family coincides with our agricultural background. We have a deep history in cattle and horses; that’s what motivates us to keep in the rodeo.”

Before the second rodeo began, Justin Gopher and Josh Jumper spoke to the audience about the importance of preserving rodeo as part of the Seminole way of life. Both men grew up in the rodeo and still compete.

“This is who we are; this is our cowboy life,” Josh Jumper said. “I want this to thrive. There are a lot of kids coming up in this Indian rodeo.”

The competition was fierce as cowboys and cowgirls racked up points for their EIRA standings.

Johns’ 153 points leads the men in all-around points going into the regional finals rodeo; Leanna Billie’s 46 points land her in the lead for the women.

The July 1 events capped the six-rodeo EIRA season. Regional finals will be held Sept. 26 to determine who advances to the Indian National Finals Rodeo (INFR) Nov. 3-7 in Las Vegas.