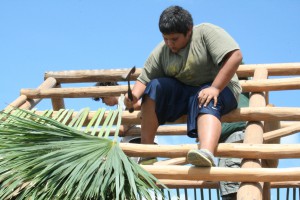 BRIGHTON — As most youth were off enjoying their Memorial Day weekend, Lewis Gopher Jr. and Conner Thomas stood on top of a bare chickee with the hot Florida sun blazing down on them on May 26. They nailed fresh palms into the new roof while Donovan Harris, Ruben Burgess and Andrew Fish handed them more fans from below.

The boys met at Pemayetv Emahakv Charter School to re-thatch a chickee on the grounds as one of the many projects planned by the newly formed Brighton Boys Club.

“I have never thatched a chickee before,” Thomas said. “I just wanted to learn how and be the first to see the finished chickee.”

Thomas wasn’t the only one; as it turned out, all five boys were learning for the first time.

“These are supposed to be our homes,” Gopher Jr. said. “I figured it would be good to know a part of me I did not know. It is easy work, just a lot to do.”

The group had one of Brighton’s best and most well-known chickee builders teach them the traditional Seminole trade – Sandy Billie.

“He is always willing to help out,” Brighton Boys Club founder Lewis Gopher said. “He told me he would be here and he showed up.”

The idea for the project came from Gopher, who works part time at the school as a carving instructor.

“I noticed that the chickee needed work, so I approached the school,” Gopher said. “I told them we would do it for nothing. This is just a payoff enough just working with these guys and teaching them.”

Gopher said he wanted to complete the chickee project before school got out so the Charter School kids who participated could show off their handiwork to their peers and recruit more members for the Boys Club.

Gopher participated in a similar group as a young adult in Hollywood. He said he remembered finding brotherhood among his fellow Tribal males and partaking in events that were guided by now Non-Resident Liaison Kevin Osceola.

Remembering his past only reinforced what he wanted for his sons and his community.

“When I was younger like these guys, you knew everybody on the reservation; you knew their brothers and sisters; and now it’s getting to be that we’re strangers out here,” he said. “This club is just another way for them to network with each other and get to know each other.”

So Gopher began to put all his thoughts on paper, laying out exactly what he wanted the Brighton Boys Club to be, and by March 29, his proposal was ready.

After receiving the approval from the Brighton Council, he began his door-to-door quest to attract participants. He printed out several fliers announcing the new club, but instead of just stuffing them in mailboxes, he took a more personal approach.

“I went out to the parents, and that way it was more personal,” he said. “It was like, ‘I know your kid. I want your kid to come over.’”

The Brighton Boys Club officially formed in April to create unity among the young Brighton boys. Gopher said he wants the boys to take pride in their community.

The club has grown from eight members at their first meeting to more than 20 members and several participating fathers.

Meetings are held on Tuesdays at the Culture Camp at the Fred Smith Rodeo Arena. During the meetings, the youth are provided with snacks and are given free time to play games such as horseshoes and football.

“Some of us didn’t even know each other,” Gopher Jr. said. “We are brothers, and we have to stick together.”

At the meetings, attendees must sign in with their age, interests and project ideas.

Once the meeting starts, the boys sit in a circle and discuss topics that have come up throughout the week involving the young adults.

“We have a little go-around,” Lewis said. “I start, and I will tell them something I did that made me feel proud this week, you know, something proud I did, and then it goes to the next kid, and every time after one says it, we’ll clap for them, we’ll give them a hand to help them with their self-esteem. I think that does good for them.”

For Burgess, the group has offered him a safe, positive place to be.

“It is fun,” he said. “It is guy stuff and it pertains to our culture.”

Gopher hopes the club can teach the boys some important principles, such as timeliness, dependability and honesty, with the main goal being to create unity.

At one of their more recent meetings, the Seminole Police Department taught a fire safety course.

Other upcoming projects include camping on the Brighton preserve; cleaning up and doing minor landscaping to the Brighton elders’ yards; and a major project in the works – building their very own Seminole camp at the late Billy Bowlegs’ homesite.

“I figured if the boys could handle rebuilding this chickee it would be a great start,” Gopher said.

The boys’ hard work and good deeds have already been noticed by their community members and even Tribal officials. Brighton Board Rep. Larry Howard offered to hire the boys to build a chickee at the Trading Post, boosting their confidence and adding to the excitement of the new club.

“What little bit we can do, we want to keep doing,” Gopher said.