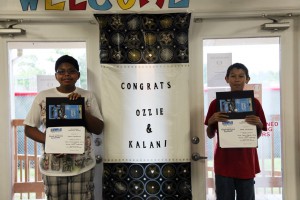 As part of the media productions class offered by the club, the boys spent two weeks creating a 40-second commercial titled “A Great Place to Be.” It showcased different activities available at the Seminole Boys & Girls Club. Ozzie and Kalani entered their commercial into the 10th annual Boys & Girls Club Digital Arts Festival and won.

“I really applaud their passion and their drive,” said Boys & Girls Club youth coordinator Robert C. North Jr., who teaches the media class. “These guys teamed up and made something I think is a positive thing.”

The festival, open to Boys & Girls Clubs nationwide, contains categories including movie making, graphic design, game design and music. This was the first year the Seminole Boys & Girls Club participated, but they still beat out the competition.

“I was really happy because I never win anything, and this is the first contest I won,” Kalani said.

Kalani played the role of sound mixer and boom operator, while Ozzie wrote, directed and operated the camera for the commercial. Other Seminole Boys & Girls Club members played the actors.

“It takes a lot of patience and discipline to put together a piece like that,” Hollywood Boys & Girls Club director Robert North said. “They were up against all the clubs. I just can’t believe this was their first time.”

In addition to their awards, the boys also received gift cards to Best Buy. Ozzie plans to spend his on new accessories for his electric guitar.

“I thought they were messing with me when they said we won,” Ozzie said.

“I really hope the youth get an opportunity to express themselves with anything creative and [get exposure] to the different opportunities out there,” North Jr. said. “We try to make it as fun as possible.”

The media productions classes are held on Mondays from 5-7 p.m. in Hollywood; Tuesdays from 4-5 p.m. in Big Cypress; and Fridays from 3-4:30 p.m. in Brighton.