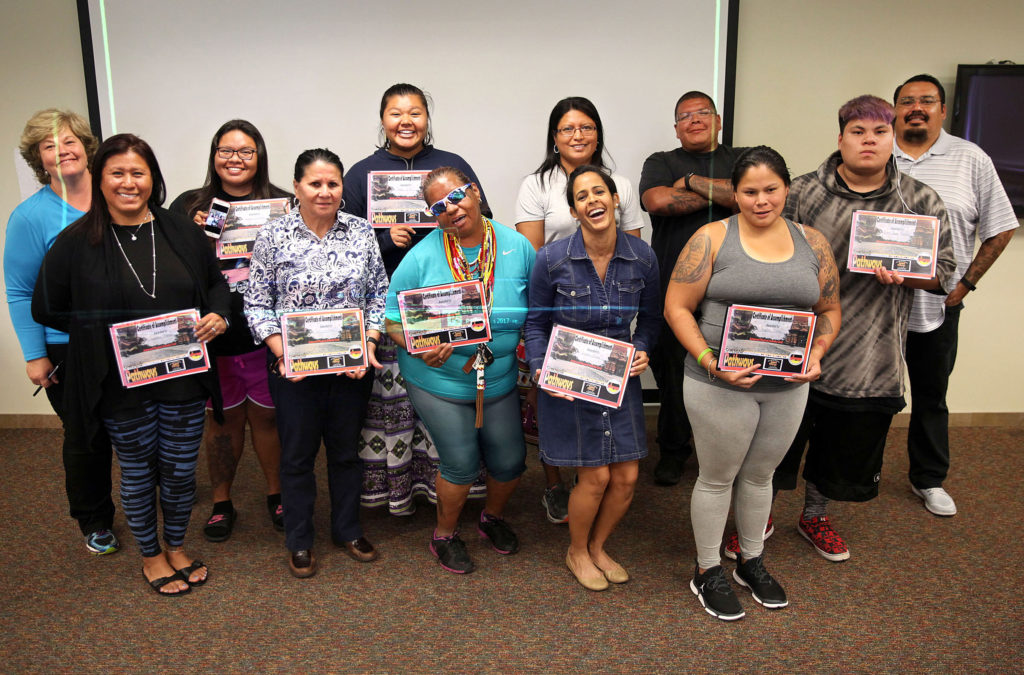 BRIGHTON — Participants in the six-week Seminole Pathways Fitbit Challenge celebrated their weight loss success and fitness accomplishments at the end of the program in May.
In Brighton, a healthy lunch was shared May 4 along with stories about what the program meant to some of the 34 people who tracked their steps and food consumption since March. Some had experience in previous Pathways programs while others were first-timers who learned about the commitment it takes to reap the rewards that follow.

“I saw other Tribal members doing it, so I did it too,” Martha Tommie said. “I didn’t think I had the courage. I’m amazed at my results.”

Tommie lost nearly 20 pounds, more than anyone else in the Brighton program. She also hoofed more than 364,000 steps. Although she doesn’t have diabetes, she joined the program to prevent the disease. An added benefit was the stress relief it provided.

“I have five nieces in the group. I’m trying to be a role model,” she said. “Eating healthy and staying away from greasy food was the biggest change. It’s changed my life around.”

Together, the group logged more than 13.5 million steps, a record number for Brighton. Individuals relished the competitive nature of the challenge and pushed each other to do more. Standings, number of steps and pounds lost were shared at the luncheon. Joe Osceola took first place with more than 994,000 steps, followed by Jewel Buck with 683,000 and Rita Gopher with 624,000.

“Our job is to put the program together and be the facilitators,” said Barbara Boling, health education coordinator. “That people in the group challenged each other is a win. This has been a really active group.”

Boling told the group even if they were in 34th place it was better than not having done it at all. She hopes to have another program in the fall.

“I learn something every time,” said Laverne Thomas, who tries to participate in every Pathways challenge. “It makes me realize how it feels to exercise, and it does feel good. Seeing the results when you go to the clinic and seeing how everyone else is doing helps motivate you.”

Camaraderie was another motivation for joining and staying in the program.

“At first the Fitbit was the motivation, but then to see Indians out there and the competitiveness was fun,” said Kevin Holata. “I absolutely will do it again, I’m glad they have this program.”