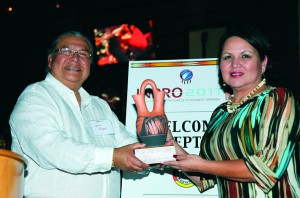 HOLLYWOOD — The National Center for American Indian Enterprise Development (NCAIED) made its first appearance in Seminole Country as part of a two-day opportunity to promote the growth and development of Native businesses.

“The whole idea behind the center (NCAIED) has always been to promote Indian-owned businesses for survival sake, so Tribal citizens can take care of themselves,” said Joel M. Frank Sr., longtime NCAIED Board of Directors member. “We want to continue to bring industry to the reservations. This type of event was to encourage networking where Natives are able to someday submit contracts. They (the young people) need to be competitive and go out there to see that whole new world and be aware of it and reach out beyond the Tribe.”

Tribal Board President Tony Sanchez Jr. also made a special guest speaking appearance in support of the organization.

“It is always great when people come to our property, especially this type of group,” President Sanchez said. “It is nice that people can also recognize the challenges we (Seminoles) have overcome. I was honored and overwhelmed with the chance to address everyone.”

“I believe in the fact that you have to be an Indian 24 hours a day, and we (as Natives) have to continue to protect our sovereignty through these types of events,” he continued.

Also in attendance throughout the event were Tribal Council Rep. Andrew J. Bowers Jr. of the Brighton Reservation and Hollywood and Big Cypress Tribal Board Reps. Christopher Osceola and Joe Frank.

Margo Gray-Proctor, chairwoman of the Board for NCAIED, said with more than half a million businesses represented by NCAIED, the generosity and example the Tribe has set by their own success and as the host for the event was a great example of Native comradery and leadership.

“We (NCAIED) want to promote Native-to-Native buying and business, and the Seminole Tribe has been so good to us. We have begun such a close relationship with them. They have been so gracious,” Gray-Proctor said.

In its third year, another featured aspect of NCAIED was the 40 under 40 list, which highlighted and recognized the brightest Natives in all fields of work across the U.S. younger than the age of 40. It celebrates their accomplishments in business, community and the personal aspects of their life and included Tribal attorney Travis Trueblood.

NCAIED is a nonprofit organization, founded and directed by Native Americans, that commits itself to developing businesses for Indians. It is the first national organization solely dedicated to developing American Indian economic self-sufficiency through business ownership, according to its website. It was created by American Indians in Los Angeles, Calif. in 1969 and was originally named the Urban Indian Development Association (UIDA). For more information, visit www.ncaied.org.