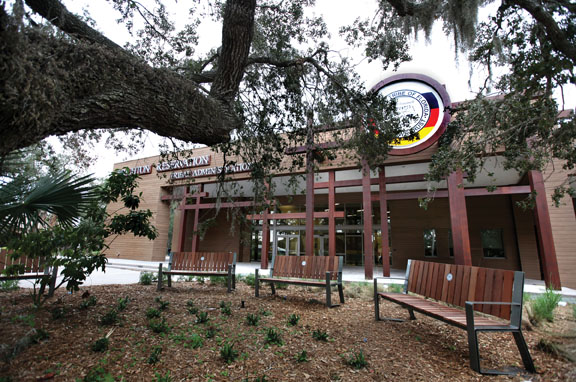 BRIGHTON — Employees in the Brighton administration and public safety buildings have been hard at work in their new offices since May, but tours were given June 5 to familiarize community members with the 111,000-square-foot facility.

The new home of 23 tribal departments, including Seminole Police and Fire Rescue, took slightly longer than two years to complete. Designed by Zyscovich Architects of Miami, the $27 million project was built by Seminole Stiles.

The 11-acre parcel was constructed to feel like a campus, complete with chickees nestled among the ancient live oaks between the administration and public safety buildings. The buildings tout green features, including solar hot water, siding made from recycled wood and energy saving motion sensors on all office lighting.

The administration building features clean lines, high ceilings and tile floors. Historic Seminole photos, many of which showcase Brighton’s involvement in the cattle industry, were made into large murals to adorn the walls.

The public safety building contains a lobby with a triage room so paramedics can treat small injuries that do not warrant trips to the hospital, while the other side of the lobby contains a police dispatcher, on duty 24/7 every day of the year. The lobby walls are bullet resistant.

“We always have a rescue on the reservation to provide the same level of service you find in Big Cypress and Hollywood,” said Fire Marshal Robert Brown. “We use a helicopter for critical patients.”

The public safety building also has a dormitory to house firefighters during their 24-hour shifts, but it can also be used for police personnel in emergency situations. In addition, a large communal kitchen and a gym are shared by firefighters and police officers.

“Firefighters have to have high-functioning lungs,” Brown said. “The gym has weights and aerobics machines to keep them fit.”

Seminole Police Capt. Victor Madrid showed off the law enforcement side of the building.

The emergency operations center is lined with large monitors on the walls to keep officers apprised of other agencies’ actions during emergencies such as natural disasters, hurricanes, fires, chemical spills, floods or plane crashes.

“It’s like a beehive in here during an emergency situation,” Madrid said.

The SPD facility has an armory for surplus and confiscated firearms, an evidence room, intake area with a gated entryway and holding, and interview rooms outfitted with audio and video recording capabilities. Programs housed in the building include youth services, Government Grants Department and Police Explorers.

“This building was built with the future in mind,” Madrid said. “It was intended for growth. They won’t have to invest in another building for many years.”