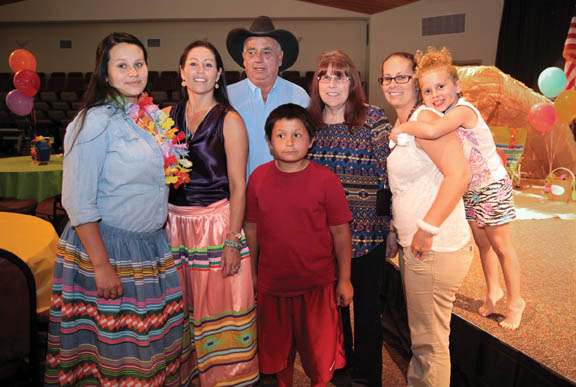 BRIGHTON — After a career of nurturing young minds and minding the books at Billy Osceola Memorial Library in Brighton, librarian Debbie Johns has turned the page and retired.

To mark the occasion, family, friends and colleagues lauded her during a retirement party May 22 at the festively decorated Veterans Building. A fixture in the library for more than 22 years, Johns said the best part of the job was the children.

“I’ve seen the generations grow. I have kids now whose grandparents came into the library,” she said.

Johns became site supervisor at the library in 1999. She said she wasn’t sure she could handle the job but later discovered it was a great confidence builder.

“It gave me the ability to stand up and talk to people,” she said.

Johns said she loves library science because of its organization.

During the retirement party, Johns’ peers showered her with accolades. Words such as intelligent, well-read, kind and nurturing were used in letters written to her and read aloud by Norman “Skeeter” Bowers.

“You were the go-to person at the library and you taught me so much,” wrote library cataloger Robin Hayes. “At first you were my boss, but you became my friend.”

Brighton Board Rep. Larry Howard thanked Johns for the work she performed in the community, and Chairman James E. Billie presented Johns with retirement gifts that included a paperweight with the saying “Live well, laugh often, love retirement” and a vacation to Hard Rock Hotel Cancun.

“You know the ins and outs of the library,” said cultural events specialist Lewis Gopher. “You will be missed by co-workers and by the kids, too.”

Bowers also thanked Johns for her dedication to the children and for keeping up with changes in technology.

“I have mixed emotions, joy and sadness,” he said. “When you get to the crossroads of retirement it must be a tough decision. But I’m glad you made yours and hope you enjoy your retirement.”

Natasha Hayes, library site supervisor at Diane Yzaguirre Memorial Library, was near tears as she spoke. She told Johns that she was her “second mom” and that she will be missed. Hayes wished her the best during her retirement.

However, not everyone was so easy to let Johns go gently into years of relaxation.

“Happy retirement,” said the Chairman’s administrator Danny Tommie. “You have 30 days to change your mind.”

But that’s unlikely; Johns said she looks forward to spending time with her 11 grandchildren.