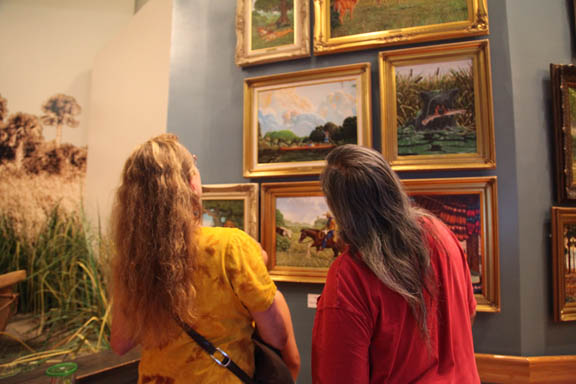 BIG CYPRESS — The life and art of a longtime friend of the Seminole Tribe were celebrated June 20 at the Ah-Tah-Thi-Ki Museum.

Attendees agreed that Guy LaBree would have appreciated the camaraderie at the opening reception to an exhibit highlighting the work of the late artist. LaBree died suddenly on New Year’s Day at 73.

“Guy would have loved this,” Florida folk singer Mac Martin said as he waved his arm over a sea of LaBree’s friends, family and fans who gathered at the Museum’s grounds for the opening of “Guy LaBree: Painted Stories of the Seminoles” that launched a five-month run. “Guy loved these types of get-togethers – music, great food and all his buddies hanging out.”

Martin, an Arcadia real estate agent, lives near the small country home where LaBree spent decades out in the DeSoto County outback.

“It’s such a shame he went so soon, but I am so glad the Seminole Tribe has honored him this way,” Martin said.

From a young age, LaBree was afforded an understanding of Seminole culture. He shared the Indians’ love of the South Florida outback. He combined talents with storyteller Betty Mae Jumper to produce the book, “The Legends of the Seminoles.”

Only a few months before his death, LaBree received the Florida Folk Heritage Award.

In a special area of the Museum, curator of exhibits Rebecca Fell, exhibits fabricator Nora Pinell-Hernandez and exhibits coordinator Siobhan Millar recreated the humble studio where the artist painted hundreds of brightly colored, distinctive oil pieces over his half-century career. Included was the rickety old easel, LaBree’s old favorite cowboy hat and the enormous palette that contains oil paint droppings and brilliant mixtures from every painting he ever created, including those that hang in the Smithsonian and other museums around the world.

“That’s the only [palette] he would use. It was crazy. It must weigh 70 pounds,” said Pat LaBree, his wife and business partner of 53 years.

Longtime Seminole friends of the artist, including Alan Jumper, paid homage to the pal they first met in the 1950s at Dania Elementary School. Jumper was first to suggest to LaBree to paint the Seminole culture and history.

“He knew us. He hung out with us all the time. He knew our ways better than any white man,” said Jumper, who, along with Chairman James E. Billie and President Mitchell Cypress, provided expert advice over the years as LaBree fashioned his paintings.

“I don’t know what I’m gonna do now,” said President Cypress, who owns a large LaBree painting depicting images of his dreams and family members. Each time a baby was born, President Cypress would bring the painting to LaBree to add another image to the canvas. “I know I’m sure gonna miss him.”

Seminole poet laureate Moses Jumper Jr. recited his poem “The Barefoot Artist Guy LaBree” in the gallery, which includes LaBree’s painting of a Seminole warrior (who resembles Moses Jumper Jr.) astride a horse. LaBree surprised many of his Seminole friends by including them as characters in his paintings, often in different historical periods. His specialty was the Seminole Wars of the 1800s.

Strumming her guitar and belting out her unique Seminole story songs, Rita Youngman led a lineup of Florida musicians – all friends of LaBree – who kept the music going outside, and later inside the Museum when the rains threatened.

“Guy was like a father to me. I felt very close to him,” said Youngman, who is considered one of the top collectors of Guy LaBree artwork.

“But you know what, if Guy was here, he’d be uncomfortable with all this attention. He was a very humble man,” Thomas said.

Paul Backhouse, director of the Museum and Tribal Historic Preservation Officer, arranged with Pat LaBree to display her husband’s personal items. He said he believes the exhibit will be well-received, especially among Seminoles.

“Everyone knew Guy LaBree, or at least were familiar with some of his paintings. They are in government buildings and homes all over the Seminole Tribe,” he said. “To think that he created all of those great works of art from that little studio is mind-boggling. I hope everyone gets a chance to see this exhibit.”

“Guy LaBree: Painted Stories of the Seminoles” is open through Nov. 15 in the Ah-Tah-Thi-Ki Museum’s Nook Gallery.