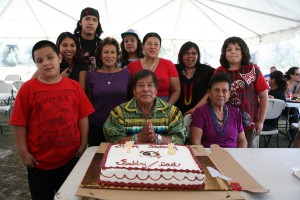 LAKELAND — Seminole Tribal elder Bobby Henry, known as The Rainmaker, celebrated his 75th birthday on Feb. 4. Family and friends joined the much revered medicine man for the festivities at the Tribe’s 900-acre Polk County property.

Born in an Indian village near Ochopee on the Tamiami Trail, Bobby has no birth certificate or official records documenting his birth. Fifteen years ago, however, the U.S. government issued Bobby a passport after extensive research by The Seminole Tribune found sufficient evidence of his existence (and age) on various American Indian census rolls, missionary lists and other Southeastern Tribal documents.

“I feel fine. Not old,” he said. “Might be a little bit harder to jump up into my truck, but I can still build a chickee and carve a canoe!”

The day-long event featured a catered meal and a birthday cake served up by the medicine man himself. Dozens of children ran about the beautiful green landscape near a large chickee where the former Tampa residents often go for meetings and parties.

“I got everything I need but one thing,” said Bobby, the familiar smile spreading over his face. “A village!”
He was referring to the Seminole Tribe’s application to have the Lakeland property put into federal trust status, now meandering its way through the complicated federal system.

For more on Bobby Henry, read the profile of his life, “Bobby Henry: good medicine.”