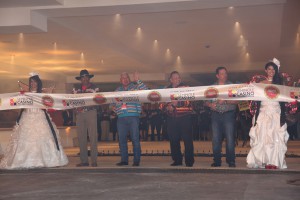 COCONUT CREEK — Seminole Casino Coconut Creek continued its rise in the South Florida casino scene with its grand reopening on Feb. 2, after undergoing a $150-million expansion.

Tribal officials and guests opened the day with a Tribal procession, including a Seminole Stomp Dance and a live alligator. Pyrotechnics lit the media-heavy scene.

“Words can’t describe how I feel today,” said Seminole Casino Coconut Creek President Steve Bonner. “I speak for the 1,700-plus employees when I say this is a great day.”

The opening ceremony culminated with the unveiling of the casino, led by special guest Ty Pennington, the well-known host of ABC’s Extreme Makeover: Home Edition. He and the hundreds of Tribal guests and patrons in attendance yelled those three famous words, “Move that bus!”

“We thought that not only was he (Pennington) appealing, but he was a perfect fit, especially with him being involved before in the Immokalee event a few years ago,” said Tribal Board of Directors President Tony Sanchez Jr. “He’s been very gracious as always, and we appreciate him being a part of it all.”

Pennington said he was pleased to attend and support the Tribe’s casino, which employed nearly 2,000 construction workers; created 800 new full-time jobs with benefits with its expansion; and doubled the total number of permanent employees to nearly 1,900.

“The Seminoles are great,” Pennington said. “Giving so many jobs to so many people is a wonderful thing.”

Pennington joined Bonner in presenting a $20,000 check to one of the casino’s favorite charities – the Coconut Creek foster care facility SOS Children’s Village – for a new roof makeover.

Later, the popular rock group Foreigner concluded the day by performing some of their classics onsite in concert. 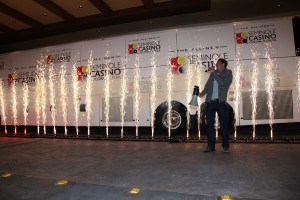 Newly renovated, the first-rate casino now houses accommodations on par with the best in the state including: a second-floor, non-smoking, 9,000-square-foot Stax Poker Lounge with 30 tables, which includes a high-limit room; a now 100,000-square-foot casino floor accommodating more than 2,300 slot machines; a doubling in the number of table games to 65; and a new casino promotions staging area.

The new Player’s Club is the first of its kind in the United States, featuring revolutionary electronic guest interaction technology to eliminate guest waiting lines and to immediately immerse players in the casino’s action.

Seminole Casino Coconut Creek is no stranger to growth; it underwent its first major expansion in 2007 at approximately $32 million with popular additions, such as the Nectar Lounge and the Fresh Harvest buffet restaurant. This time around, three restaurants have been added – the upscale NYY Steak, Sorrisi Italian Restaurant and the New York-style 1st Street Deli.

“It’s all another example of the Tribe creating something that sets the standard and can compete with anything going on in Vegas,” Seminole Gaming Chief Executive Officer Jim Allen said.

President Sanchez was also thrilled with the new facility. “From the time we began talking about and having this property, we never thought it would turn out to be like it has,” he said. “Our whole gaming history has always been about uncertainty and challenges. For us, it’s our responsibility to keep it going. Words can’t describe it all.”

Kathryn Stolarz contributed to this article.