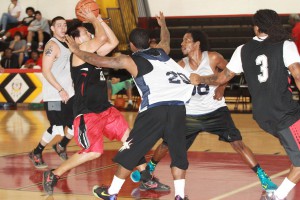 BIG CYPRESS — As the champions hoisted their prize at midcourt, the large framed photo of U.S. Marine Lance Cpl. Herman L. Osceola on a wall overlooking the court served as an appropriate witness to the conclusion of the three-day basketball tournament held in his memory March 20-22.

Big Town earned the right to grasp the championship trophy by outlasting four other teams to win the men’s title in the 29th edition of the Herman L. Osceola Memorial Basketball Tournament. The event serves as a tribute to Osceola, who died in a military helicopter crash in 1984.

Open to Native American players, the tournament has been held annually since the tragedy, which occurred before several players in this year’s games were born.

“Next year will be 30. It’s hard to imagine it’s been that long; it seems like it was just yesterday that my brother left,” said Veldina Osceola.

In some ways, Veldina’s big brother hasn’t left. Remembrances of Herman abound. In addition to the photo and another one near a doorway, a life-size bronze statue in his likeness proudly stands outside the entrance of the gymnasium that bears his name.

Veldina said Herman was one of the first Recreation workers at the gym when it opened.

“He would help at the tournaments and take the kids on field trips,” she said. “He really enjoyed the kids. He loved spending time with them. He loved working weekends to keep the kids busy.”

Big Town held off a determined Flight squad in the men’s division championship March 22. The Outlaw Women won the two-team women’s division – two games to one – against the Ball Hawgs March 21. The double-elimination tournament started March 20 with dinner and games in the Legends division (age 35 and older), which drew three teams and was won by Old School.

“The first night we do Legends, which is people that (Herman) grew up with and are still playing,” Veldina said.

Veldina recalled earlier years when games would last long into the night and beyond.

“On Friday and Saturday, they would play until like 2 or 3 in the morning because there were so many teams,” she said. “It’s kind of slowed down. When it was first a tournament it was real huge. We’re hoping it will grow back up.”

Spectators were treated to an extra game in the men’s championship round. After cruising through the winners’ bracket, Big Town needed just one more win to claim the title. Flight, on the other hand, emerged from the losers’ bracket and faced the difficult task of having to beat Big Town twice.

Big Town appeared to have the championship sewn up with a 54-52 lead and only 2.5 seconds left in the first game. However, Big Town committed a foul when Flight’s Josie Balantine and DeForest Carter worked a give-and-go for a desperation shot from well beyond midcourt. The shot missed, but Flight made three ensuing free throws with no time left to notch an improbable one-point victory and force a second game.

The winner-take-all game didn’t match its predecessor in drama as Big Town roared to a 42-23 lead at halftime and went to post a 76-56 win behind a bevy of 3-pointers from former Boyd Anderson High School standout Jerome Davis.

During a brief ceremony after the final game, Veldina, her sister, Caroline, and their mother, Ruby, presented Big Town with the championship trophy and tournament sweatshirts.

Big Town forward Jay Liotta said the team recently returned from a tournament in Wisconsin, where it finished second. Liotta said the squad is comprised of players from the Cherokee, Comanche and Miccosukee Tribes.

Teams only had one or two substitutes, so by the end of the tournament, fast breaks became slow jaunts.

Balantine said the runner-up spot for Flight was the team’s best-ever finish in the tournament. Flight players are from Big Cypress and have been teammates for several years.

Shots Up finished third followed by Tropics in fourth and Prime Time in fifth.