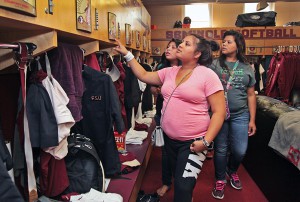 TALLAHASSEE — About a dozen Tribal softball players were taken out to the ballgame in Tallahassee March 15 to see the Florida State University Seminoles’ softball team sweep the North Carolina State Wolfpack in a doubleheader. Also, an alumni game that featured former Seminole players was held as part of the team’s 30th anniversary of fastpitch softball.

FSU head coach Lonni Alameda met with the Tribe’s middle and high school girls in the team meeting room, where they discuss strategies, statistics and games, and gave them an inside look at the softball program.

“There is a lot of history and rich tradition from the people who played here in the past and from you guys, whose name we wear on our jerseys,” Alameda told the girls.

She described the board at the back of the room on which they evaluate every game. The team’s objectives include having quality at-bats, getting lead-off outs on defense and not having back-to-back failed plays, she said.

The strategies have paid off with a 24-4 record halfway through the season. The Seminoles are ranked 11th in the country by ESPN.com/USA Softball.

Alumni player Carol O’Domski, 1980-81, who tagged along for the meeting, was impressed by the board and wanted the Seminole girls to know it.

“The four-plus run column is filled with yeses,” said O’Domski, of Key Largo. “That is coaching and dedication by the players. You are at the FSU complex and not many people get this tour by the head coach.”

Alameda wanted Seminole kids to understand what playing at the college level entails.

“Kids can make it here as a walk-on if they are motivated,” she said. “When they get around student athletes they see they are normal people and may think they can do it, too.”

The Tribal girls also toured the athletic facilities – including the baseball and football stadiums, the locker room and the weight and conditioning rooms shared by all teams – with FSU player Rylan Harvey.

“I came here because of the coaches and it was the best decision I ever made,” said Harvey, a freshman. “We hang out together as a team, but it’s nice to have friends in other sports.”

In the evening, the group attended the doubleheader at the JoAnne Graf Field, named for the former Seminoles coach who guided the team from 1978-2008. Graf attended the game. Before the first pitch was thrown, the announcer introduced the Tribal softball players in the stands, as well as Graf, other former coaches and alumni players throughout the night.

“It was a really cool experience,” said Raven Frank, 16, who is considering attending FSU. “I was surprised by how many trophies they have and how huge they are.”

“I liked talking to the coach,” added Jaide Micco, 18. “She likes sporting our name on the jerseys; it made me feel good.”

JoAnn Ferrieri, who runs Rhino Softball and works with the Recreation Department to teach softball weekly on the reservations, organized the trip.

Ferrieri, who also played professionally in Europe and on the USA team that won a gold medal in the 1987 Pan American Games, would like to have these tours annually to expose girls to a higher level of play.

“We wanted to introduce them to what it looks like from the inside,” said Ferrieri, who played college softball at California State University, Fullerton. “My goal is to inspire kids to go to college, and softball is one way to do it.”