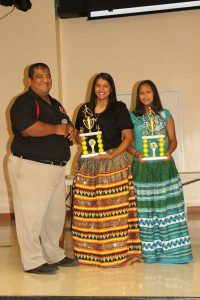 BIG CYPRESS — A chapter has officially closed for the Ahfachkee Warriors’ athletic program.

On April 24 at the Big Cypress Community Center, the Tribal school’s spring seasons of baseball and softball – and second full year of operation in athletics – reached its climax with a special awards ceremony for its athletes in the two sports.

To highlight the Ahfachkee Warriors’ spring action, the following honors were handed out at the awards ceremony: