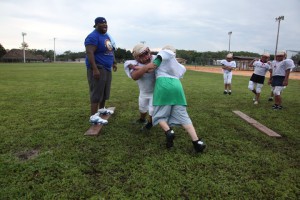 BIG CYPRESS — Nothing says fall like football, and kids in Big Cypress are working on the gridiron learning the skills and strategies necessary to succeed on the field and off. An enthusiastic group of boys has taken to the game with gusto, as demonstrated at one of the team’s first practices.

“The kids are excited for this,” said Josh Jumper, Recreation site manager. “They are all first-year players, so we are starting from scratch.”

This is the first year since 2006 that Big Cypress has organized a football program. The team, comprised of 9- to 12-year-olds, will play league teams from other communities. The season will consist of seven Saturday games, all of them played away since Big Cypress has no football field.

Despite the rain during one recent practice in September, the kids and coaches ran through their drills repeatedly. Defensive players practiced how to tackle the opponent effectively, while the offense practiced the art of handling the ball and learned to understand the shorthand of play calls and to respect to the leadership position of the quarterback. Coaches worked diligently with an equal amount of toughness and encouragement.

“We want to open the door for every sport because what they learn will help the kids get through life,” Jumper said. “We expect them to learn discipline, commitment, leadership and respect from sports.”

All five coaches played sports in high school and/or college, so they know about the commitment it takes to play on a team. Tavarus Holmes drilled the defensive players until they got the form right. Although it looks easy to take an opposing player down, players learned the right way to tackle to avoid injury.

During the offensive drills, head coach Kelvin Robinson taught the players the finer points of the game. These players must inform officials that they’ve reached the line of scrimmage, understand what the quarterback means when he calls out a series of numbers and, of course, hold on to the ball while running to the end zone. Robinson made them wait in the huddle for the play while teaching them the importance of time management.

“Every delay pushes you back another 5 yards,” he explained to the players. “You have to line up quickly.”

Jumper will also implement other programs this year at Big Cypress: Baseball, basketball, golf and swimming programs are in the works.

“Our goal is to have all different avenues available for kids to play sports,” Jumper said. “I expect kids to get great lessons from sports.”