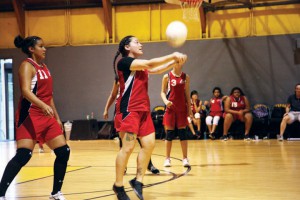 BIG CYPRESS — Volleyball is a game of skill and athleticism, and the Ahfachkee girls’ varsity team has those qualities. The players may be young and inexperienced, but they show an ample amount of heart on the court.

“This is a growing year for them,” head coach Bernadette Schyvinch said. “We have a lot of young players who haven’t been exposed to the game as much. They are all learning what they need to do and how they need to cover it.”

This is the first year the school has a varsity team and only the second year of the volleyball program. Most of the players are all-around athletes and also play basketball and softball. Schyvinch’s goal for the players is to become better hitters and improve their skills throughout the season.

“We want them to grow as a team and learn from each other,” Schyvinch said.

During a match against Moore Haven High School on Sept. 13, the team played hard but didn’t win against the more experienced team. The players know they have a lot to learn and are willing to do what it takes to excel.

“I like volleyball and played last year,” Taylor Fulton said. “The biggest challenge is spiking the ball since I’m short.”

“The best part of the game is spiking the ball on people,” Danni Jae Tommie added.

The rest of the season will give the team a chance to bring their skills level up to that of their enthusiasm. It will be an exciting season.