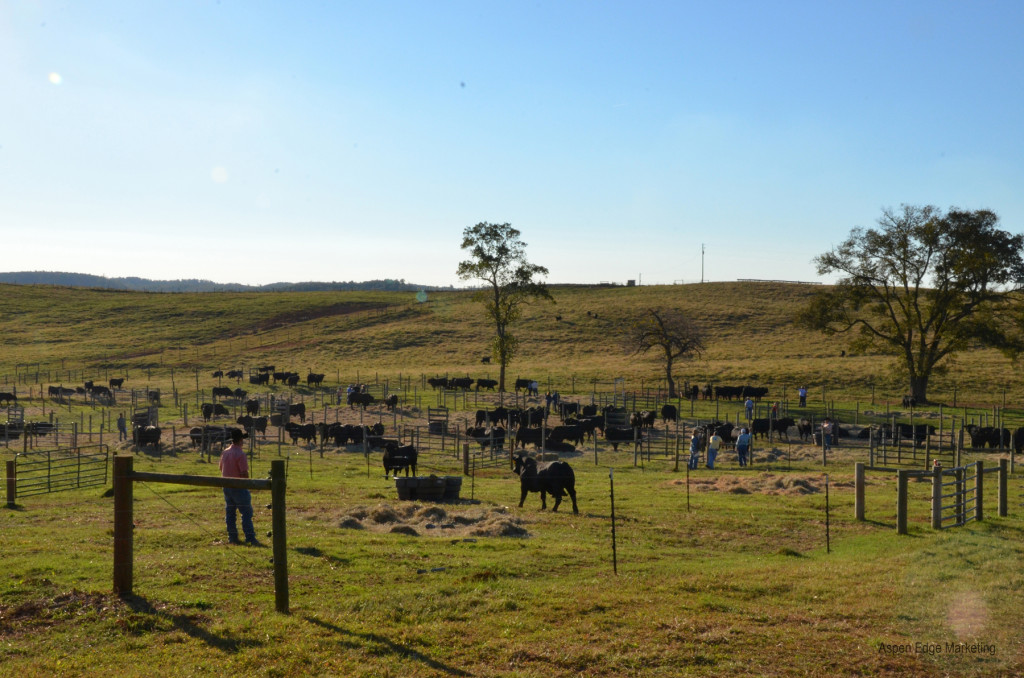 FAIRMOUNT, Ga. — The Board of Directors’ recent purchase of Salacoa Valley Farms in Georgia has given them access to the third-largest purebred Brangus cattle operation in the country.

Primarily a seed stock operation, the farm produces purebred bulls and heifers for cattlemen who want to upgrade their cowherds. A typical commercial calf costs about $700; a purebred calf can cost anywhere from $4,000 to $30,000. Using high-quality bulls increases the weight of the calves by 50 to 100 pounds, which translates into better beef and larger profits.

“We couldn’t always afford that quality,” said Alex Johns, Natural Resource director, about the Salacoa purchase. “Now we’re getting better bulls at a cheaper price, which has an economic benefit, and we are installing better genetics into our herd.”

Johns first learned of the opportunity while attending a Florida Cattlemen’s Association meeting in September. A friend told him David Vaughn, the owner of Salacoa Valley Farms, was ill and wanted to liquidate his nearly 1,000-head cowherd at an auction scheduled in 45 days.

Johns saw a chance to avoid paying other bull producers for seed stock and to gain access to superior genetics. He also believed it would increase the quality and quantity of Seminole Pride Beef. He contacted the Board and recommended they jump at the chance to purchase the entire operation.

“From a business perspective, it is best for us to absorb this and make the best of it,” Brighton Board Rep. Larry Howard said. “We’re amping up our genetics and you can’t get any better than that. Eventually they will become part of our herd.”

Johns, Rep. Howard and Tribe CFO Mike Ulizio toured the facility and liked what they saw.

“We thought the price they were asking was fair but negotiated a better price – 20 percent below the appraised value,” Johns said.

The sale included all livestock, equipment and hay on the 4,500-acre farm but not the land, which the Tribe will lease. The Tribe will also get the revenue generated from leasing a portion of the land for farming and hunting.

Salacoa holds two cattle auctions per year, which will continue as scheduled. The money raised at the auctions typically keeps the farm running until the next auction; any additional profits will benefit the Tribe’s cattle operations.

Located in the foothills of the Blue Ridge Mountains north of Atlanta, the Salacoa Valley Farm offers its customer base a convenient location, preventing them from traveling to big cattle-producing states like Texas or Kansas to buy cattle.

“We sell to 11 different states; our goal is to be the largest breeder in the Southeast,” Johns said. “About 30 percent of the bulls make their way to Florida, either to us or another customer.”

Johns said they will use Salacoa’s superior genetics to infuse into the Tribe’s commercial cowherd to increase the value of the calves. Johns also wants to increase the supply for Seminole Pride Beef.

“Even a small piece of the larger market requires a larger-scale operation,” Big Cypress Board Rep. Joe Frank said. “Putting our brand on a certain genetic line allows us to expand our market.”

The management and staff of Salacoa remain in place. Christopher Heptinstall, general manager of Salacoa, started in the cattle industry in 1994 and has worked at Salacoa for about four years. With the new ownership, he continues his plans to double the size of the cowherd, currently comprised of 1,117 cows, heifers, calves and bulls, and to increase the number of mature cows from 650 to about 1,000.

“I’ve known Alex for a while and we’ve sold some bulls to the reservation,” Heptinstall said. “The Tribe will be able to facilitate the growth faster than we were going to; we’ll be ramping up the embryo program.”

Once the cowherd doubles in approximately three years, Johns plans to bring some bulls to Florida. To meet the goal, they will artificially inseminate cows, retrieve the embryos, implant the embryo in a surrogate of lesser genetic quality and get six calves out of a cow instead of one. Veterinarians and technicians will perform the embryo transfers, in-vitro fertilization and semen production.

“Having six full siblings on the ground at one time would take seven to eight years naturally,” Johns said. “This speeds up the process.”

Some embryos and semen will be available on the open market. It is a small but important part of the business, Johns said.

“It lets people know those genetics are available,” he said. “We want people to utilize the cattle and word of mouth spreads.”

The Salacoa operation is all about quality, he said.

“The lower end of these bulls is better than the more expensive commercial bulls we’ve been getting for Brighton and Big Cypress,” Johns said. “It takes years to put together a purebred operation and if you disperse it, it’s like letting go of family.”

For nearly 30 years, Salacoa was a family owned farm. In addition to keeping the cowherd intact, the Tribe has kept the staff together.

“The employees are like a family and we work closely together,” Heptinstall said. “And the herd has a personality like a family. There is a lot of interest in our younger generation of cows. We have always been very selective about the animals. We’ve built something that is really advantageous, especially for the branded beef program.”

When Heptinstall heard about Vaughn’s plan to disperse the herd, he had offers to work elsewhere but decided to stay “until the last bale of hay was moved off the place.” He is pleased to stay and work for the Tribe.

“Those guys took our goals and plans and made them a bit larger,” he said. “They bought a business that was up and going and plan to make it better.”