Skip to content
You are here
Home > Community > Emateloye Estenletkvte: Polly Parker got away 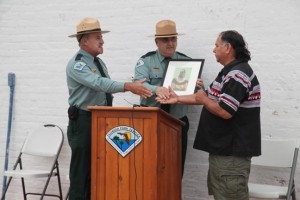 GULF OF MEXICO, Fla. — A thick fog began to steal the faraway horizon from the moment Capt. Mark Hubbard aimed his double-decker catamaran Dec. 1 to the open Gulf through the opening of the John’s Pass Bridge.

For more than 12 hours, the miasma crept closer to the boat, registered under the name Florida Fisherman II, but acting the part of a mid-19th-century steamboat known as the Grey Cloud.

The Grey Cloud took more than two dozen voyages during the Second and Third Seminole Wars from the Fort Dade stockade on Egmont Key at the mouth of Tampa Bay to Fort San Marcos, just south of Tallahassee on the Florida panhandle.

There, the boat would refuel with fresh-cut wood and continue its trip, hull full of captured Seminole Indians, up the Mississippi River at New Orleans and north toward Arkansas.

Once there, those Seminoles still alive were herded from the boat to join the Cherokee and Choctaw, and forced to walk, by men on horseback with whips, to the new Indian territories in Oklahoma.

“I kept trying to imagine how it was for the Seminoles being taken up the Gulf like that,” Norman “Skeeter” Bowers said. “I mean, the fog was so thick we couldn’t see much further than the boat. How depressed those Seminoles must have been, forced to leave their homeland for a place they didn’t know, in conditions like this.

“Then I remembered, they were probably all locked up deep in the hull of the boat. They couldn’t see anything at all. That was worse. How painful that must have been,” Bowers said.

Bowers was one of five Seminole Tribal members who accepted Chairman James E. Billie’s invitation to take the marathon boat trip along the same route that hundreds of captured, deported Seminoles were forced to take in the early 19th century, when U.S. policy forbade any American Indian east of the Mississippi River. For most of the Eastern Indians, the deportation required a long and often deadly walk – the infamous Trail of Tears.

The Seminoles, however, began their deportation with a voyage from the Egmont Key stockade.

“I don’t know how she did it, but I am glad she did. Because, if she hadn’t escaped, we would not be in Florida now,” said Willie Johns, a Tribal historian and community outreach specialist from Brighton. “Polly Parker’s escape was a brave and defining moment in both Seminole and American history.”

Johns carried two rare photographs of Parker, in whose memory the trip was devoted.

On May 5, 1858, during one of the Grey Cloud’s Gulf journeys, the young Seminole woman escaped. Despite soldiers and dogs and a posse that hunted her for weeks, Parker traveled across the Florida outback for nearly 200 miles and slipped safely back to the Lake Okeechobee area.

Chairman Billie wanted to honor her progeny, including many leaders and prominent Seminoles over the past 150 years, by recreating her legendary trip.

“I wonder what kind of Tribe we would have today if Parker had been killed or caught and sent to Oklahoma,” he said. “Her brave act saved our Tribe.”

Parker’s exploits were well-known in the early part of the 20th century. She lived past 100 years old and was well-known among Seminoles of the era. The years since, however, have dulled the memories of her escape in favor of war stories like Osceola stabbing the peace treaty and the Seminoles’ massacre of Major Dade.

“It’s been handed down in my family. We have always known about it,” Bowers said. “But, I guess so much time has passed most everyone else forgot about it.”

In August, Chairman Billie sent an advance group of Tribal members and staff to Egmont Key to begin planning the Polly Parker voyage. While there, the group discovered that the tiny island itself, both a Florida State Park and a National Wildlife Refuge, was falling into the sea. Ongoing coastal erosion, caused partly by huge ships passing nearby heading for the ports of Tampa and Manatee, has shrunk the island to less than half its original size, threatening the world’s largest brown pelican rookery and putting Seminole gravesites on the island at risk of being submerged.

A letter from Chairman Billie to Secretary of the Interior Sally Jewell reminding her of the federal responsibility to protect Native burial sites has not yet been answered.

“That’s an ulterior motive for this event – to save Egmont Key,” Johns said. “There are a lot of projects ahead of Egmont waiting for funding. The squeaky wheel gets the grease. You know what they say.”

The trip lasted about an hour, from medicine man Bobby Henry’s blessing of the boat to the at-sea transfer of passengers onto a smaller ferry boat (the larger boat was too big to dock any closer to Egmont).

There, after the smaller ferry floated right up to the sandy beach, the disembarked passengers were greeted by Egmont Key State Park manager Peter Krulder and Florida State Parks director Donald Forgione, who was making his first trip to Egmont, one of 171 state parks in Florida’s national championship chain.

“I am honored to be associated with this event,” Forgione said. “The Florida State Park system has always enjoyed a great relationship with the Seminole Tribe.”

Fort Myers resident Woody Hanson displayed several notebooks of old photographs and historical documents that his grandfather created many decades ago. A crowd of Seminoles swirled around avidly perusing the photos taken by Dr. Stanley Hanson, a trusted adviser of the Seminole-Miccosukee Indians in the 20th century. Woody Hanson, now in his 80s, is seeking a venue for his collection.

“It should stay with the Tribe,” said Bobby Henry, who noted there were many photos of his family members in the Hanson Collection. “We’ll take care of it.”

Once again, after the group said goodbye and rode the beached ferry back out to the Florida Fisherman II, gangplanks were lowered and there was a transfer of passengers at sea. The fog had worsened and it was not long before Egmont Key and the entire west coast of Florida disappeared from view.

“This is the worst we’ve seen this fog in a long time,” said Capt. Hubbard, whose three-man crew and galley cook helped the travelers get comfortable for what would be more than 20 hours of Gulf travel at around 10 knots – similar to the speed of the steamboat Grey Cloud.

For the next several hours, the weather held. One could barely see, up ahead, the escort boat provided by the Florida Game and Freshwater Fish Commission (GFC). Somewhere northwest of Cedar Key, that boat turned south and was replaced by another GFC law enforcement craft that would help the Florida Fisherman II navigate the tricky St. Mark’s River channel.

A waiting bus took the group through the city of St. Marks, where city manager Zoe Mansfield and mayor Charles Shields prepared a cookies and punch party for the voyagers, who also toured the perimeter of the old fort.

Also waiting there were Forgione and Secretary of State Ken Detzner, who provided welcoming speeches. As they had done in Egmont Key, Henry gave an invocation and Johns provided an impromptu speech, putting the journey, Parker and the Seminole Tribe in proper perspective. He explained the Tribe’s matrilineal descendants, noting Parker was of the Little Bird Clan and he was a Panther.

“This has been a wonderful event,” said Rachel Porter, coordinator of Florida Viva 500, who helped organize the event. “I am so glad to be able to work with the Seminole Tribe for this event.”

“No need to wait,” Forgione said, directing the immediate installation of Parker’s photo on empty wall space in both Museums.

“This signifies the beginning of a new relationship (between the two state park museums),” Backhouse said. “It’s just amazing that the incredible history of Polly Parker’s escape has stayed in the background so long.”

The next day, after the Seminole mariners landed in St. Marks and were bused to Tallahassee, Forgione took the lead in setting up an impromptu meeting with Detzner and his staff to hear a scientific presentation on saving Egmont Key. Marine scientist Beau Williams, an island restoration specialist for Aquatic Environmental Solutions, was invited on the trip to educate people about the Egmont Key erosion issue.

Forgione invited Seminole Tribal members to crowd into the standing-room only meeting.

“They should know the facts about the problems and the solutions because one day we’ll need them to come forward as well,” he said.

Attendees at the Tribal Historic Preservation Officers meeting were also invited into the meeting.

Williams produced a miniature plastic model of what he called a “wad,” a pyramid with holes similar to the 8,000-pound moveable structures that anchor an ocean bottom and help build back a ravaged beach. Williams described how they work, answering rapid-fire questions from Detzner and others. Forgione promised to begin discussions with the U.S. Fish and Wildlife Service.

“They are the actual owners of the property. We (Florida State Parks) are just tenants there. It’s a very unique situation,” he said.

“That was a great meeting,” Detzner said. “In my job, I mostly hear problems. But here we were talking about solutions. That man answered all my questions. My staff and I are on board. Tell us what you want us to do.”

After a welcome night at the Doubletree in Tallahassee, the group convened at the Museum of Florida History where museum director Jeana Brunson and staff provided a breakfast and special tours, including the famed Museum lab, where hundred-year-old artifacts are processed by state archaeologists. The whole party crammed into the tiny lab, where bits of bone and rusty metal – puzzle pieces of history – were strewn about high tables.

After touring the Museum, the Seminoles and their entourage boarded the bus for the last stop, a visit and lunch at the nearby Mission San Luis, the former home of the Seminole ancestors, the Apalachee Indians. The group was taken through a small museum and on a short walk to the tallest native structure east of the Mississippi River, the Council House.

It served as a ceremonial city hall for the more than 1,500 Apalachee residents at Mission San Luis in the late 17th century. The structure stands five stories tall, circling more than 140 feet in diameter with 72 foot rafters weighing more than 1,000 pounds each.

Bobby Henry took center stage and had everyone join hands in a circle around the fire pit to bless the house.

“You could feel it. Something was going on there,” said Ken Crawford, a retired State Department employee who participated in the blessing of the Apalachee Council House. “I don’t know what it was, but Bobby had made it work.”

Travelers soon gathered souvenirs, gifts and luggage onto two buses – one heading to Hollywood and the other going to Brighton via Tampa.

Each participant was provided a gold “challenge coin,” provided by Chairman Billie, whose schedule did not permit him to attend. On one side is the Tribal Council seal – the chickee backed by medicine colors – and the other side featured an engraving depicting Parker hiding in the palmettos while soldiers in the distance looked for her and the Grey Cloud sat anchored in the St. Mark’s harbor.

Prior to the trip Lorene Gopher, a direct descendent of Polly Parker, and an expert in the Creek language, was asked to provide a title, in Creek, for the coin, something to commemorate the trip. Polly Parker’s Voyage of Tears was suggested to Gopher.

“We don’t have those words in our language,” she said, suggesting, instead the phrase Emateloye Estenletkvte. “Polly Parker got away.”