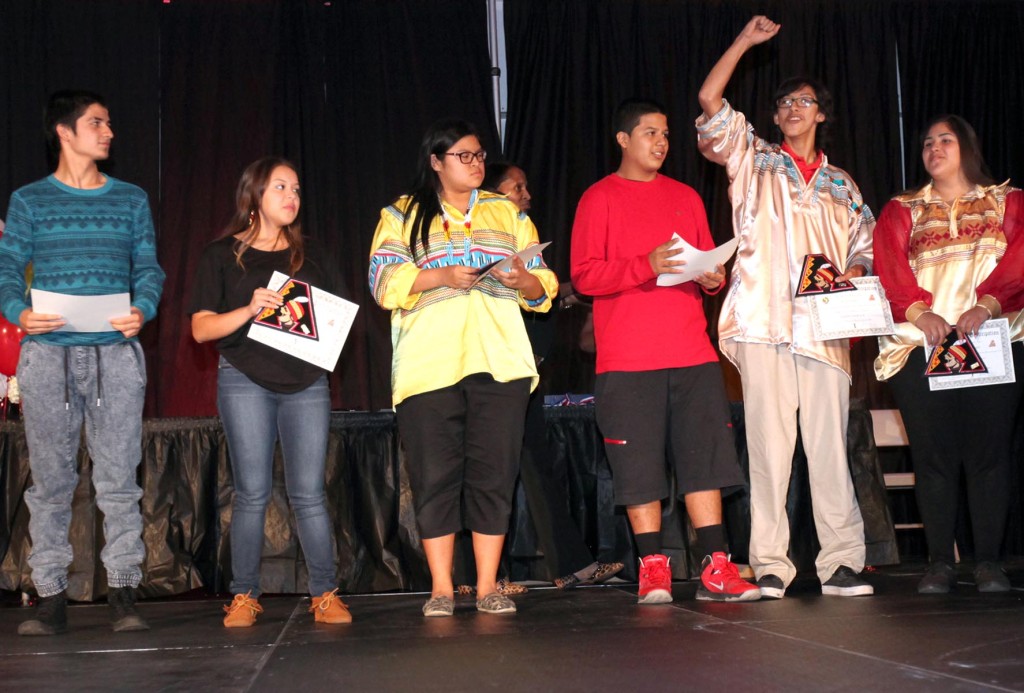 BIG CYPRESS — Proof of a successful sports season isn’t always unfurled in the form of a championship banner.

Triumphs can be found elsewhere, like Edie Robbins making a pair of 3-pointers in an elementary basketball game, or Chelsey Alvarado improving her golf score by 20 strokes, or Nashoba Gonzalez personally recruiting players to save a volleyball season.

Those were among the highlights mentioned at Ahfachkee School’s annual sports banquet May 14 at the Herman L. Osceola Gymnasium in Big Cypress.

A few days shy of his 30th birthday, Ahfachkee teacher and former Florida Atlantic University football standout Jarrid Smith began the evening with a keynote address that encouraged the approximately 35 student-athletes to make good choices. He shared his experience of making poor choices at age 12 after the death of his grandfather Fred Smith.

“When he passed away I was kind of lost,” Smith told the audience. “When you’re lost, you tend to make poor choices.”

At 15, Smith said his choice to play football proved to be a decision that helped pave his path to a list of accomplishments that nearly filled a page in the banquet program and to where he is now as a teacher contributing to the Ahfachkee community and the Tribe.

The former lineman, who was an all-conference player at FAU and earned multiple degrees, told the students that each of them has a purpose.

“If you don’t know your purpose, if you’re not sure, I want you to know that you do have a God-given purpose,” he said. “You cannot change things that happened in the past, but you can make choices today that will change your future.”

After Smith’s speech, Ahfachkee’s past sports season and its players were recognized. Coaches from the elementary basketball and cheerleading teams and varsity basketball, golf and volleyball squads introduced their players on stage, handed out awards and summed up their seasons.

“I think the kids had more fun than I did coaching them, and I had more fun watching them grow,” said elementary basketball coach Joseph Orukotah. “This year we made a statement. We won some games, had fun doing it and I hope to be back next year.”

Elementary most valuable player awards were doled out to Jeremiah Pickup (basketball) and Sarah Robbins (cheerleading).

The golf season marked the 56th year that Amos Mazzant has been involved in the sport. For some of his players on the six-member team, it was their first year.

“It is a sport that is [for a] lifetime. What they have learned this past year, they’re going to carry on for the rest of their life,” he said.

“It’s out in the hot sun, putting up with the rain and lightning and mosquitoes, but the kids came out and practiced, and that means a lot,” said Mazzant, whose young team was led by freshman captain and MVP Troy Cantu.

“They started out kind of slow, ended up getting a little stronger in the end,” said coach O’Bryan White, whose team was led by captain and MVP Issiah Alvarado.

“She would put up a good fight. She would stay in the game. She would hustle. Every time I would tell her to do something on the court, she would look back and say, ‘Yes, ma’am,’” Thomas said.

On the volleyball side, Leilani Gopher captured the MVP award, serving as evidence that hard work pays off.

“You can find her in the gymnasium after school every day,” Thomas said. “She is really good. She practices. She’s smart. She has a lot going for her, and I hope she continues on the path that she is on.”

“We did not have enough girls for volleyball. Nashoba recruited. She called parents herself. She went to houses. She did whatever it took to make sure we had a volleyball season. I thank her so much for that,” Thomas said.

Gonzalez was recognized with an award for being the team’s captain. Later, she received the evening’s final honor: the Warrior’s Award as the school’s overall most valuable player in any sport.