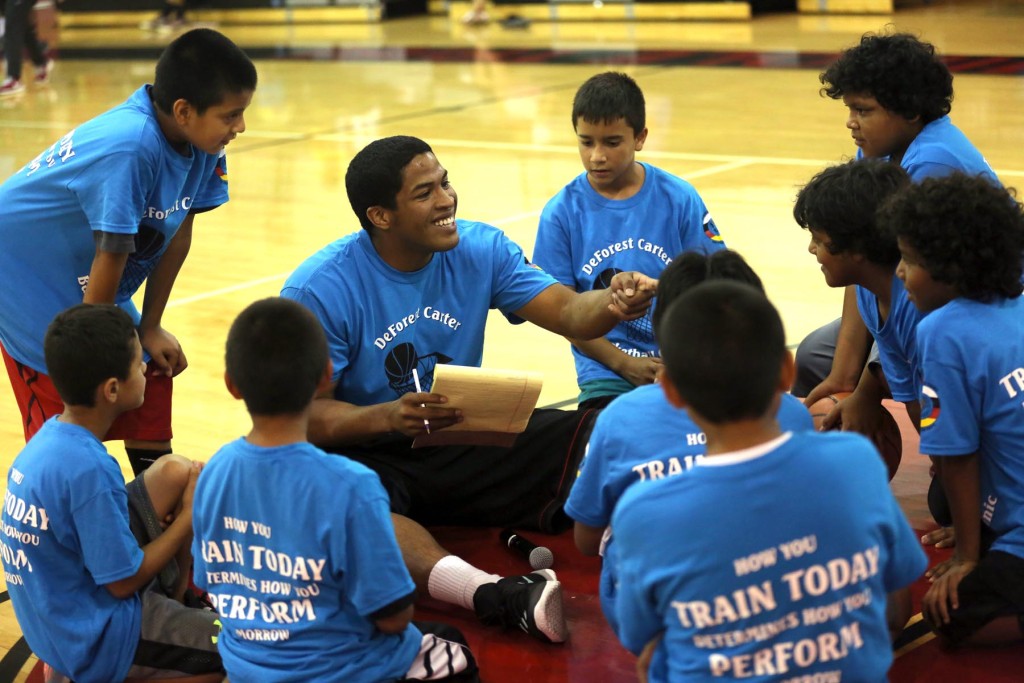 BIG CYPRESS — Brian Johnson drew plenty of attention from youngsters who tilted their heads back to look up at the 6-foot-7 basketball player. Although the eyes were focused on the tallest person in the Herman L. Osceola Gymnasium May 15, the hugs belonged to DeForest Carter.

The record-breaking point guard from Embry-Riddle Aeronautical University (ERAU) received a warm hero’s welcome upon his return to the reservation and gymnasium where he spent part of his youth.

“I couldn’t tell you how many hugs I got when I walked into the gymnasium,” said Carter, 22. “It’s just a blast being able to get so many young kids into the gym.”

About 40 youngsters, all wearing blue T-shirts from the Recreation Department, filled the basketball court for the second annual DeForest Carter Basketball Clinic. Carter ran the three-hour camp with instructional help from his brother Greg, former high school teammate Kyle Simmons, friend Dillon Thomas, and Johnson, who was Carter’s teammate at ERAU. Big Cypress Recreation coordinator Dessie Thomas also assisted, including providing the inscription on the back of the shirts: “How you train today determines how you perform tomorrow.”

In the year that elapsed since the clinic’s debut, Carter shattered records as a senior point guard while leading ERAU to its best record (35-2) and an appearance in the NAIA Division II semifinals. He set team records for most assists and steals in a season and in a career. He garnered a bevy of awards, including First Team All-American, Sun Conference Player of the Year and NAIA All-Star.

Despite the accolades, Carter was more interested in talking about how the kids at the clinic – such as Ahfachkee School’s Ricky Garza – have improved.

The youngsters were broken up by age categories into a handful of stations that rotated so everyone had a chance to practice rebounding with Carter, shooting with Johnson, dribbling with Simmons and sprinting and moving without the ball with Thomas and Greg Carter.

At 6-feet, Corbin Billie, 17, was the tallest youngster at the camp. The Ahfachkee student said DeForest Carter is a role model for him and many other kids.

“I’m really inspired to be just like him,” said Billie, who won a competition award presented by the instructors during a ceremony at the end of the evening.

Giving great passes to teammates is one area that the youngsters know Carter excelled in during his college career, but giving back to his Tribe also ranks high with them.

“It’s real nice,” Billie said. “I’d say everybody appreciates it. There’s not really that many people out here that do that. I think he’s one of the people I can say that made it.”

Brighton Recreation site manager Dallas Nunez brought nine kids to the camp, including several who attended one of Carter’s games during the season.

Although being the “next Kobe” might be out of his reach, Carter said he has decided to give professional basketball a shot, but not until he earns his degree from ERAU. He hopes to finish his academic work this winter or in early spring 2016.

“My coaches told me to finish school first. That’s important. My education is important to me,” Carter said. “I’m going to finish, then I’ll go anywhere. As long as there is a basketball and an orange goal, I’m going to go play.”

Turning pro means Carter could end up just about anywhere on the globe. In addition to the U.S., the professional landscape is dotted with leagues from Argentina to China to Italy and beyond.

As for his clinics, no matter what path Carter’s future takes him, he welcomes the chance to come back to Big Cypress.