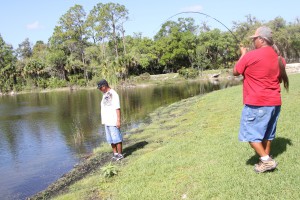 BIG CYPRESS — Noah Jim’s Pond was the place to be for nine Big Cypress Tribal seniors. On the morning of March 13, they competed in their annual fishing tournament.

“Violet is a fisher and everyone here knows that,” said Big Cypress Senior Center activity coordinator Nadine Bowers. “That’s her hobby, so we know what to expect from her.”

Fellow Tribal elder Rudy Osceola was the only Big Cypress male senior to catch a garfish; he lured a 15-ounce fish out of the pond.

“We all know Rudy as a cowboy,” Bowers said. “I didn’t know he could fish. The seniors surprise me sometimes with their abilities.”

Those were the only two fish caught in the competition. Big Cypress Tribal citizen Jerry Balentine, who was one of several Tribal member guests at the tournament, said the lack of wind may have been the reason for the low count.

“It was a good day to be fishing, with the skies being clear out here,” he said. “But they (the fish) weren’t baiting much.”

However, fish weren’t the only things reeled in that day. Tribal senior and competitor Esther Buster accidentally caught a turtle and almost pulled a 12-foot alligator out of the pond.

To Bowers’ amazement, she also hooked a turtle.

“I thought it was a big fish,” Bowers said. “When we pulled ours out in the pond, it wasn’t what we were looking for.”

“I like bringing the seniors out here because they really enjoy the peaceful environment,” Bowers said. “It provides them an opportunity to do something together and gives them some time to talk to each other.”

Big Cypress Tribal Council Rep. Mondo Tiger, who appeared at the tournament, expressed his gratitude to the seniors for coming together for the occasion.

“I’m always lucky enough to be around the seniors,” Councilman Tiger said.

“I was brought up to respect the elders and learn what I can from them,” he said. “That’s been embedded in me since I was a kid and it will never change. The seniors are very, very important to me because they raised me and taught me a lot of things along the way.”