“We’re here to support the fight against breast cancer,” Robinson said. “We wanted to have an event that would bring the whole community together. We just wanted everybody to have fun.”
Breast cancer is the fifth leading cause of death, according to the Centers for Disease Control and Prevention. Players showed their support for the cause by wearing something pink.

“People should be more aware about breast cancer…because it’s a big thing here in our community,” Robinson said.

Tribal athletes from Big Cypress, Brighton, Hollywood, Immokalee and Trail, as well as Natives from other Tribes throughout Indian Country, made up the 17 teams that competed in the tournament. 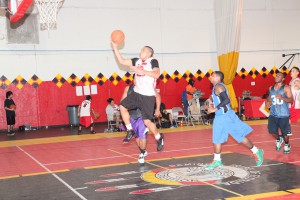 The men’s championship game between Outkast and Take Over was decided in the first half. Tournament MVP Ronnie Battle, of the Comanche Tribe in Oklahoma, scored 36 of his tournament-high 40 points in the first half.

Battle set the tone early in the title game when, with 13:19 left in the first half, he made a 3-pointer from the arc to put Outkast up 5-0 over Take Over.

Outkast began the game with an 8-0 run before Take Over made its own scoring run, led by a 3-pointer from Big Cypress Tribal athlete Greg Carter, who scored 13 points in the title game. The 3-pointer cut Outkast’s lead to 8-3 with 12:39 left in the first frame.

After Outkast missed out on a shot opportunity, Take Over’s Adrian Mata scored his only basket, a 2-pointer, on a layup, which cut Outkast’s lead to 8-5 with 11:38 left.

Take Over would get no closer than that the rest of the way, as Outkast used a 15-2 run to expand their lead to 23-7 with 6:44 left in the first half.

In one of the most exciting plays of the men’s title game, Outkast’s Solomon HorseChief, of the Pawnee Tribe in Oklahoma, threw a long assist from halfcourt to Battle as he converted on an alley-oop layup.

“We came out here to win,” said Battle, who made six 3-pointers in the title game. “When we come into championship games, we don’t want to be playing around.”

The 30-point mercy rule came into play as Outkast finished off Take Over at the second half’s 8:59 mark. Outkast outscored Take Over 19-13 with about six minutes of playing time in the second frame.

“Everybody on our team contributed on defense,” said HorseChief, who scored 9 points in the title game. “That’s how we got it done.”

Outkast avenged its only loss of the tournament, a 50-48 defeat by Take Over, in the first men’s semifinal game.

With Take Over moving on to the title game, Outkast went to the loser’s bracket to play VSOP in the other semifinal game.

Outkast took advantage of its second chance, outlasting VSOP 41-38 to advance to the final.
Outkast’s journey to the championship began with a 58-52 win over the Immokalee Chiefs and a close 70-68 win over B-Town before their semifinal loss to Take Over.

Meanwhile, Take Over’s ride to the title game started with a 60-29 win over VSOP, followed by a 54-43 win over Big Cypress Men and the semifinal win over Outkast.

Early on, however, it seemed as if B-Town would be one of the teams to make a run to the title game.
Led by Brighton Tribal athlete Trewston Pierce, B-Town defeated Fearless 52-50 before losing two consecutive games: 70-68 to Outkast and 36-32 to VSOP. 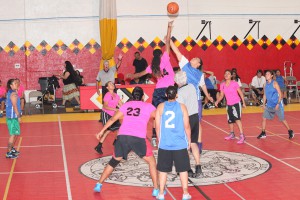 You Don’t Want It’s Pearl Kelewood, of the Navajo/Apache Tribe from New Mexico, scored 7 of her 10 points in the first half.

Kelewood’s two easy layups and two early free throws gave You Don’t Want It an 8-1 lead over Lady Ballers with 6:09 left in the first half.

“We decided to play man-to-man coverage and switch it up a little bit,” said Kelewood, the women’s tournament MVP.

You Don’t Want It, who suffered a 29-28 double-overtime loss to Lady Ballers in the first women’s semifinal, abandoned the zone defense and stuck to what worked for them in the first half, as they finished the title game on a 9-5 scoring run.

“We lost to them once already, so we really needed to use our speed and size advantage this time around,” Kelewood said.

You Don’t Want It’s run to the women’s championship began with a 41-11 win over Team Hollywood, splitting two games with New Year’s Basketball Tournament champion Lady Ballers.
Meanwhile, Lady Ballers defeated the Hollywood Seminoles 35-31 before the split with You Don’t Want It.

Legends footnotes
To participate in a Legends game, players had to be at least 35 years old.

The Rebels won the men’s Legends tournament, as they defeated runner-up Still Got It in their preliminary game and in the final.

The women’s Legends tournament was decided on a technicality: the Big Cypress All-Stars was considered the champion since Jus Playin’ didn’t field enough players in time to compete.