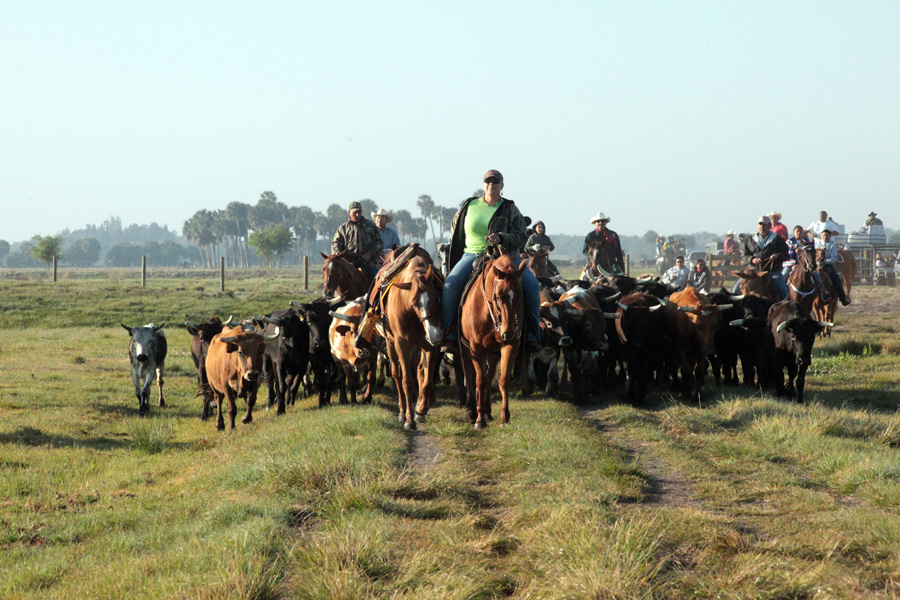 BRIGHTON — Members of the Brighton community paid tribute to their friend Roger Smith at a cattle drive held in his memory on March 16.

Led by his riderless horse Goldie, Smith’s boots backward in the stirrups, about 100 people participated in the Roger Smith Memorial Cattle Drive to move a herd of cattle through his four pastures into a field near the rodeo arena.

“He was loved by many and had a big influence on a lot of people,” said Diane Smith, Roger Smith’s widow. “We want to plan another one for next year to honor all the Smith men. They were all cattlemen.”

The Smith men included the late patriarch Jack, his sons Jack Jr. and the late Roger, Fred and Richard Smith. Roger Smith passed away on March 13, 2012, at age 58.

The atmosphere during the 4-mile drive was respectful. People on horseback, in four-wheelers and swamp buggies quietly drove the herd of about 50 roping cattle. With the riders mostly silent, the cows didn’t moo, the dogs didn’t bark and there was nary a whinny from the horses. Louvella Yates expertly guided Goldie.

“I always called Roger my uncle,” said Yates, a family friend. “He invited me to the first cattle drive I ever went to. After he died, I asked the family if they would have a cattle drive for him. Since I thought of it, they wanted me to guide his horse.”

Brighton Board Rep. Larry Howard followed the herd in a swamp buggy.

“He was a true Native American cowboy,” Rep. Howard said. “He took real pride in his cattle. He was always working in his pastures tacking fences, cleaning up and pulling up pond apples. It was his way of life and it was our way of life before casinos.”

After the cattle drive, friends and family shared memories of Smith during lunch in the Brighton Gym. Smith, a leader in the community and the Tribe, served as a Brighton councilman for two terms and as a Board representative for one. But most people remembered him as a good friend.

“I grew up with Roger and I remember the fun times we had,” Weems Buck said. “We grew up around the Red Barn and used to play there all the time. During high school, we used to hitchhike home from football practice in Moore Haven.”

Smith’s legacy lives on in the hearts of his friends.

“He was a good man,” said friend David Snow. “He loved his family and his cattle and was an all-around good guy.”

People lined up to speak about Smith, some choking back tears.

“He was a hard-working man, he loved his family and he accomplished a lot in his life,” Hollywood Councilman Marcellus W. Osceola Jr. said of his father-in-law. “He was always on the move and loved to meet people. He’ll be remembered not for what we did here today, but because of what he did when he was alive.”

Smith had the respect of other cattlemen in the Tribe.

“Roger learned from his dad and had the same work ethic,” said Natural Resource director Alex Johns. “He went to his pastures once, twice, sometimes three times a day. He was voted cattleman of the year three times in Brighton. He had the best herd he could and was the first to step up and offer steer to the 4-H kids. I’m proud to have known him; he was a big part of my life. I looked up to him and am proud to follow in his footsteps.”

“He was very proud to be a Seminole Indian cowboy,” Norman ‘Skeeter’ Bowers said. “Growing up, that was also in my heart, which is why I was drawn to him. I was very close to Roger and I feel like the Brighton community is my second family.”

Smith and former President Richard Bowers were among the first Native Americans to ring the opening bell on Wall Street during the annual meeting of the Native American Finance Officers Association in 2007.

“It was historic and had never been done by Indian Tribes,” Bowers said. “I was honored to have done it with him. As long as we have this cattle drive, we will always remember Roger.”

Many people connected deeply to Smith in many ways, and over generations.

“Our youngest played softball together,” said former Chairman Mitchell Cypress. “In time, he got into politics and got a lot of things accomplished. He’d smile all the time – even if you said something wrong he’d still smile. Fred, Richard, Jack and Roger were the brothers of Brighton and were involved in what needed to be done in Brighton. They were a family to look up to.”

After sharing poignant memories of Smith, all paid their respects to his wife, Diane, and daughters Dana Osceola, Trisha Osceola, Amanda Julian and Brittany Smith. The scene was filled with hugs and tears.