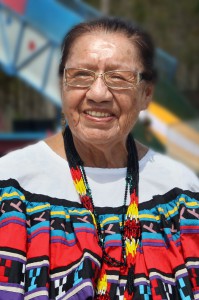 TRAIL — The Seminoles are a matriarchal society in which their blood line and clan are descended through the women of the Tribe. This high matriarch position is earned through many years of shouldering responsibility and serving the best interests of her descendants and clan members through hard work, self-sacrifice and adherence to cultural teachings.

Frances Osceola is one of these women who have truly earned the title of matriarch. She was blessed by the Creator with the unique qualities that define a good teacher, and she strived to learn and understand her heritage. By observing and practicing the traditions and artistic talents of her people, she has become an important link in the chain of knowledge that maintains order in the system.

“It is important to begin teaching our children and grandchildren at an early age to have pride in where they come from and their responsibility to keep this knowledge alive,” she said. “We can’t just study our history in a book; we need to practice our traditions and make them a part of the daily lives of our children and their children.”

Frances was born on Oct. 25, 1936, in an Everglades camp approximately 20 miles from where she lives today along the Tamiami Trail near the Collier/Dade County line. One of 13 children born to her mother, Alice Huff Billieboy, she is the granddaughter of Sam Huff and a member of the Panther Clan.

She grew up in a period of dramatic change for the Seminoles and lived a traditional lifestyle under the influence of several notable Tribal icons. Her grandfather Sam Huff was one of her mentors and a member of the Big Town Clan. He was born in the early 1870s in what was then a part of the Everglades at Pine Island, close to the current Hollywood Reservation. His parents, followers of the revered spiritual leader Sam Jones, fought extradition to the Indian Territory in Oklahoma by withdrawing deep into the Everglades following the Third Seminole War.

By the time Frances was born, the Tamiami Trail and drainage projects in the Everglades were beginning to have a direct impact upon the Seminole lifestyle. Sam Huff warned everyone the projects would steal the water and destroy the Everglades. Living in his camp in Collier County, Frances remembers traveling by dugout canoe to Smallwood’s Trading Post in Chokoloskee and following her family as they worked to earn a living.

As the economy changed with the encroachment of development, her family moved to Brighton. At 10 years old, she learned to read and write at the Reservation Day School. They recognized education would be a valuable tool and by the time she was 12, they allowed her to attend boarding school in North Carolina.

“I learned a lot in school but I was homesick. When I was about 15, I came back to live in the camp of Annie Mae Tommie at Dania,” Frances said. “She was my great-grandmother’s sister and taught me how to sew and make dolls, baskets and beadwork. I learned how to make palmetto baskets, but I didn’t like doing them. It takes too long to gather the material and get it ready to use. She taught me the skills that helped me support my family for more than 40 years.”

Frances related how living in the Tommie Camp gave her access to work in the fields picking tomatoes, cucumbers and peppers. The money she made on the farms supplemented her income from the sale of items to the tourists.

She found a partner for life in William McKinley Osceola Jr., known to everyone as “Wild Bill.” They went to live at his father’s camp along the Tamiami Trail east of Miami and began a family that would include four girls and two boys.

Sharing the same lifestyle, goals and ambitions, they became an indomitable team and were able to purchase a small abandoned campsite in eastern Collier County along the Trail. Raising their children with both education and traditional values, they built a strong family unit that is continuing to pass their knowledge on to their 14 grandchildren and many great-grandchildren.

“Wild Bill built all of this for her, and her camp is home to the entire family,” said Frances’ cousin Judy Baker. “It is hard to find anyone today that remains as close to their culture. Her children and grandchildren all dress traditional, know how to cook over the fire and are being taught the skills of their ancestors and the knowledge of their heritage.”

Frances’ daughters Debbie and Victoria smiled as they talked about growing up in the camp and the gift shop their mother operated for more than 40 years. Although Frances still sews and does beadwork, she closed the shop a few years ago to devote her attention to caring for Wild Bill when his diabetes became debilitating. Since his passing, she focuses her energies on her grandchildren and great-grandchildren and offers them the wisdom of her years.

“Grandma has always expressed the importance of tradition, education and being self-responsible,” Wynter Dawn Billie said. “She has given us pride and purpose. Our ancestors had their permanent camps but sometimes had to set up temporary ones to follow the hunting and growing seasons or seek work in the tourist trade. We are no different. No matter how far we have to go to do our jobs and educate our children, we all consider this camp our permanent home. My main house is here, but I must keep a small place in town near the schools and office. This is where our hearts are, and this is where we really live in Frances Osceola’s Camp.”