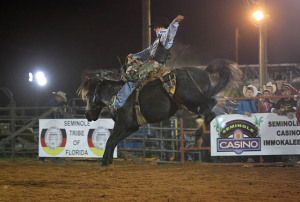 About 2,650 people attended the event.

“We had a great turnout, the biggest I’ve seen on this reservation in years,” Big Cypress Councilman Mondo Tiger said. “The cowboys were very respectful and appreciative … It was a win for the Tribe and the community.”

The rodeo helped raise funds for the Immokalee Volunteer Firefighters Association. The city of Immokalee fire department staffs full-time paid firefighters but relies on volunteers to augment shifts. The Seminole Tribe depends on the city to provide emergency services on the Immokalee Reservation.

“There are more heavy hitters in the PRCA events,” said Billie, of Brighton Reservation. “The tougher the competition, the better.”

Anderson wants to double the turnout next year and hopes the rodeo will be a continuing relationship between the fire department and the Tribe.

He said he heard positive comments from contestants and attendees during the event.

“Some Tribal members commented that there were more people in the stands than they’ve ever seen at that arena,” he said. “It wasn’t just good for the fire department; it was a positive thing for the Tribe and the arena.”

Entertainment at intermission included a rodeo clown and crowd-pleasing capuchin monkeys, who rode dogs while herding sheep into a pen. Country music stars Phil Vassar and Love and Theft rounded out the entertainment performing their chart-topping singles during a concert after the rodeo.

The three-event Seminole Tribe PRCA Rodeo Pro Series also included rodeos in Lakeland on Jan. 16-17 and in Wauchula on Jan. 23-24. The series was produced by Mason Pro Rodeo Productions. Owner Leroy Mason said the Immokalee rodeo was a hit.

“We got very positive feedback, but there were people who didn’t realize it was going to be a professional rodeo,” Mason said. “It was a great success as an investment in future rodeos in Immokalee.”