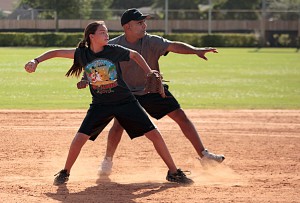 The end of summer doesn’t portend the end of baseball season in Seminole country. With weekly baseball clinics by Press On Sports and DeMatties Baseball, the season continues year-round.

To measure the progress of players, coach Richard Gonzalez, of Press On Sports, hands out incentive awards every few months. Immokalee players received their awards in the beginning of August, while players in Big Cypress, Brighton and Hollywood will get theirs soon. Gonzalez believes it’s important for kids to learn a variety of sports.

“We want them to know baseball is an option,” said Gonzalez, who played ball at Manhattan College in New York and has coached baseball for more than 20 years. “We train whoever comes and wants to learn, at any age. It’s not all drill and skill; we always play a game.”

The incentive awards are based on effort, progress, attitude, participation and performance.

“We want kids to get an understanding of baseball,” said assistant coach Alex Zapata. “We try to show them you can have fun at more things than basketball. Baseball is a mental sport – it works your brain.”

It also works muscles and reflexes, as a few Hollywood kids demonstrated at practice in August. They worked on drills to improve eye-hand skills, throwing accuracy and batting proficiency.

“I come out here to play because I’m good at it,” said Sarah Descheene, 13, who plays on the softball team at Nativity School in Hollywood.

Baseball clinics are held every week from 5 to 8 p.m. on Mondays in Hollywood and Big Cypress; Tuesdays in Immokalee; and Thursday in Brighton.

The clinics focus on fielding, hitting, pitching and game strategies.

For more information about the clinics, contact your reservation’s Recreation Department.