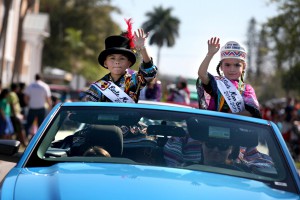 MOORE HAVEN — Only in Moore Haven, during the tiny town’s biggest event of the year, do residents of all races color the landscape in Seminole patchwork clothing.

“Lottie Huff, from Brighton Reservation, made this for me,” said former Moore Haven High School principal and football coach Karl Engel, showing off a jacket fashioned by Huff to commemorate his years of coaching and teaching local children, including many who became Tribal leaders.

“My great -grandfather was the second judge to serve Glades County. My mother was born right here,” she said as her family cheered on a cavalcade of marching bands and floats from the front yard of the family home. “Community events like this are critical. It explains who we are and helps us look to the future.”

And only in Moore Haven did residents greet each other all day long with “Happy Chalo Nitka.”

Chalo Nitka, which means “Big Bass” in Creek, began in 1949 to celebrate the asphalt paving of the narrow roadway. Then, like now, the parade led to an open field where Seminoles showcased doll and basket making, wood carving, traditional foods and alligator wrestling.

Lewis Gopher, of Brighton Reservation, who served on the organizing committee, said Seminoles have always been a part of the festival where non-Natives are more than welcome to sport Native garb. In fact, folks who dressed the part were admitted free.

“This is a community really into the Seminole history and culture, and they want to participate as much as they can. It feels good that they are interested in who we are,” Gopher said.

As far back as Lorene Gopher can remember, Seminole families popped in on the yearly event. Her grandfather, Billy Bowlegs, would draw crowds when he demonstrated his turkey calling techniques. For many years, bass caught during a fishing tournament held earlier in the week were displayed for everyone to see. At the end of the day, organizers insisted that the Seminole families take the bass home to eat.

“The town people looked out for us when we didn’t have anything,” she said.

The tables turned about six years ago following a few years of little Seminole participation.

Tracy Whirls, executive director of the Glades County Economic Development Council, said the Tribe stepped in as a Chalo Nitka leading sponsor after the local chamber of commerce, which used to host the event, folded unexpectedly in the midst of the global recession.

“We literally did not know if the festival would happen that year,” Whirls said. “I can’t say how delighted we were when the Tribe came back. We had two months to pull it together. The Tribe helped resurrect what Chalo Nitka was.”

The day of cultural sharing included a menu of gastro-delights including Indian tacos and hamburgers, catfish and garfish, funnel cakes and frybread. Cloggers danced to American roots music. Seminole members competed in clothing contests. And, in keeping with tradition, brothers James and Clinton Holt displayed alligator and snapping turtle talents to a captive audience.