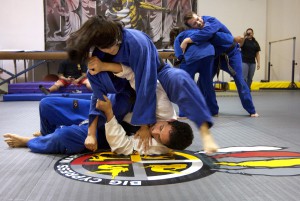 “There is always that time, the initial moment when the child makes contact and feels it,” said Luis Gutierrez, lead instructor at the Big Cypress Mixed Martial Arts school.

But usually it’s bruised ego, not flesh, that draws one-time tears in the program, which launched four years ago with youth from Big Cypress, Brighton, Immokalee and Hollywood at Gutierrez’s Pembroke Pines gym.

Now, the Bell siblings, of the Hollywood Reservation, are passing on their discipline, knowledge and athleticism as mentors, role models and training partners to newer students at the school now based at the Fitness Dome in Big Cypress.

“Getting the (Junior) Black Belt is not the end – it’s the beginning,” said Dawna Bell, the children’s mother. “With hard work and dedication, all of our children will be Black Belts. It’s good for the Tribe to have children grow up to be strong adults.”

The school is open to all Tribal members ages 5 to 18. General classes for mixed martial art fundamentals and fitness are Tuesday and Thursday nights. Youth interested in becoming Black Belts can earn a spot in the program’s Black Belt Club, which meets every Monday night for more rigorous training.

“Those are the candidates who are serious, whether they do it later for fitness or competition fighting,” Gutierrez said.

The Bell children, having already endured years of training and six hours of grueling testing for Black Belt ranking, will continue in the club but will also help instructors train their younger peers.

“Basically, we’re just learning to defend ourselves. If anyone tries to bully us, we know what to do,” Adrianne said. “We want little kids to look up to us.”

In early December, after two decades of owning his own martial arts gym, Gutierrez, who is a Brazilian Jiu-Jitsu Black Belt, sold the business to Tribal member Charlie Osceola. Osceola’s daughter Charlie Osceola, 8, was among a battery of Green, Brown and Blue Belts who showed to mix it up on a recent Monday night in the Black Belt Club.

“Essentially, kids develop self-awareness. They train against other kids, but they learn to take care of themselves. They are not afraid to interact in society,” father Charlie Osceola said. “It’s like the old adage, ‘They know how to fight so they don’t need to.’”

Children wrestled, flipped and sparred with each other. Five of the youngest students were awarded with steps up in belt rank. They played wrestling tag games, laughing and shrieking with every tumble and twist. There was no crying.

“That’s where the fun is. We play lots of games before we get to fighting,” Gutierrez said. “It’s aggressive but not violence. We coach through the tears.”