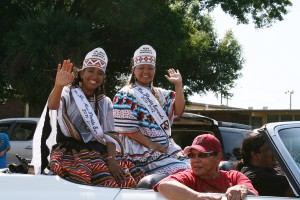 MOORE HAVEN — One of Florida’s oldest continuous festivals kicked off on March 2-3 in Moore Haven.

Chalo Nitka, Creek for “Big Bass,” is sponsored in part by the Seminole Tribe of Florida and gives the Tribe an opportunity to showcase their culture and traditions to the outside community.

The festival originated in 1948 to celebrate the paving of Main Street in Moore Haven.

On March 3, residents and visitors lined the streets downtown to watch the parade before heading into the park.

“We want to become nationally known,” Miss Florida Seminole Princess Jewel Buck said. “Our Tribe is dying out, and we want to get our Seminole history and tradition and everything about the Seminole Tribe out there so we may one day become nationally well known.”

Under chickees in the park, Glades County residents and visitors watched Tribal members demonstrate how to sew patchwork and do beadwork.

“Eat our amazing food,” Junior Miss Florida Seminole Princess Jaryaca Baker told the crowd. “We have pumpkin bread and Indian tacos, so go and fill yourself up and have a good time.”

Later in the day, attendees listened to Tribal storyteller Gordon “Ollie” Wareham tell stories and legends. Afterward, professional venomous snake handler David Weathers performed his thrilling snake show and got a 13-foot cobra to stare him straight in the eyes. Audience members were on the edge of their seats for the Tribe’s main event, alligator wrestling.

Two generations showed off alligator wrestling techniques side by side. James Holt performed several handling tricks, including sticking his hand in the mouth of a 10-foot alligator. Alongside, Tribal youth Eecho Billie performed similar tricks, such as bulldogging. Billie’s gator was smaller and had its mouth taped for safety.

To wrap up the Seminole portion of the festival, the Tribe put on a fashion show featuring traditional Seminole clothing dating back to the 1800s.

In appreciation for the Tribe’s involvement in the festival, the event offered anyone wearing a traditional Tribal shirt free admission.

“It’s beautiful to look at the colors and designs. Someone’s mom or grandma made that. Every outfit you see out here is one of a kind; there’s not a double made.”

Nunez enjoyed the variety of guests at the festival as well.

Tom Boyd, who grew up in Moore Haven, remembers the festival’s beginnings as a fishing tournament.

At the end of the day, the fishermen would line up their catches, and the Seminole Indians would help the judges determine the largest fish.

“Well, ever since I was a little boy, that’s what Chalo Nitka was when the Seminole Indians came to town,” Boyd said.

“We white men were rednecks, and, for the Indians to come to town, we were impressed. It was very interesting to watch them.”

“I think they offer a tremendous amount of heritage that was lacking,” Boyd said. “I would say the Seminoles are making an impact. They are great contributors to the economy, and I really admire them.”