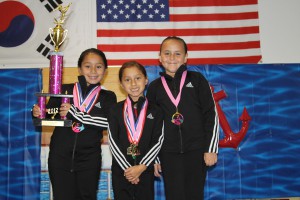 COOPER CITY — Three Tribal girls catapulted their way onto the award podium on Feb. 11, after shining in the 2012 Cruise Classic gymnastics competition.

Jaylee Cypress, Harmony Cypress and Valholly Frank competed as level 2 gymnasts, showing off their skills on the vault, bars, beam and floor. To prepare for the competition, the girls trained two days a week at Park Avenue-Weston gym.

“She’s great,” said Janie Valdez, Jaylee’s mother. “We think she needs to stick with it because she’s a natural. She loves competitions.”

Harmony and Valholly also achieved success. They competed in the senior division of the competition.

Her all-around score of 34.25 earned her 10th place at the competition.

With an all-around score of 35.325, Harmony placed ninth overall.

“They are learning and progressing,” said Big Cypress Board Rep. Joe Frank, Valholly’s father. “It’s important for all kids to be doing something to keep them healthy and improve their fitness.”

The Cruise Classic gymnastics meet was held at Park Avenue Gymnastics in Cooper City. Six gymnastics organizations from around Florida participated. Jaylee, Harmony, Valholly and their other level 2 teammates from Park Avenue-Weston placed second in the team competition.

All three girls hope to advance to level 3 for their next competitive season.