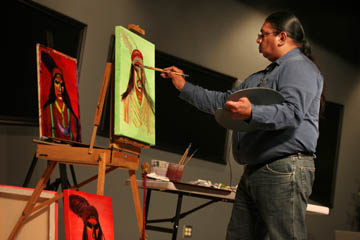 Easels held canvases: two filled with images of Seminole warriors, one blank save for a thin layer of chartreuse and bright green strokes. A table was decked with tubes of paint, water glasses and paint brushes that stood in a tall jar like arrows at the ready. Two empty chairs and three microphones waited.

“This is very much experimental,” said Mollie Doctrow, curator at the college’s Museum of Florida Art & Culture. “What we are about to see is a mixed-media, theatrical presentation that combines music, vocals and fine art.”

Called “Elgin Jumper’s Theatre Studio Experience,” the show figuratively painted life in the Everglades and the struggles of one modern-day Native American through candid and emotional poetry performance.

To lilting background vocals by Brittney Brady and acoustic, electric and bowed string accompaniment by Philip Huebeck, Jumper followed his recitations with the rise and fall of his paintbrush at first peaceful, then conflicted, then at peace again.

At the climax of the show, Jumper’s poetic quarrel was punctuated by musical dissonance via Brady’s purposeful off-key soprano that clashed with Huebeck’s intentionally dreadful-sounding bow dragged across banjo strings.

“Nine millimeter still smoking and a rose in a vase … I was only good at being no good,” Jumper recited. “It’s so hard to come back from that.”

Eventually, when the stormy discourse of words and music cleared and the musical complement turned playfully light, Jumper had produced another, perhaps stronger, warrior portrait. At the end, many in the audience of nearly 30 art lovers and SFSC students gave enthusiastic reviews.

“Time flew by in a very enjoyable, lovely, artful way,” said Linda Williams, of Lake Placid, who attended with her husband, Michael Williams.

Art professor Cathy Futral sat for the performance with about 10 students who were assigned to watch and then write a critique on the show for a grade. Futral said she related to the show.

“Power and energy transmitted through the painting. I had my mouth open. I really connected to the artists’ passion,” Futral said.

Doctrow said the event complemented an exhibit that runs through May 1 at the college’s museum, “At Home: Seminole Reservations and Contemporary Native Art – Elgin Jumper and Jessica Osceola.” A special chickee made by Norman “Skeeter” Bowers; paintings by Guy LaBree and Christopher Sill; items from the Ah-Tah-Thi-Ki Museum; and artifacts from the private collection of Anne and Charles Reynolds supplement the show.

Jumper, of the Otter Clan, shared with spectators that he felt compelled to create art about 10 years ago when he found himself at a personal crossroad. By way of intense study, his first series of paintings was inspired by art masters.

The show at SFSC was a result of Jumper’s art evolution, he said. He produced a similar performance with assistance from Brady and Huebeck for a show with other Seminole artists in January 2014 at Florida Gulf Coast University.

“I just felt like I needed to do something different, something that incorporated theater and music. I needed to take art to another place,” Jumper said.

After viewing the show, Doctrow understood.

“The result was very, very special. I felt like I was on a journey, too,” Doctrow said.