Johns is first Native American to lead the organization

ORLANDO — A new chapter has been added to the Seminole Tribe’s storied history in the cattle industry. Tribal member Alex Johns was named president of the Florida Cattlemen’s Association at its annual convention June 21 in Orlando.

Johns is the first Native American to lead the nearly 5,000-member organization.

“My family can trace its roots to 1541 when the cattle came to Florida,” Johns, of the Brighton Reservation, said in his address to the convention. “Cattle and horses have always been a way of life for me. Cows always made sure we had money and food on the table. I’ve always been searching for a way to give back to the magical animal who gave so much to me.”

During his one year term of office, Johns, who also serves as the Tribe’s natural resources director, plans to promote the Florida cattle industry to create public awareness. The slogan is “Show Your Passion” and he wants every member of the FCA to embrace it.

“I know we are all humble and want to keep our heads in the woods, but the new social media is where millennials get their news,” he said. “We as an industry have to get there as well. I want you to post the stuff you do every day at #showyourpassion. Tag me. This is the most efficient way to promote our industry.”

The announcement got the attention of the estimated 2,000 conventioneers and with enthusiastic applause, they welcomed their new president.

“It is a privilege for someone of Alex’s caliber to represent the Tribe as the president of the FCA,” said Howard, Brighton Board Rep. “For him to have that input in the state on behalf of the Tribe, we couldn’t have anyone better.”

“This is an exciting time for the Tribe,” added Frank, Big Cypress Rep. “This will open the way for other Tribal members to go out for other state leadership positions. It’s a good example for our youth.”

The Florida cattle industry began in the 1500s when Spanish explorers brought the animals across the Atlantic. Native Americans’ involvement can be traced to 1740s and the Seminole leader Cowkeeper’s massive herds in northern Florida. By 1775, the Seminoles worked 7,000 to 10,000 head on Paynes Prairie near Gainesville and were cattle keepers until the Seminole Wars and Civil War decimated the Tribe and its herds.

It wasn’t until the 1930s, after the Tribe was living on reservations, that cattle were introduced again in the form of about 400 malnourished animals. With time, the Tribe’s cattle operation grew and by the 1990s it had become an industry leader. Today the Tribe’s program is one of the top in the nation.

In his role as natural resources director, Johns has overseen and guided the Tribe’s cattle program. In 2013 he urged the board to purchase Salacoa Valley Farms in Fairmount, Georgia, a successful seed stock operation. Johns knew that superior genetics would lead to a better beef product and he believes the Salacoa purchase has improved the quality of Seminole Beef produced by the Tribal herd.

For more than a dozen years, Johns has served in various leadership positions in the FCA. The nonprofit organization’s membership, comprised of cattle producers and affiliates statewide, represents 900,000 to a million cows in the state and accounts for about $700 million in calf sales annually.

The process of taking the FCA helm began for Johns with committee, county and district leadership positions. The path to the presidency was a six year process in which he served as secretary, treasurer, second vice president, first vice president and president elect. The process ensures the work that is started, which often takes years to be completed, is understood by everyone in leadership roles.

“Alex may be a once in a lifetime president,” said outgoing president Ken Griner. “He has the history and heritage of the Seminole Tribe, which is the history of the entire cattle industry. Alex is so engaged in our industry there is no conversation he isn’t fully engaged in. He brings a set of skills that’s hard to duplicate. There are just no holes in his knowledge.”

According to its website, the FCA is “devoted entirely and exclusively to promoting and protecting the ability of cattlemen members to produce and market their products.” To meet that goal, the organization’s leaders represent the membership to lawmakers in Tallahassee and Washington D.C. FCA is a grassroots and inclusive organization.

“On a federal level, most folks can’t go to D.C. to lobby for the farm bill or any other legislative issue that would affect the small producer,” said President Elect Matt Pearce. “The association represents them. We lobby for less regulation and for conservation.”

Griner believes one of the biggest challenges facing Johns as president will be time management. Since Florida is such a large state, making all the FCA meetings and going to Tallahassee and D.C. to address legislative issues is time consuming.

“It’s a lot of windshield time,” he said.

Prior to the banquet, at which he would take over the responsibilities of president, Johns socialized with FCA members at the President’s Reception. Although he claimed to be a bit nervous about the evening, he confidently greeted other cattlemen and cattlewomen in the crowded room.

“It’s been a long time coming and it’s finally here,” Johns said. “I’m looking forward to it. I’ve got a good team, young leaders who are coming up [in the organization] and there are a lot of people I can call on.”

Outside of the reception, a few long-time FCA members sat comfortably together. All were impressed with Johns and were looking forward to having him lead the organization.

“I don’t remember when I wasn’t a member [of FCA],” said Gillie Russell, 76, of Highlands County. “He [Johns] is very well thought of.”

“He’s an exceptional young man and has a lot of ability,” added Billy Kempler, 72, of Brevard County.

Johns plans to continue to work on issues the FCA has been addressing already, one of which is animal disease traceability. Since the FCA members produce food, the leadership believes they have a responsibility for it. If a problem arises, traceability will keep the problem local and make it easier to fix, rather than having to shut down the entire industry.

Public grazing is another important issue for the FCA, whose members help the state manage the land and make it productive through land leases. Many ranchers lease land since it can be difficult to own the vast amount necessary to raise cattle.

“Leasing is a win win situation,” Griner said. “We provide a service to the state to reduce fire risk. If you aren’t keeping the land burned or mowed or chopped, you’re ripe for a fire. Active management, whether its state or private enterprise, reduces management costs, keeps the state more green and helps the cattle industry.”

The banquet featured awards, acknowledgements and guest speaker Red Steagall, who entertained the crowd with a litany of stories and original songs.

Pearce believes it’s fitting that a member of the Tribe, as one of the first in the state to have cattle, will lead the FCA.

“Alex is very detail oriented, thinks things through, sees the bigger picture and has always surrounded himself with people who can get things done,” Pearce said. “We are excited for Alex to be our leader; he brings a lot to the table.”

Griner said the best part of the job when he served as president was interacting with members, seeing parts of the state he normally wouldn’t have had time for, being exposed to different ways of doing things and different opinions. He has no doubt that Johns will rise to the task.

“He’s an extremely talented, knowledgeable person, he’s got everything,” Griner said. “He’s young, intelligent and articulate; he’s got it all. We look forward to having Alex as our president, he’s a special guy.” 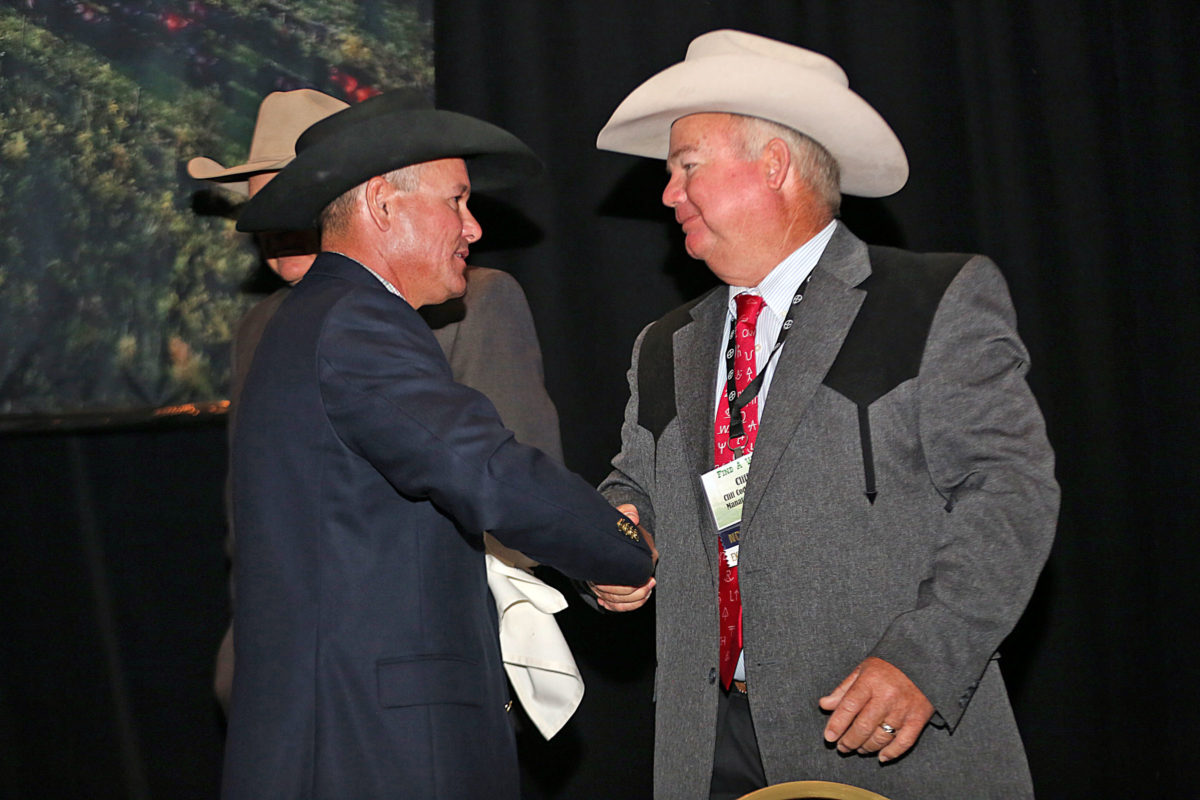 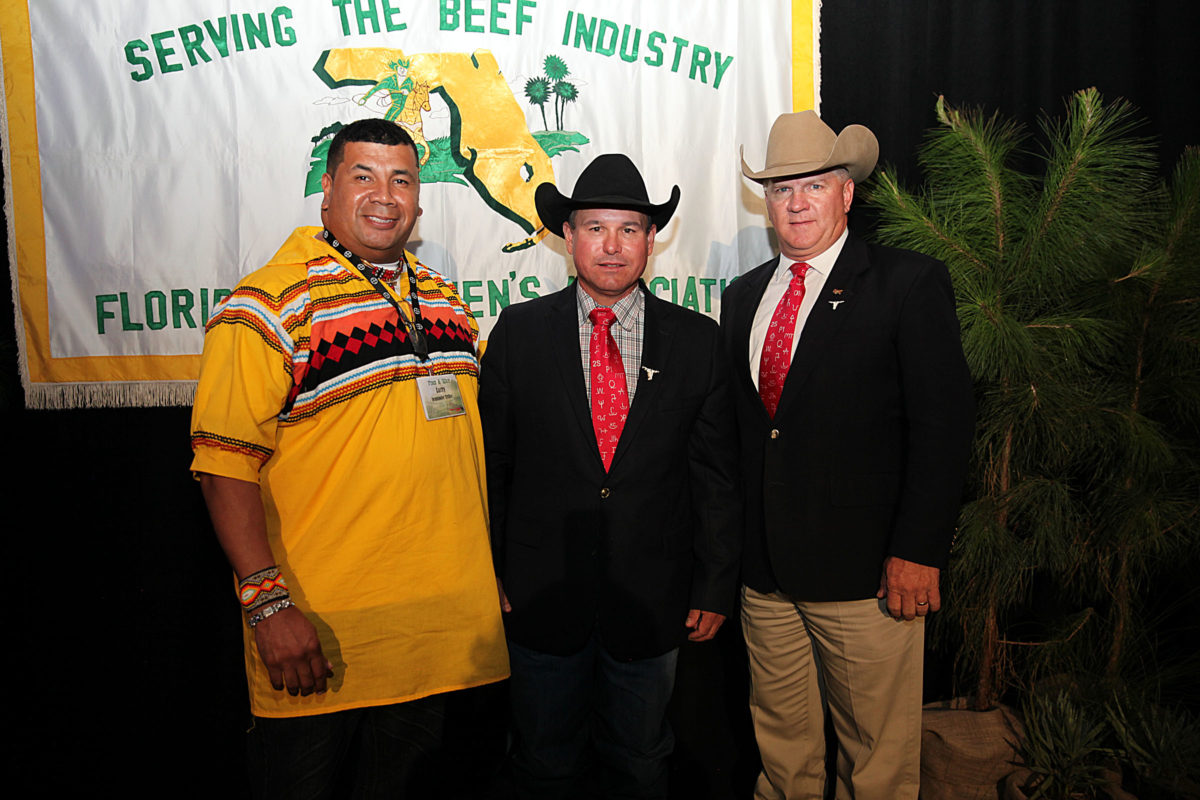 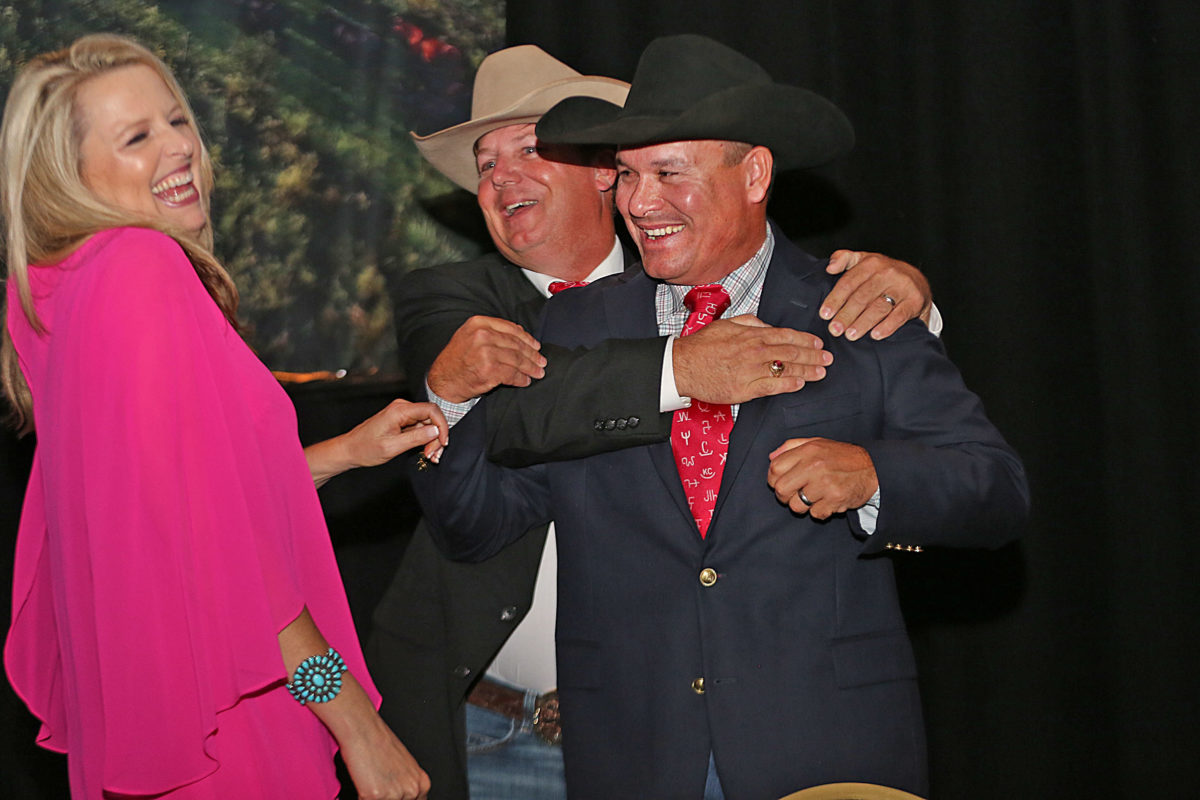 Alex Johns gets a congratulatory hug from the newly elected secretary of FCA Pat Durden to the delight of his wife Liz after the FCA speeches concluded. (Beverly Bidney photo) 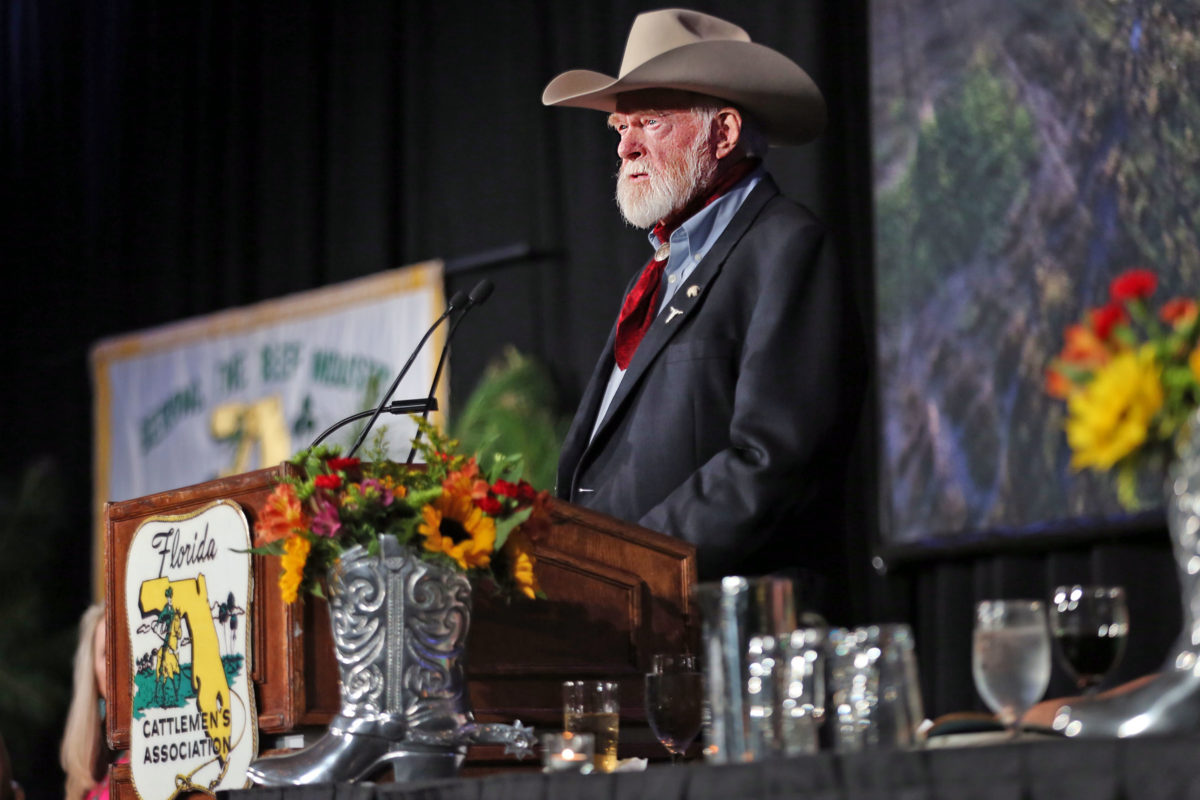 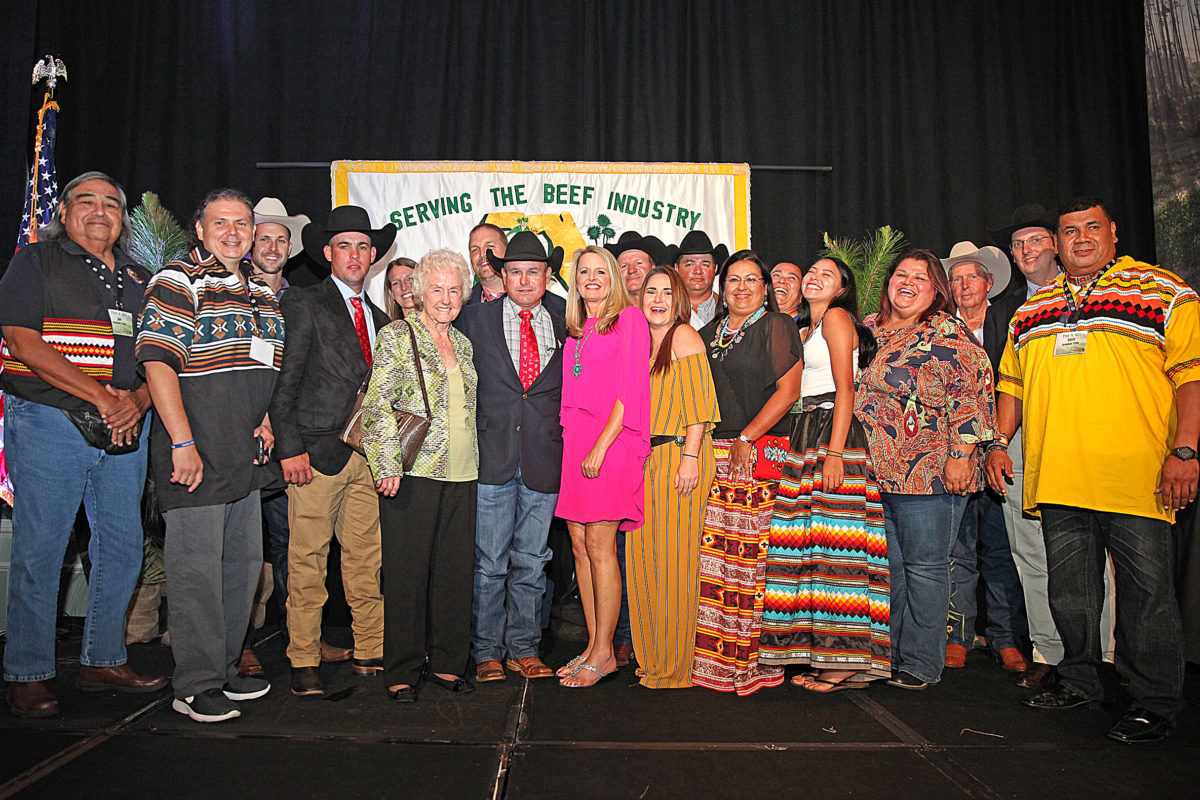 Tribal members, staff and members of the Brighton community pose with Alex Johns, the newly named president of the FCA. (Beverly Bidney photo) 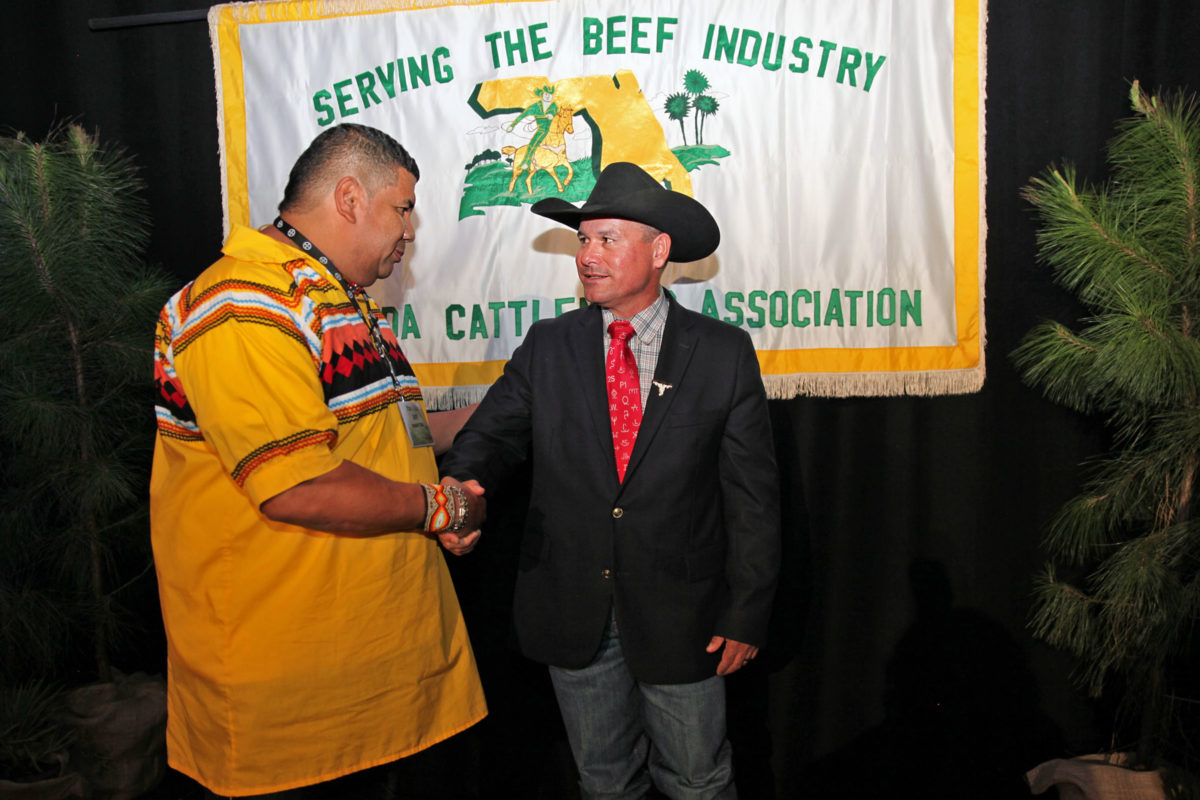 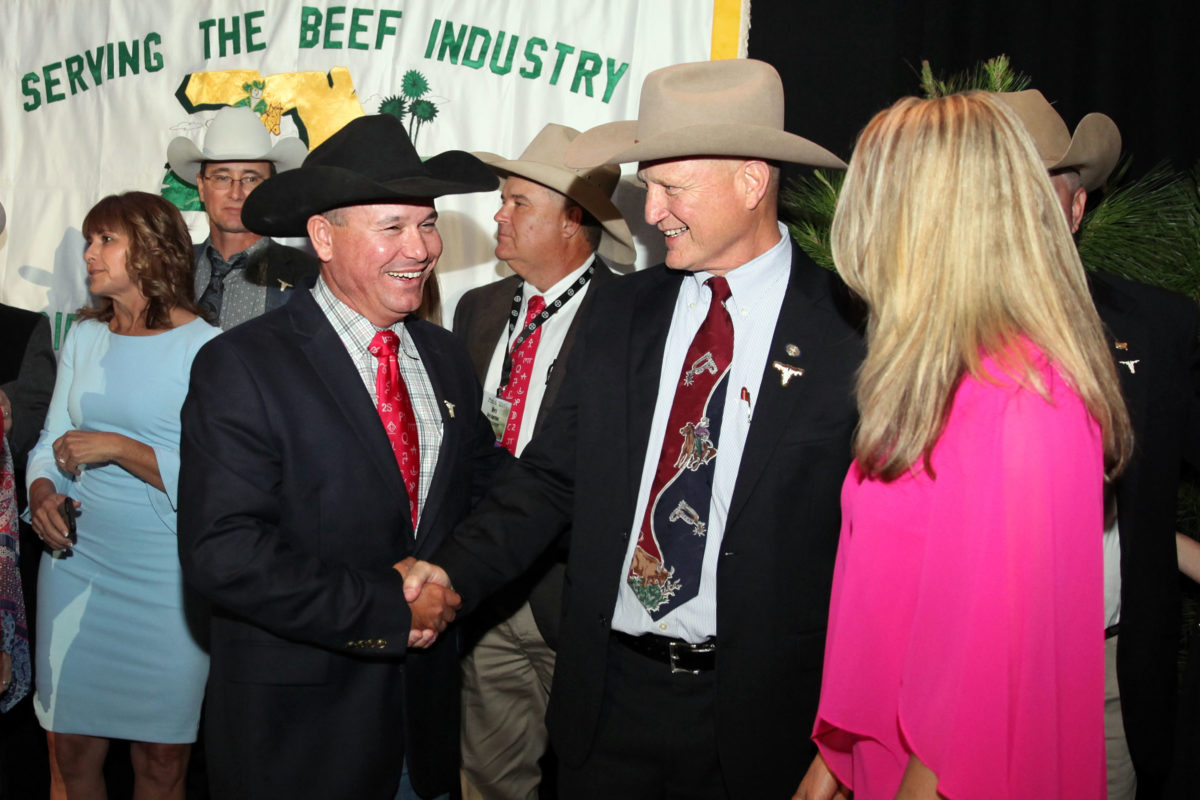 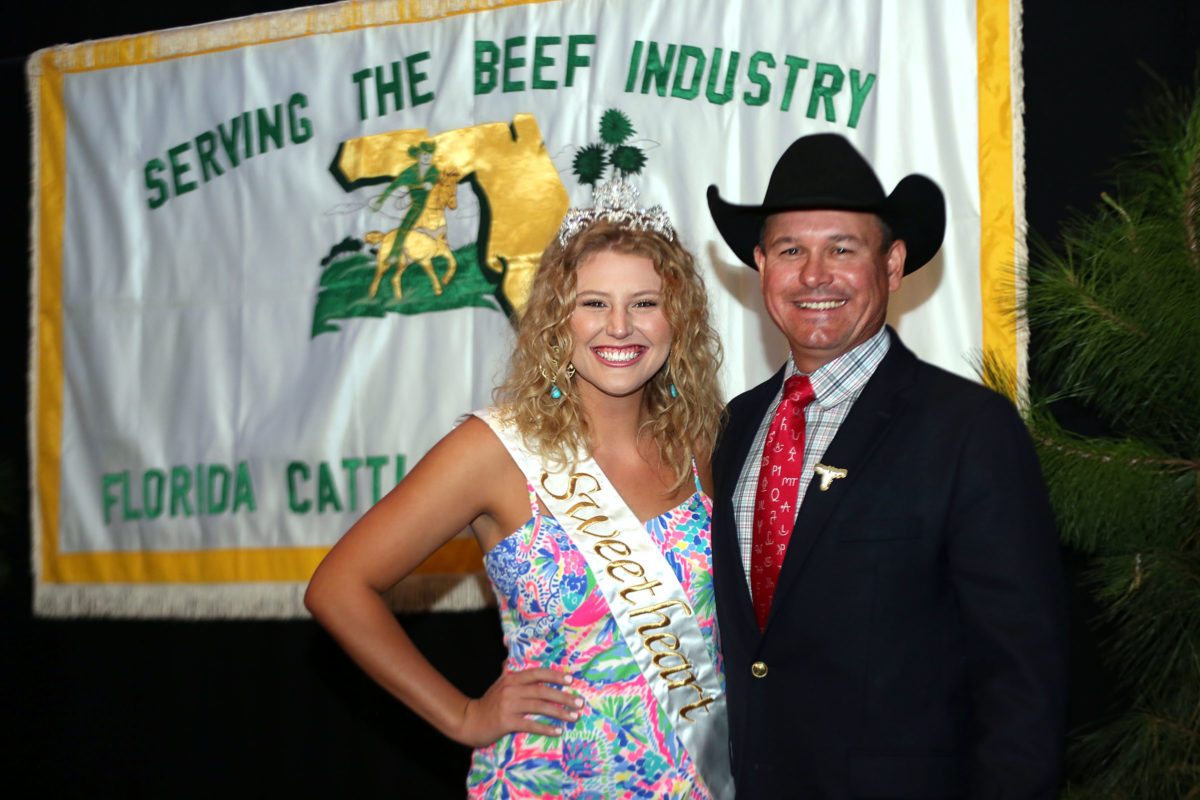 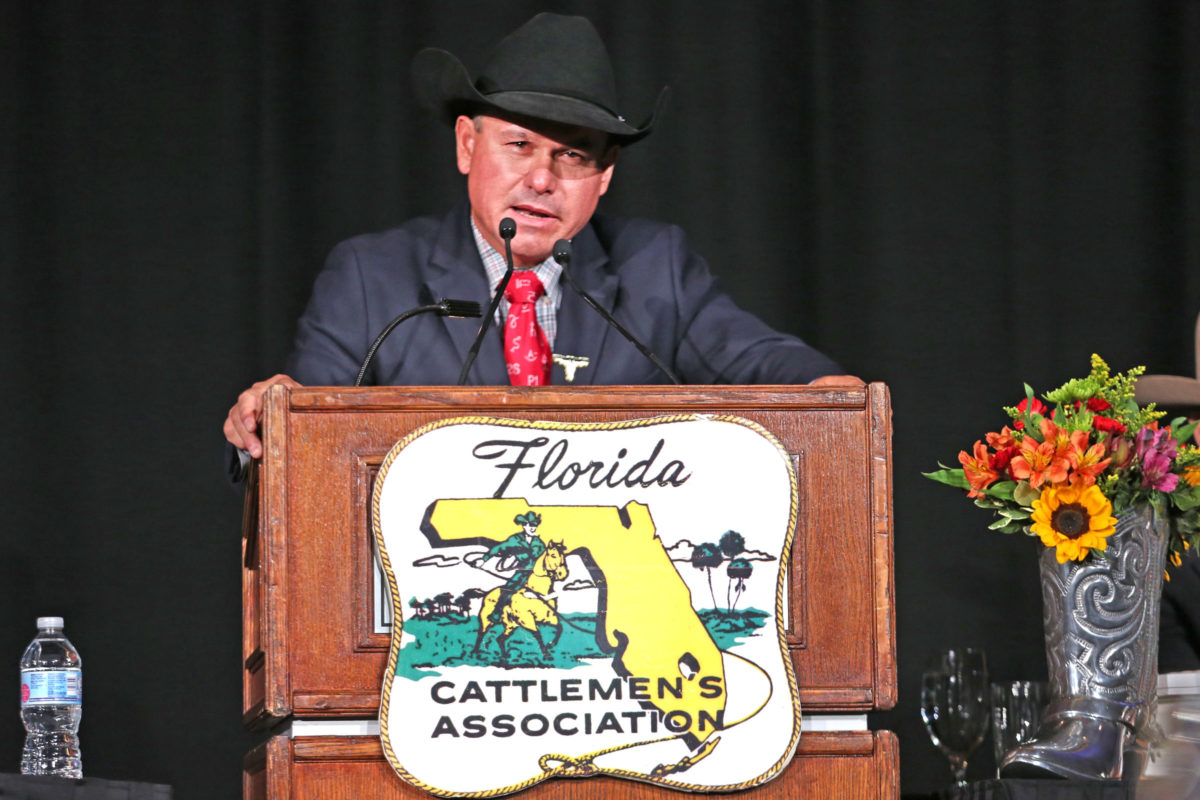 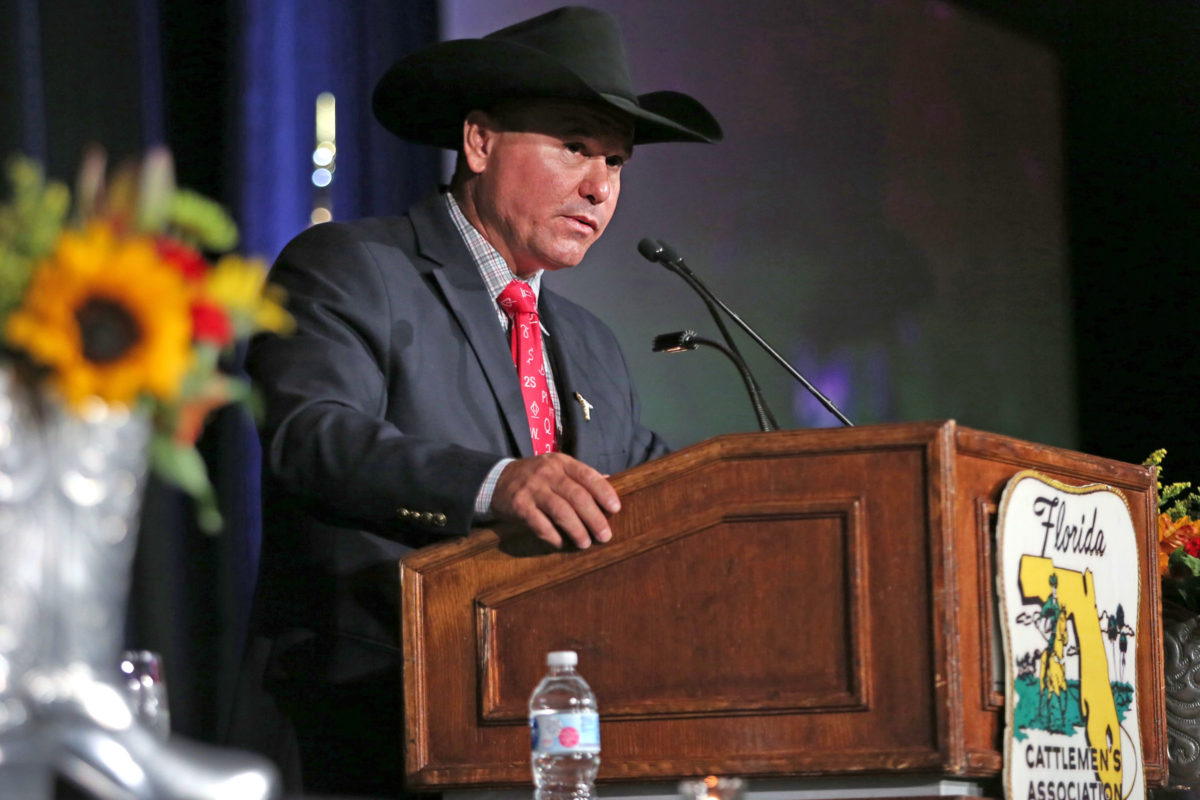 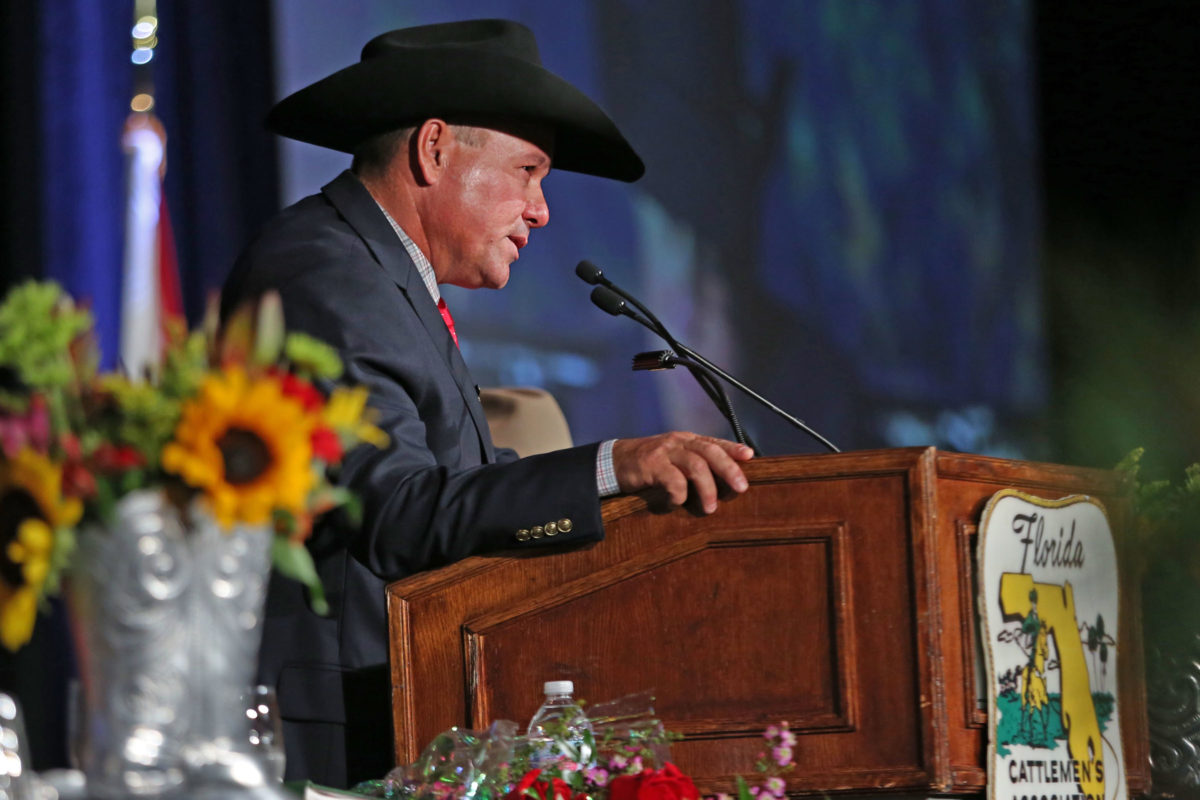 Alex Johns addresses the Florida Cattlemen’s Association as president for the first time at its annual convention and banquet June 21 in Orlando. He is the first Native American to lead the nearly 5,000- member organization. (Beverly Bidney photo) 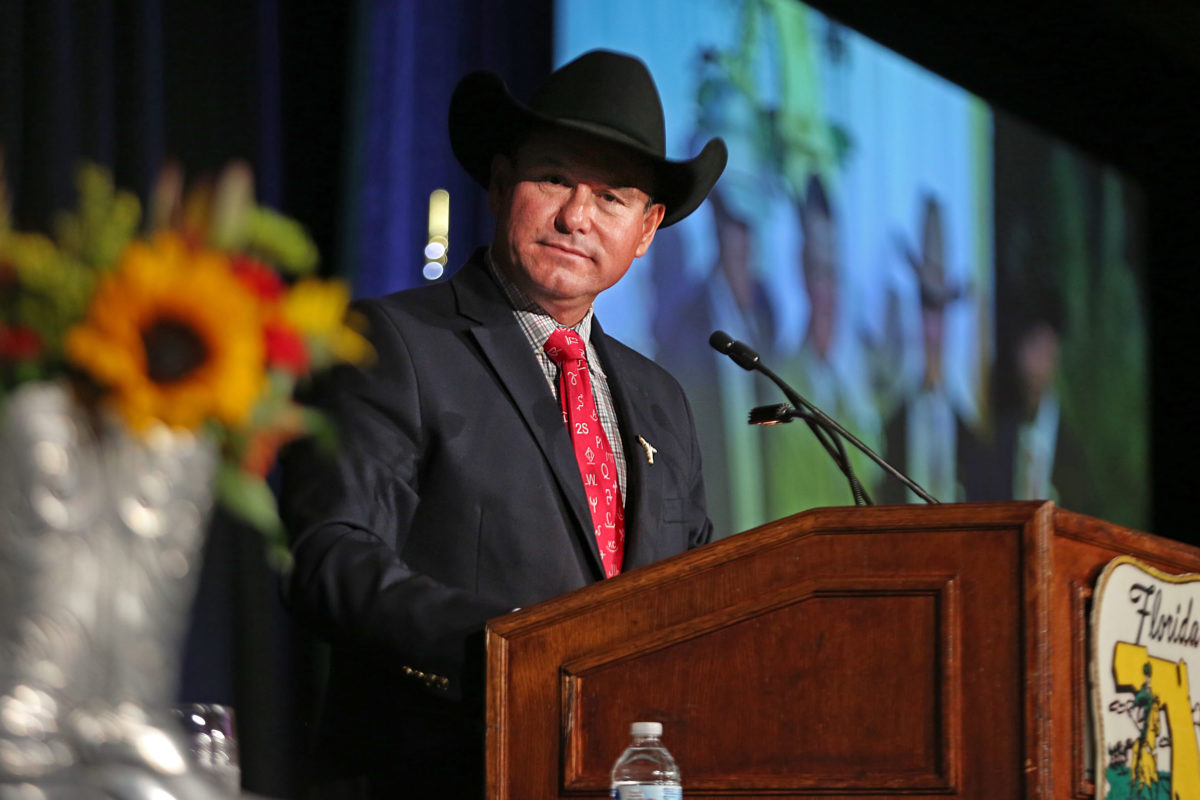 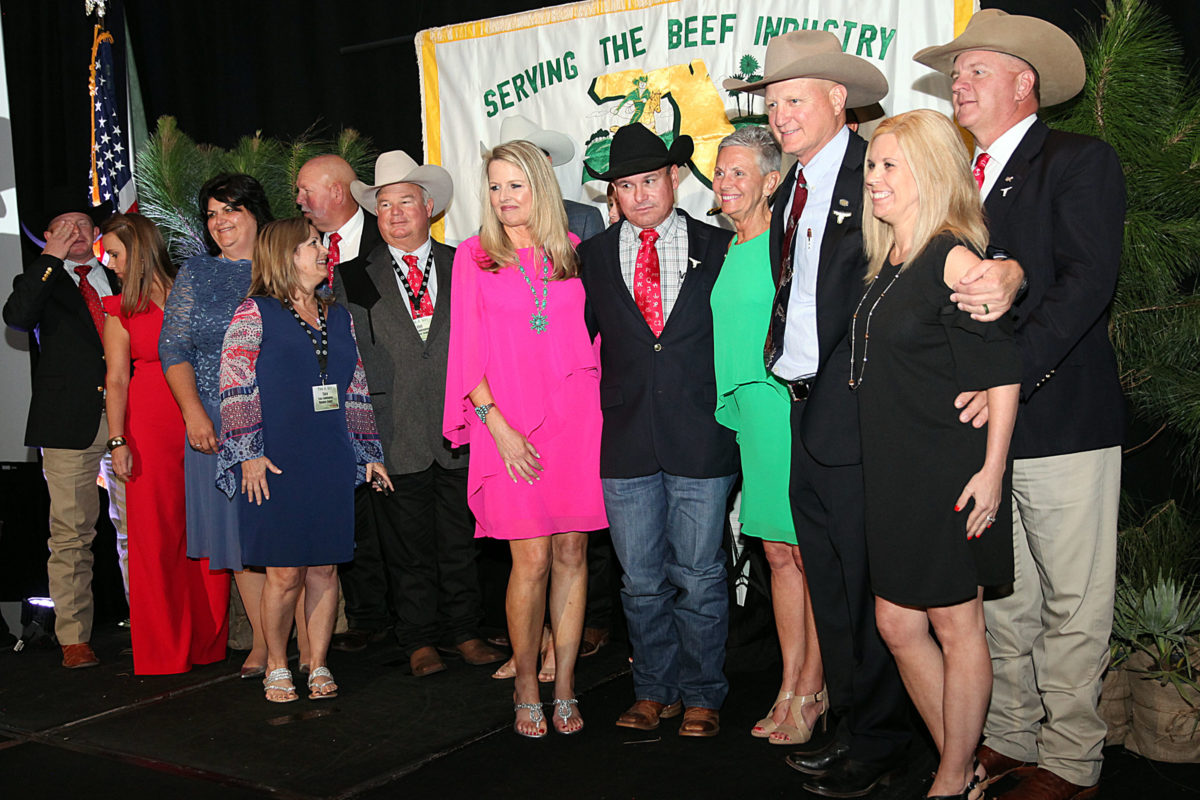 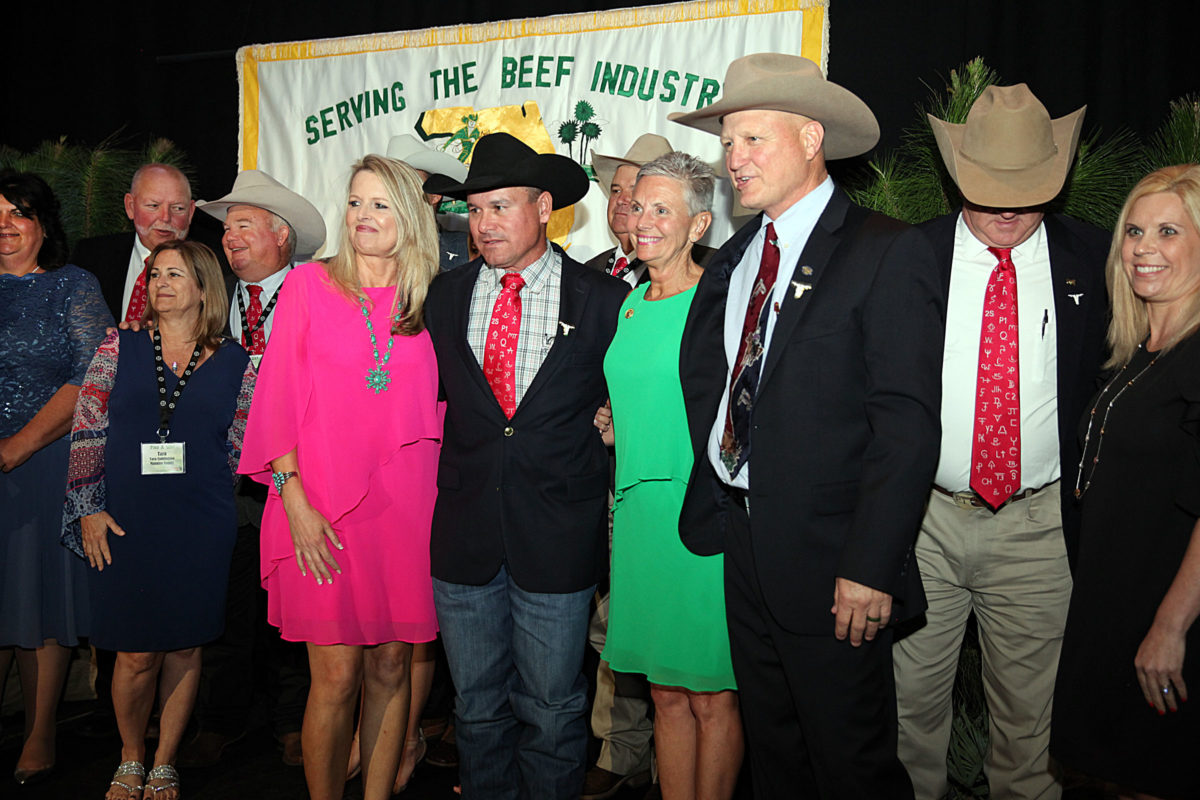 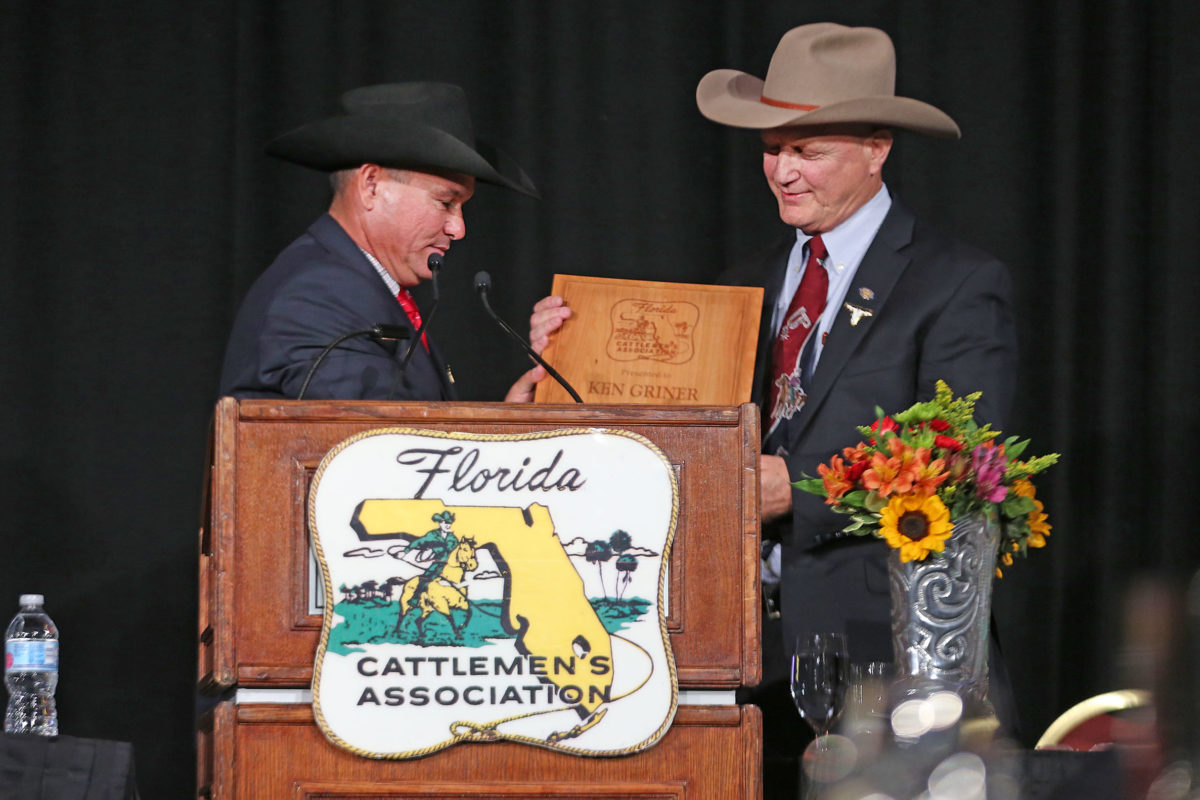 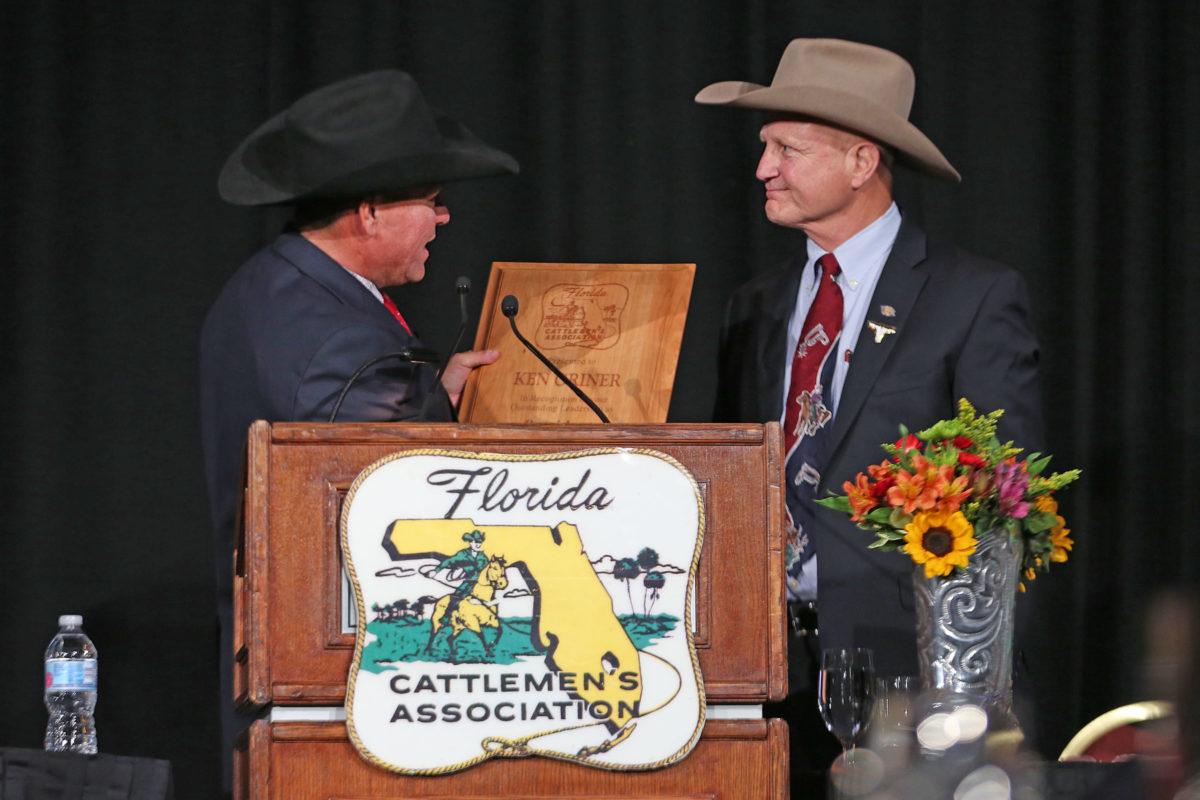 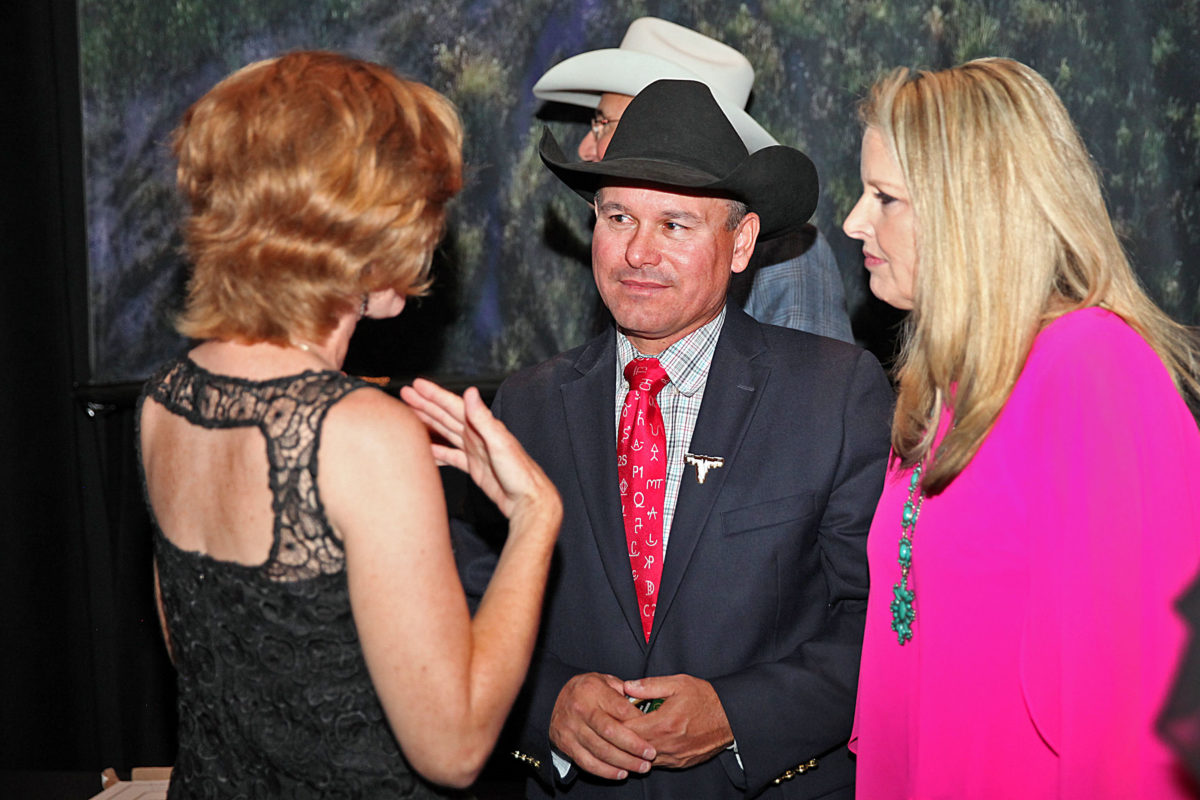