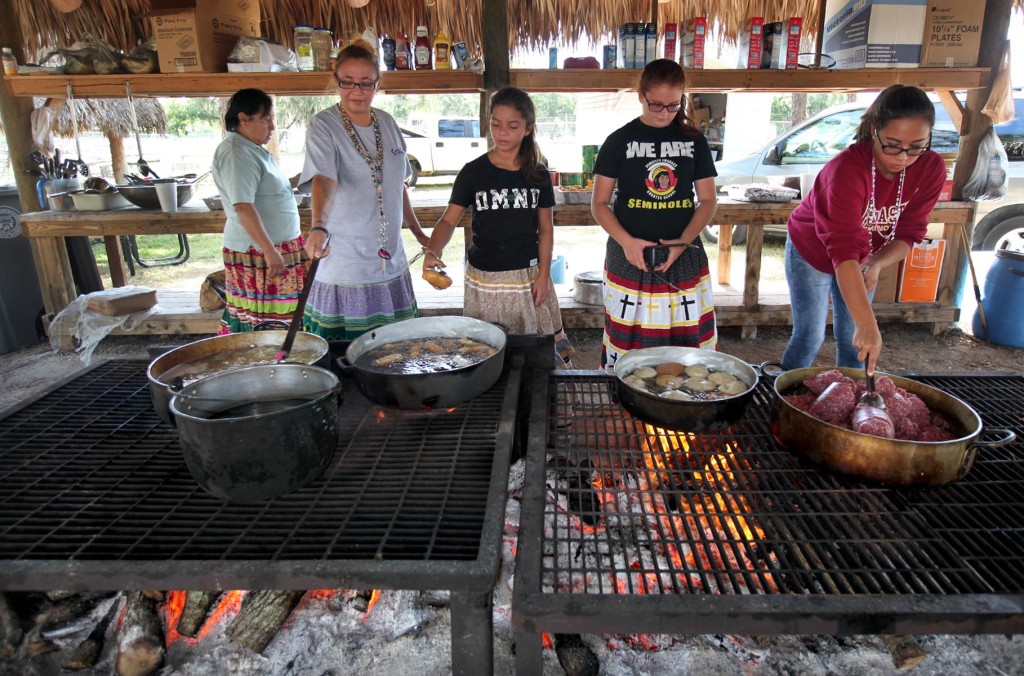 “It feels like you are really taking part in something bigger than you,” said eighth-grader Conner Thomas.

That’s when being PECS Seminole gets real and speaking Muscogee Creek, the language of the ancestors, is the only way to communicate.

Divided into groups, children in grades kindergarten through eight participated in outdoor experiences that summoned the past on three separate days in May. During age-appropriate activities, they prepared foods gleaned from earth and beast, cooked over an open fire, carved tools and listened to timeless legends that for generations taught the lessons of life.

Games like cornhole, watermelon roll and skillet toss provided plenty of laughter and more chances to practice the Native language.

For cooking, the youngest children focused on simple tasks like kneading flour for frybread then tossing it into boiling pots of oil. The middle grades made frybread, but they also performed ancillary cooking tasks like feeding the fire after choosing just the right wood, slicing scores of vegetables and fruits, and carving whole chickens using sharp blades.

In 2014, Creek was adopted as a foreign language course of study by the Florida Department of Education and is accepted at all Florida colleges.

Students in grades seven and eight completed similar activities but at higher levels. For example, they slaughtered, butchered and cooked a whole pig, which included fried crackling.

Some eighth-graders, such as Alyke Baker, Aidan Tommie and Conner, further participated by presenting younger students with traditional stories.

Alyke’s lesson explained why no tigers live in Florida. Aidan used a tale about twin brothers to teach the origins of thunder and lightning, which further reinforced why children should shelter during a storm in the safety of a chickee. Conner warned the children to “never provoke an owl.”

Mollie Jolly, a cultural language instructor with Brighton Culture, said the eighth-graders’ presentations showed that they had learned well to retell the legends, and she encouraged the younger ones to pay attention because one day it would be their turn to pass along the legends.

Tribal elder Alice Sweat said all the camp experiences were geared to give children hands-on exposure to traditional ways.

“A lot of our children are not growing up under the chickees where we ate, slept and cooked. We’re trying to get them to understand that life was once very hard,” Sweat said. “By learning, they know how to survive.”

Sweat, who has served the Tribe in many capacities through recent decades, took over the role of the school’s traditional language and history program director upon the passing last year of Brighton’s leading cultural program and Creek language advocate Lorene Gopher.

Sweat said PECS students learn literally from the ground up about Seminole life, so they can choose later how to carry on the traditions and culture.

For Conner, who has attended every PECS Culture Camp since first grade, graduating this year from PECS means this camp was his last – maybe.

He hopes to return when he is an adult to help keep the traditions alive.

“When I was a little kid, the camp was about running around and having fun. Now, it’s about responsibility and leadership,” Conner said. “It’s still fun, but it’s serious fun. It reminds me of who I am every day.”