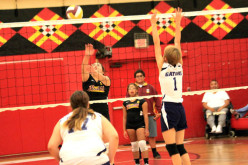 BRIGHTON — The coach’s backflip was nearly perfect in the eyes of her players.

Jackson’s acrobatic maneuver debuted a few years ago and has become a pep rally tradition thanks to the players.

“Now they’re like every year, ‘Do the backflip,’” said Jackson, who was a gymnast and volleyball player in her youth.

The annual flip isn’t the only thing earning high marks this season for the PECS volleyball team.

Despite losing key players from last year’s squad – which won all its games except one – the Lady Seminoles haven’t missed a beat. They entered the final full week of September with a 3-0 record, which included a three-set thriller against Yearling Middle School, the only team that beat PECS a year ago.

“There’s quite a bit of talent that we lost, but the girls that we brought up (from last year’s ‘B’ team) have been picking up their game a lot from last year,” Jackson said.

This season there is a little less leg room on the bench because all 12 players who tried out for the team made it. In the past, the team usually had nine players and a ‘B’ team. Jackson said the ‘B’ team wasn’t formed this season because of a lack of opponents. With a dozen players, finding ample playing time poses a challenge. In some matches, one group of players plays one set and then another group plays the next set.

“I try to give everyone a chance to play,” Jackson said.

Experience comes from the foursome of eighth-graders: Aleina, Krysta Burton, Raeley Matthews and Cady Osceola. Aleina, a setter, often sets the stage for kills by co-captain Raeley. Through three games, Raeley had a team-high 15 kills.

“(Raeley) has very good timing, so she’s able to adjust to sets that other students might not be able to hit,” Jackson said. “She can adjust to them and hit them very hard. She’s very consistent about getting the ball in. She doesn’t hit it out very often.”

The eighth-graders made sure their team started the season on a triumphant note Sept. 3. In a 2-0 win against Moore Haven, Aleina delivered seven aces and two kills; Krysta had three aces and one kill; Cady notched two kills; and Raeley registered three kills. PECS also received solid serving from seventh-grader Alaina Sweat, who had 10 aces.

Eight days later, a balanced attack propelled the Lady Seminoles past Everglades City, 2-0 (25-13, 25-9). PECS was led by Raeley with three kills and Julia Smith, who delivered five of the team’s 12 aces.

The teams were knotted 7-7 in the first set before pinpoint serving from Krysta and pivotal kills from Raeley helped PECS pull away.

Two aces from Cady put PECS ahead 18-9 and forced Everglades City to call a timeout. When play resumed, Raeley kept momentum on the Lady Seminoles’ side with a kill. After Everglades City briefly cut into the deficit, Raeley delivered the match’s most powerful kill to give PECS a commanding 21-12 lead.

An ace from Jacee Jumper and another kill from Raeley closed out the opener.

PECS concluded the evening in style. Three consecutive aces from Julia provided a 16-6 lead. Three of the team’s final four points came via an ace from Alaina, a kill from Janessa Nunez and an ace from Aubrey Pearce. That final point delivered by Aubrey evoked a jubilant reaction from the Lady Seminoles, who swarmed the seventh-grader in a display of team camaraderie.

“She’s been really struggling in practice getting her serves over. When she got it over, it was pretty exciting for all of them,” Jackson said.

PECS passed its toughest test Sept. 17 with a 2-1 win against Yearling in Okeechobee.

The teams split the first two sets. PECS won the opener 25-11 and Yearling captured the second set, 26-24, to force a winner-take-all third set. The Lady Seminoles responded with a 15-8 win as they upped their record to 3-0.

After the season opener, Jackson said there was room for improvement. The players listened and responded with better performances. Aleina said the team has become stronger by “getting our serves in and knowing our defense.”

The first two weeks of October will be busy for the Lady Seminoles, who play their final six games in a span of 14 days. Eight-graders will be honored at the team’s final home match Oct. 13.