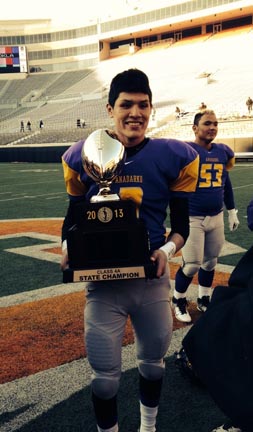 ANADARKO, Okla. — As a freshman at Anadarko High School in Oklahoma, Curtis Osceola, 15, already has a football state championship under his belt and he’s only aiming higher. Osceola and the Anadarko Warriors won 40-0 against Poteau High School Dec. 14 in the Class 4A Oklahoma state championship, the school’s second state title in three years.

“It felt good to play on that field,” Osceola said. “I guess you could say it’s a blessing that we won. We worked hard all year and it finally paid off.”

Osceola is a wide receiver and outside linebacker on the junior varsity team, and he plays on varsity’s special teams. He played in the last quarter of the championship game.

As hard as Osceola works on the field, he said he always puts school first. He hopes to receive a football scholarship to a Division 1 school when he graduates; University of Oklahoma and Florida State University are his prospects. Only a freshman, he is still uncertain about his career goals but knows he wants to be involved in physical education.

Osceola comes from a large family of athletes. His brother, Jarrid Smith, played football at Florida Atlantic University; his sister Kaitlynn Osceola plays basketball for Broward College; and another sister Cara Osceola attends Anadarko with him and plays basketball as well.

Osceola lives in Oklahoma with his mother, Tera Tartsah, but he comes to Hollywood whenever possible to visit his father, who he is named after.

“Watching him play makes me feel good real deep down in my heart,” Curtis Osceola Sr. said. “It’s a blessing from God.”

Osceola has played football since childhood, and although he plays other sports throughout the year to stay in shape, he calls football “his sport.”

Osceola stays connected to his heritage through his school, which is located in the self-titled “Indian Capital of the Nation” because of Anadarko’s large population of Native Americans. The school has a full-time Indian Education director and staff.

With three more years of high school football, Osceola has high hopes for the future and simple advice.

“Hard work pays off,” he said.