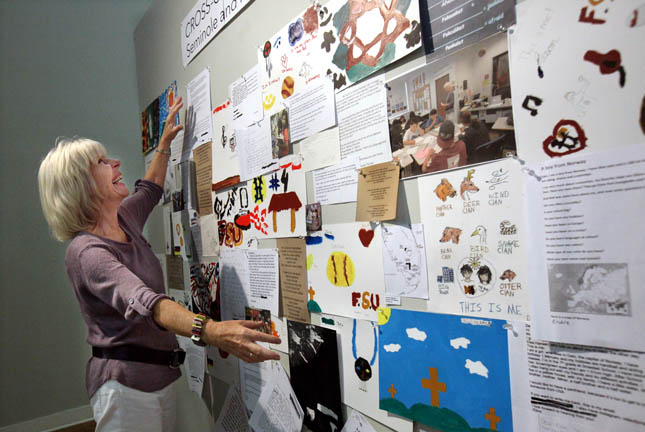 WEST PALM BEACH — Crayon drawings of chickees and crosses, baseballs and bobcats meshed with children’s musings for a wallboard collage at the Armory Art Center in West Palm Beach.

“It is a cross-cultural exchange. I visited and the children painted for me, but I was only a courier,” Hansen said.

Hansen’s project with PECS came at the end of several fortunate happenings.

A snowbird who lives part-time in Naples, Hansen’s first encounter with a Native American came during a five-day painting marathon in 2010 at the Naples Philharmonic Center with renowned realist and New York Studio School of Drawing, Painting and Sculpture dean Graham Nickson.

Hansen recalled that the man, who identified himself as Rob Roy, was an art model with very long black hair and a distinct way of speaking.

“I was curious. I wondered if his manner was cultural or about the language somehow and then I wondered if Native American people ever become part of the American dream,” Hansen said.

Her interest led to a mission to study and paint life in the Everglades, which shortly became learning all she could about the history and culture of the Seminole Tribe. She visited Ah-Tah-Thi-Ki Museum, attended cultural events open to the public, painted in the Grassy Waters Preserve and read books about the Tribe, including “A Seminole Legend” by Betty Mae Jumper and Patsy West.

“Betty Mae Jumper wrote that if the trees could speak they would tell about her great-grandmother … the Second Seminole War and how all the men were out hunting and the women and the children were captured,” Hansen said. “The water, the trees, the people – it is a story about survival, courage and love.”

In an elongated, multi-image piece composed of 18 Seminole photos, the Red Barn and Seminole War re-enactments evolved into school and community scenes. The photos included Seminole royalty, soccer, stickball, cooking and archery. Underneath the images, Hansen offers miniature paintings like mirages of the photos.

“I can see the culture in the new generations. And I can see how activities of war have joyfully become about sport and competition,” Hansen said.

The children’s wall was innocent and carefree.

And it took very little time for Hansen to learn that principal Greseth is of Norwegian descent.

“So, the world is small, after all,” Hansen said.