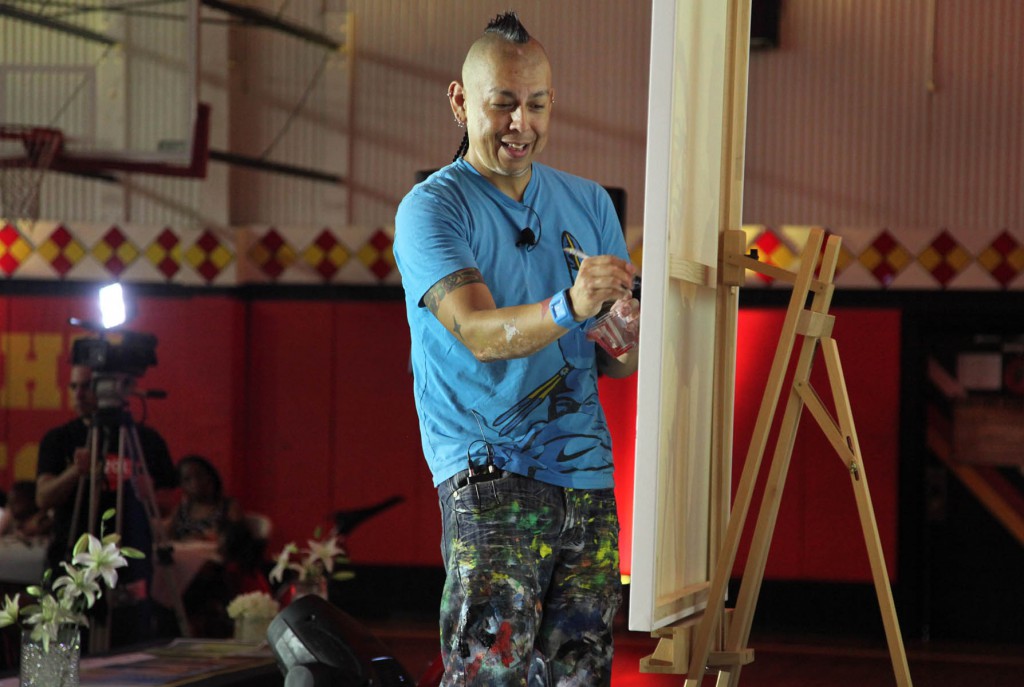 By Elizabeth Osceola and Royce Osceola

HOLLYWOOD — Through a visual art performance, Native celebrity Bunky Echo-Hawk painted his version of a “Modern Day Warrior” for future generations of the Seminole Tribe.

Echo-Hawk, a designer for Nike’s Native N7 clothing line, travels the country to give motivational speeches and paint live for his audiences. On July 25, he brought his talents to the Hollywood Gym to perform for all Tribal members. He engaged the crowd by asking them, “What does it mean to be a Seminole?” and incorporated their responses into his painting.

“We have a voice as Indians,” he said. “It’s our job as Natives to celebrate our culture and put it out there and be proud of it.”

Echo-Hawk’s interest in art began at the age of 3. His father introduced him to drawing by doodling comics while reading the Sunday paper. This sparked Echo-Hawk’s love for the arts. He eventually went on to receive a formal education at the Institute of American Indian Arts.

Through his work, Echo-Hawk conveys messages ranging from environmental and political injustices to health issues depicting Ronald McDonald using a bow and arrow to inflict diabetes on a Native American. Because his father was a human rights attorney, Echo-Hawk was compelled to expose issues affecting Indian Country. His Native heritage has also influenced his art; he is a traditional singer and dancer of the Pawnee Nation and an enrolled member of the Yakama Nation.

The painting created at the Hollywood event showcases the struggle to maintain Tribal culture in the hvtke man’s world, or the white man’s world.

Doris Osceola said the event was very inspiring and added she was pleased that youth – including her granddaughter, Denise Osceola, who participated in the Seminole Media Productions Workshop – had the opportunity to experience something new.

Kyle Doney, deputy director of the Native Learning Center, said that he didn’t know much about Echo-Hawk prior to the event but left with a new perspective on what kind of art he creates. Doney wants to learn more about his work with Nike.

When Nike was in search of a Native artist for the N7 line, they heard about Echo-Hawk through his online presence. He signed a three-year contract and began creating art for T-shirts, shoes, basketball shorts and jackets. Proceeds from the line benefit Native American athletic programs for  youth across Indian Country.

“It’s a way for Nike to give back to the Indian community,” Echo-Hawk said. “It’s been a big blessing for me to be a part of it.”

During the event, two people had the opportunity to win a pair of customized shoes; Echo-Hawk painted Native American images on each of the shoes and autographed them.

Echo-Hawk’s performance left a lasting impression on community members of all ages.

“There’s no limit to what you can do with what you love,” said Non-resident Liaison Kevin Osceola.