Skip to content
You are here
Home > Community > Wow – What’s the postage on that? 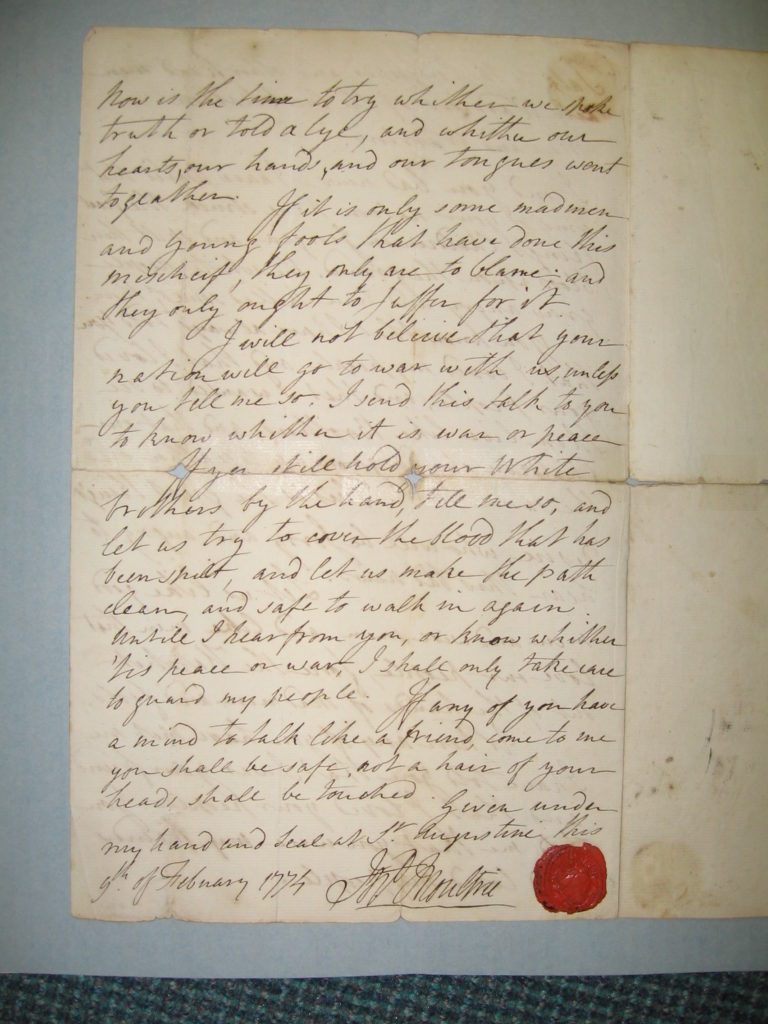 2017 is an important year of anniversaries for the Seminole Tribe of Florida. It marks the 200th anniversary of the beginning of the Seminole Wars, which began in 1817. It is the 60th anniversary of federal recognition of the Seminole Tribe of Florida as a government and a business enterprise. During the year, this column will alternately explore key events of the so-called First Seminole War and highlight the great advances of the Tribe during the last 60 years. This month we reprint an article published in the Tribune on Jan. 13, 2006 about the Cowkeeper, an early leader of the people who came to be known as “Seminole.” The article has been updated for reprint and was submitted by the Ah-Tah-Thi-Ki Museum.

The Seminole Tribe’s Ah-Tah-Thi-Ki Museum has acquired a historical document that is of considerable significance to both the Seminole people and to Florida history. Dated Feb. 9, 1774, this letter was written by the lieutenant governor of the territory of British East Florida, John Moultrie. It is addressed to “The Cowkeeper and other Headmen and Warriors of the Creek Nation.”

The Cowkeeper was the first known Tribal member to be called by the term Seminole – a term used for all Native Americans residing in Florida. He led a band of Creeks from the town of Oconee, in Georgia to Florida sometime around 1740. As a lifelong ally of the British, he aided General James Oglethorpe in attacking the Spanish at St. Augustine.

The Cowkeeper settled his people on the rich prairie lands south of Gainesville, Florida. He established a town there called Cuscowilla, or Alachua. This was the first settlement of the people who became known as the Seminoles.

At Cuscowilla, the Seminoles gathered stray Spanish cattle that roamed over the prairies. These cattle were the last vestiges of the old Spanish ranchos that once fed St. Augustine and the abandoned missions.

True to his name, the Cowkeeper had hundreds of head of cattle grazing on the prairies around Cuscowilla. These large herds were the envy of their white neighbors in Georgia. This led to a series of conflicts between the Georgians and the Seminole peoples. Cattle rustlers coming from Georgia under the guise of defensive military expeditions, returned home with hundreds of head of Seminole cattle.

Cowkeeper’s family would remain in the area for the next 100 years. Payne’s Prairie, just north of Cuscowilla, was named after the Cowkeeper’s nephew, Payne.

Payne’s nephew, Micanopy, had his name applied to the town that now sits on the ancient remnants of Cuscowilla. Micanopy’s nephew was Billy Bowlegs. These men were famous leaders of the Seminole people and can be seen in the pages of the history books as the legacy of the great Cowkeeper.

This letter was written at such an early point in the history of the Tribe that Moultrie still refers to them as members of “the Creek Nation.” The term Seminole was not yet in common use.
At the time that the letter was written, a questionable land deal that involved 2.1 million acres of land that was claimed by both the Creeks and the Cherokees had led to an outbreak of frontier violence that was threatening to become open warfare.

The English government was concerned that the Creeks were going to unite with the Cherokee and Shawnee people against the English colonies. Thirteen white settlers and five Creeks had already been killed when this letter was written. The English wanted to know if the Cowkeeper’s people were preparing for war. The British had a reason to be concerned. As a leader, the Cowkeeper had maintained the west side of the St. John’s River as the “Indian shore;” or the national boundary of the Seminole Nation. Just before he died, the Cowkeeper claimed to have killed 86 Spaniards defending this land and that his only regret was not having killed an even 100. He asked his family to kill another 14 so that his soul might rest more easily. The threat of war with Cowkeeper was a cause for serious concern.

The letter that the museum has acquired was written during the brief period between the administrations of Governors James Grant and Patrick Tonyn, and hence was written by the Lieutenant Governor, John Moultrie. He began with…

I send you bad news. I have heard that some of your nation have struck the Great King’s children in Georgia and spilt their blood upon the ground. The white people grew angry and killed some of them.

He reminded the Cowkeeper of the professed friendship between their people and went on to say:

Now is the time to try whither we spoke the truth or told a lye, and whither our hearts, our hands, and our tongues went together. If it is only some madmen and young fools that have done this mischief, they only are to blame; and they only ought to suffer for it. If you still hold your White brothers by the hand, tell me so, and let us try to cover the blood that has been spilt, and let us make the path clean, and safe to walk in again.

Until I hear from you, or know whither ‘tis peace or war, I shall only take care to guard my people.

New Governor Patrick Tonyn arrived in March. On the 14th he met with the Cowkeeper and other leaders. Outright war with the Seminoles was averted, but violence continued to plague the frontier until the next year, when an overwhelming conflict, the American Revolution, engulfed the frontier in flames. Remembered as an international conflict, it was an Indian war as well.
The letter that the Museum has acquired appears to be the actual letter that was sent to the Cowkeeper. It was originally a folded, closed and sealed page. It has the equivalent of two written pages; is addressed on the outside and has a red wax seal.

They did not use envelopes at that time, instead they would fold the sheet of paper into a makeshift envelope.

Officials would keep copies of their correspondence in a letterbook, the carbon copies of their time. The letterbook copy appears to be located in the Colonial Office records of the British government in London, England. J. Leitch Wright refers to that letter on Page 108 of his book “Creeks and Seminoles.”

The Cowkeeper is gone and the town he built is turned to dust. Many of the towns that his children and children’s children built were burnt to the ground by waves of armies. It is an amazing thing that an object as frail as a piece of paper has outlasted all else. Like a letter long lost in the mail, this letter to the Tribe’s leader and first government has been re-delivered.