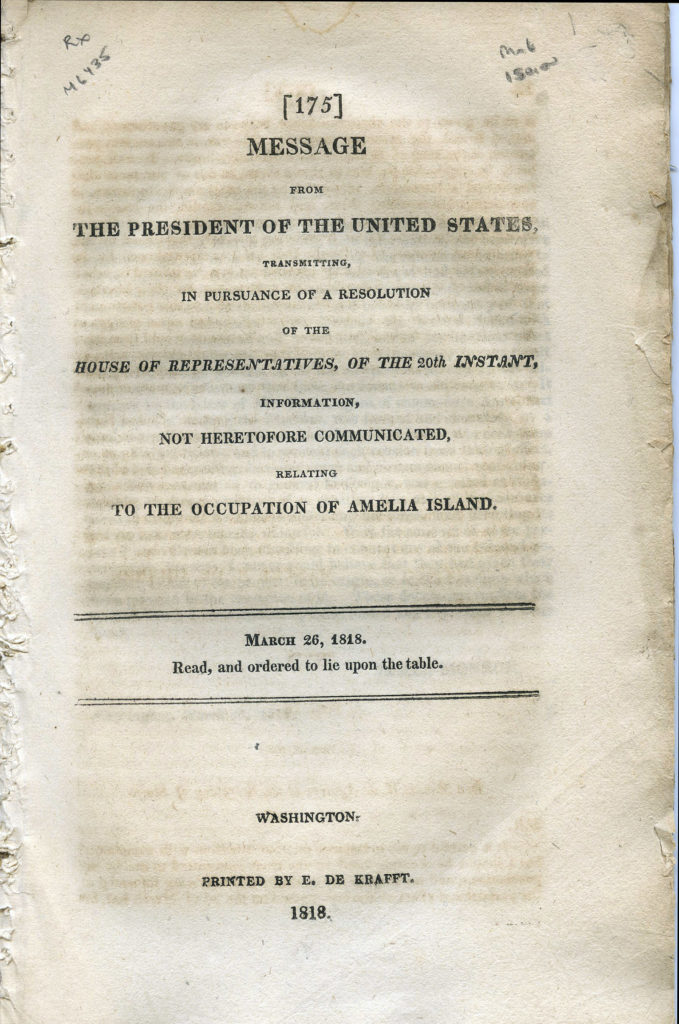 Every four months, the Museum’s Acquisitions Committee meets to review potential additions to our collection. It’s always a tough choice because resources are limited, but everything we choose to acquire is well thought out, matching the Museum’s mission, and serving the community in the best way possible. We always strive to collect objects that show the diversity and depth of the Seminole story. The best things show the past and present, struggle and innovation, continuity and change. These recent acquisitions are good examples of the range of objects we are looking for.

The first is a historic document that dates to 1818. While it’s not the oldest document in our collection — we have to give that honor to a letter penned in 1794 — it’s in the running. In 1818, a disparate group of native peoples had already been dubbed “Seminoles” by the colonial players in the southern U.S. and Spanish-held Florida. The first hostilities between the Seminole people and the U.S. government had erupted in northwest Florida, but had yet to affect all native peoples in Florida. The U.S. had its sights set on Florida. The Seminoles knew that United States’ rule would differ from Spanish or British rule, which was preferable. Spain and England had a hands-off approach to Seminole and other native peoples in their colonial holdings while the United States operated under a model of Manifest Destiny, meaning that the lands they colonized were for their citizens only, according to a God-given right. Likewise, the U.S. wanted Florida in this unyielding way. Amelia Island, off Florida’s east coast, was a frequent setting for the power struggle between the U.S. and Spain over the control of Florida.

This document, entitled, “Message from the President of the United States Transmitting…Information not Heretofore Communicated, Relating to the Occupation of Amelia Island, 1818,” describes plans for an attempt to loosen Spain’s hold on that island. The story, filled with espionage and subterfuge, is interesting enough in itself. However, that does not make it relevant to the Museum’s mission, which is to celebrate, preserve and interpret Seminole culture and history. It was a short mention of Native Americans that struck a chord with our committee, both in an emotional sense and in the sense that it planted the acquisition firmly within the bounds of the Museum’s mission statement.

When describing the planning that went into the military operation, the narrator notes that the general and his supporters intended to recruit troops from various locations, including “Tampa Bay, a fine harbor to the northwestward of Cape Florida, where they were to be joined by 1500 Indians already engaged … to march across and attack St. Augustine.” From that point, it was a short trip to Amelia Island. The 1817 campaign proved successful in the sense that it allowed the United States to maintain a continued presence on Amelia Island until it could officially take control of Florida from Spain in 1821. Did 1500 Native Americans really help? Were they Seminoles or their allies? The document doesn’t give these specifics; however, wouldn’t this be ironic, considering that the U.S. began to systematically erase them from Florida through removal or slaughter less than 20 years later?

This is just one piece of the Amelia Island story, which is a small part of the Florida story, and an even smaller chapter of the story of Native American struggle in the colonial “New World.” The archive at the Ah-Tah-Thi-Ki Museum has many documents just like this, which reveal part of the larger Seminole story. While the archives are currently closed for a renovation project, they will again be open to the public in fall 2017. If you’d like to conduct research on this or any other topic of Seminole history, just make an appointment with the Museum library (863-902-1113) and we’ll be glad to assist you.