Skip to content
You are here
Home > Sports > Whitney Osceola rebounds in life thanks to basketball, daughter 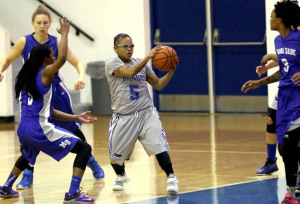 DAVIE — When Whitney Osceola arrived at tryouts for the Broward College women’s basketball team, head coach Melissa Baker wasn’t expecting much from the player she knew little about.

The 5-foot-1, single mother who had battled addiction problems and had been away from basketball for four years seemed an unlikely candidate to take a spot on any college basketball team.

Determined to use education and athletics to carve out a better life for herself and her 3-year-old daughter, Janiya, Osceola enrolled at Broward and made the team despite seemingly insurmountable odds. Not only did the freshman guard win a spot on the roster this season, but she also earned a scholarship and quickly became a meaningful part of the program.

Baker said Osceola’s love for the game and life “ignited everyone.”

“She was a walk-on, but she worked really hard at the beginning of the season and gave us this passion, this light, and I gave her a scholarship for it,” Baker said. “She’s a great story.”

Not all the chapters in that story have been cheerful, but the current one is filled with inspiration and perspiration as Osceola pursues her goals, which include earning a degree from Broward and then moving on to a Division II college.

“She’s trying to get her education, follow her passion of basketball, plus be a mom. She’s doing some great things,” Baker said. “It’s really hard. She’s got a lot on her plate.”

After she tackles her academic goals, Osceola has her hopes pinned on a potential career with the Tribe.

“I want to do business administration, but I’m kind of leaning toward political science because I really want to get involved with my Tribe,” said Osceola, who grew up on the Hollywood Reservation. “I think to have a background in politics and know how government works and the economy, maybe I can give a little back to my Tribe positively.”

Osceola faces challenges before the sun rises. Just getting to school for predawn practices before classes poses obstacles for Osceola, who lives in a Pembroke Pines apartment with a relative. Osceola doesn’t own a car, so she often uses a bicycle for the 7-mile trek to Davie. The pedals start moving at about 4:45 a.m.

“We have 6 a.m. practices,” Osceola said. “I have late nights because I have to study. I’ll get like three hours of sleep and then come to school and be here by 5:30. I’m always the first one on the court in the morning. I go to class, then I sleep in the locker room (between classes) because I’m so tired.”

While juggling books and basketballs, Osceola registered a 2.3 grade point average in the fall semester.

“It’s not where I want it to be, but getting back into the groove and everything, I was real proud of myself. This semester I plan to get A’s and B’s,” she said.

On the court, Osceola has received passing grades, too. Baker described her as “our energy.” Although Osceola is not a starter, her impact – be it her relentless defense against players often several inches taller or her high-powered intensity that brings her out of her chair as often as the team’s coaches – is felt if she’s in the game or on the bench.

Osceola, who said her parents live in other states, pointed to her own support system locally that provides a vital foundation in her life.

“She’s basically raising her while I get my life together,” she said.

“It’s my work ethic, but it’s her keeping my mind straight,” Whitney Osceola said. “She doesn’t sugarcoat anything. She tells me how it is. When I’m slacking, she lets me know that I’ve got to pick it up. She’s at every game.”

Osceola spent Jan. 7 – her 22nd birthday – playing in front of a handful of her supporters, including her sister Chauncey, Geraldine, Kendra and a tiny bundle of joy who sprinted onto the court to hug her mother during halftime of Broward’s 83-68 home loss against Miami Dade College at the George E. Meyer Gymnasium.

Osceola carried Janiya into the locker room at the break. Midway through the second half, with her daughter watching from the bleachers, Osceola scored her only points of the game on a 3-point shot that trimmed Miami Dade’s lead to 11, but Broward’s rally fizzled as the Seahawks’ record fell to 3-11.

Broward’s third victory of the season came Dec. 29 as Osceola had three points, two steals and one assist in a 94-51 win against the University of Wisconsin-Waukesha.

After being away from basketball since 2011, Osceola encountered nerves and conditioning issues upon her return.

“I was nervous, but I came in and made a 3 my first game,” she said. “I’m still kind of overweight, so I still can’t really move like I want to, but being a part of a team again is just amazing.”

The team provides an international education in itself with players from Estonia, Spain and the Netherlands on the roster. Osceola said she’s learned about their cultures while telling them about her own.

“The one from the Netherlands cooks three times a day. She doesn’t eat any fast food,” Osceola said. “My Estonia friend, Jane, comes from a country where you don’t talk on the basketball court, you just play. The one from Spain barely speaks English, but she’s very outgoing.”

Before the season, Osceola hadn’t been on a team since high school when she played for two years at American Heritage School in Plantation. During her senior year, she stopped attending classes when she became pregnant with Janiya.

“I’ve been through a lot in my life – rehab, addiction…,” said Osceola, who tearfully admitted that her addiction “took a toll and I hit rock bottom.”

But Osceola is proof that a 5-foot-1 guard can be a big rebounder. She bounced back, earned her GED and said she has lived a clean life since last spring.

“March will make it one year,” she said.

Osceola said her determination to play basketball, earn degrees and make a better life for her family keeps her motivated.

“She’s very resilient and it’s all because of her love for life,” Baker said. “She’s a great, great inspiration. She motivates a lot of people around here.”