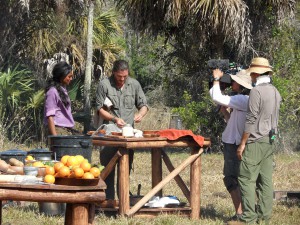 BIG CYPRESS — Picture a trio of chefs who travel the world, conquer cooking challenges and throw a spear at a target with about 20 percent accuracy. Tribal member Sam Tommie got the chance to witness just that as he taught chefs of the TV show No Kitchen Required how to throw a spear – with a laugh or two.

“I knew the spears would be flying sideways and backwards,” Tommie said. “I was laughing my head off.”

The three chefs bearing traditional fishing gear were Madison Cowan, Michael Psilakis and Kayne Raymond. No Kitchen Required is a new series on BBC America that follows these diverse chefs as they travel into indigenous communities around the world and compete to create the most unique, yet traditional dishes of each community visited. The chefs choose which ingredients they prefer to use and can even add their own personal twist, but they must maintain the manner in which the natives of the community prepare their food.

For their 10th episode of the season, the producers of the show contacted the Seminole Tribe of Florida and arranged for Tommie to be the location manager. Tommie is a freelance filmmaker who began working professionally in 1979.

On Feb. 15, the team arrived just outside the Big Cypress Reservation via seaplane; they met with a group of Tribal members who were ready to teach their guests the Seminole ways. The filming spanned three days.

“I felt like it puts a light on our culture and educates the outside world, which is really important to us,” Tommie said.

After a tour of the swamplands, courtesy of Tommie, a traditional swamp dance and a feast of traditional foods were presented to the guests as a welcome. Fried alligator, deer, vegetables and garfish cooked on an open fire and sour orange and sugarcane drinks were served to the chefs in order to expose them to Seminole cuisine.

Tommie said he appreciated Notional (the company that produced the show) and BBC America for being open-minded, respectful and ahead of their time, making everyone involved feel comfortable.

“They gave us the freedom to conduct things the way we wanted,” he said.

The competition began with a Native Challenge demonstrated by Tommie, which is when spear throwing came into play. Whichever chef hit the target with the spear got to pick which protein he would prepare for the cooking challenge. Although ridiculous and clumsy at first, the challenge bore a winner, Raymond, who chose garfish as his protein. They were then taught by their chosen guides – three Tribal members – how to hunt and gather their ingredients; Tribal members Adam Turtle helped with the garfish, Jason Baker with the wild hogs and Charlie Micco with the alligator.

Each chef hunted his own meat and gathered raw materials with the skills and equipment provided by the guides, such as bows and arrows for hunting and gigs for spearfishing. After the chefs’ cultural enlightenment, they began to work on their masterpieces.

The four judges, Beverly Osceola, Tommie and his daughters Lorelei Tommie and Jerica Tommie, of the Miccosukee Tribe, judged the three meals that each chef created with his chosen protein.

Psilakis crafted a soup consisting of alligator tail, hardboiled eggs and swamp cabbage, along with deep-fried alligator bites and french fries, alligator ribs, alligator heliopitas and a sour orange and sugarcane drink. His protein of choice was, surprisingly, alligator.

Cowan’s menu was based off his protein of choice, wild boar, and was made up of pork shoulder and heart patty sausage with cheese grits, lime pork tenderloin with onion gravy, Mofongo (a Puerto Rican dish) with garlic, sweet potato frybread and swamp cabbage with bacon, garlic and onions. Raymond crafted a whole roasted garfish stuffed with rice as well as frybread with caramelized swamp cabbage, among other unique dishes. To say the least, the judges were impressed.

“I wasn’t expecting the food to be that great,” Jerica Tommie said. “It made me want to learn to cook the way they did.”

The dishes left the judges not only surprised with their skills as chefs but also with respect toward the men’s talent to preserve the traditional and authentic taste. Tommie even remarked that Raymond’s gator tail was some of the best she’s eaten.

“The judges were inspired to be more creative with our own traditional food,” Sam Tommie said with satisfaction. 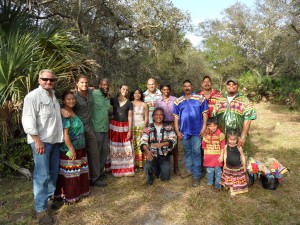 The experience inspired them to also value the traditional food, the way it is prepared so carefully, and to feel pride in the Seminole culture.

The episode aired on June 5. With it came thorough gratification and excitement, not only from all the Tribal members involved, but also for the Seminole and Miccosukee communities alike. “It gives insight on our customs and culture,” Jerica Tommie said. “It’s a nice window into how we are and how we behave and our hospitality.”

No Kitchen Required offered an incredible opportunity for Seminole representation on a national scale and for educating the public about the real identity of the Seminole Tribe of Florida. Although at times a bit fast-paced and hectic, Sam Tommie said the filming was pleasant and the crew was excellent. He described the chefs as personable, down-to-earth, talented and friendly.

On the last day of filming, the winner of the cooking competition, Psilakis, received a patchwork shirt as a gesture of gratitude and honor, and the chefs each expressed their own appreciation toward the Seminoles.

“I’ve never been to Florida before, and I don’t really know anything about the people, the food, even the land,” Raymond said upon arriving in the Everglades. “It’s so unique and it’s nothing that I’ve ever seen before.”

But he certainly left the Everglades with a true awareness of who the people are.