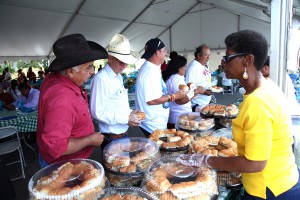 BRIGHTON — Featuring a unique, “diabetes friendlier” menu, the new Brighton Trading Post Subway store officially opened June 18 with music and a popular, hands-on nutrition display by the Tribe’s Health Department. A free lunch was provided for a gathering of several hundred Tribal members, friends, tourists and staff beneath a big, white tent on Harney Pond Road near the southern end of the Brighton Reservation.

According to Subway officials, this is the first stand-alone Subway on an American Indian Reservation and first to offer the “diabetes friendlier” menu.

“This Subway is really good for us,” said Health director Connie Whidden from a speaker’s podium at one end of the tent; trays of 6-inch sandwiches, yogurts, chips, fruit and salads lined either side. “There are a lot of good, healthy choices on the menu to make when selecting a sandwich. Just try to stick with the healthy choices.”

“I’m glad this day finally got here,” he said. “We had delay after delay after delay. It seemed like every time you turned around there was someone who wanted to splash holy water on the project.”

Several speakers credited Brighton Board Rep. Larry Howard for his determination to keep the Subway deal on track as part of a complete renovation of the entire Trading Post complex – which was a promise he made to community members during his campaign last year.

While the Subway festivities went on, a flurry of workers with bulldozers, forklifts, pressure washes, shovels and paint rollers kept working. Rep. Howard said the long-awaited store would be open July 13 and the new RV Park by Nov. 1.

“This is definitely a step in the right direction,” he said. “I’m trying to knock everything out of the box that I promised.”

Subway executive Joe Candito praised the Tribe’s Health Department for supporting the project, pointing out that “only a handful” of Subways among 37,000 restaurants worldwide qualified to feature the “diabetes friendlier” menu. He called Chairman James E. Billie “a pioneer in the health consciousness of the Seminole Tribe.”

It was Chairman Billie who first met with Subway officials more than 18 months ago, “before I even knew if they were going to let me on the ballot,” said the Chairman, whose daughter Aubee Billie, the current Jr. Miss Seminole Brighton, was among the Tribal royalty welcoming the crowd.

The Chairman said that longtime friend and business consultant Bryan Cohen of Fort Lauderdale approached him in late 2010.

“I weighed 270 pounds, and I think he was concerned,” Chairman Billie said. “He asked me, ‘How would you like to have a Subway out here on the Brighton Reservation, just down the road from where you live. You could be the new Jared and lose all that weight. You need to go on the Subway diet and lose that weight.

“Well, the next thing you know, negotiations began with the Board of Directors to bring in a Subway, and meanwhile, I tried to maintain the weight; if I was the new Jared, I needed to. Then, as you know, a stroke came along in January and knocked me on my hook-chee really bad.”

“Now I’m eating the Subway sandwiches,” said Chairman Billie, who has lost more than 30 pounds in the past few months. “What you see out here today is really taking shape. (Rep.) Larry Howard decided to renovate the whole area, and now this is probably one of the most popular places on the reservation.

“I particularly like the greasiest stuff they got,” the Chairman added, “but that’s not what I’m supposed to get!”

Brighton Subway franchisee Mo Patel pointed out that the nearest Subways to Brighton are more than a 20-minute drive away.

“I really think this is going to be a successful venture for the Tribe, especially with our new menu,” said Patel, who owns several other stores in South Florida.

The menu was certified “diabetes friendlier” by medical experts at the Diabetes Research Institute at the University of Miami Miller School of Medicine. The menu consists of most of the familiar Subway sandwiches, but the core of the bread is removed from 6-inch subs, decreasing the carbohydrate, sodium, fat and calorie content in the sandwich without affecting familiar taste. Also, items on the menu that are high in these areas have been omitted from the recommended sandwich and salad builds.

“And now that summer is here, you can get outside with your children and exercise,” Whidden said. “Go get yourself a bike, and go bike riding with your children. Remember, the older we get, the more exercise and less food we need.

The Brighton Trading Post Subway will be open from 6 a.m. to 10 p.m. on weekdays and will stay open an hour later on weekends.