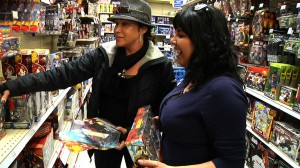 The undertaking began in Florida by collecting non-perishable goods, clothing, blankets, toys and money for the Sioux community, which suffers an unemployment rate of more than 80 percent.

Once the Seminole Tribe gathered the donations, Bobbie Jaime Billie, Misha Winters and NRF President Petties Osceola III drove a heavily loaded truck more than 2,000 miles to deliver the items to the Pine Ridge Reservation. Billie dropped off the items to nine different districts on the reservation once they arrived in South Dakota.

“It is very timely to receive these items during the holidays,” said Jackie Big Crow, assistant to the fifth member of the Oglala Sioux Tribe. “We are very grateful for the assistance. It has helped a lot of people reservation-wide. We are appreciative to the Seminole Tribe of Florida.”

In addition to the items collected through the community, Seminole Tribe President Tony Sanchez Jr.; his wife, Paula Bowers Sanchez; and two of his children, Toni Ashley Sanchez and Jesse Sanchez; along with Alice Sweat of the Brighton Reservation and non-native volunteer Caroline Gama, purchased toys at Target and Toys “R” Us to deliver to a Pine Ridge Indian Reservation school, the Wounded Knee District School. All 170 students received a gift because of donations received through the Native Relief Foundation.

“For me it wasn’t necessarily coming in as the President of the Seminole Tribe; for me it was just one Tribal member helping out another Tribe,” President Sanchez said. “I think that anytime we could help, not just the Seminole Tribe, but any Tribe can help, they should step up and help when they can and however they can.”

“We are ever so grateful that the Seminoles would come this distance and buy toys and make sure that every child has a Christmas toy,” said Marnee White Wolf, principal of the Wounded Knee District School. “There are no words to express something like that.”

Sweat, project director of the Community Care for the Elderly, has made the trek to Pine Ridge with donations for seven years, but the experience still moves her.

“I’m just so thankful that the Tribe has stepped up to do this,” she said. “I know that there has been a need for years. I’m just glad to be a part of it.”

Days of driving on the road and hours of shopping and delivering items for Christmas helped make a huge impact on a community truly in need.

“We feel in our hearts that we have been so blessed, so why not help?” Paula Bowers Sanchez said. “I feel like we’re almost obligated because these are our Native brothers and sisters and we should help them.”