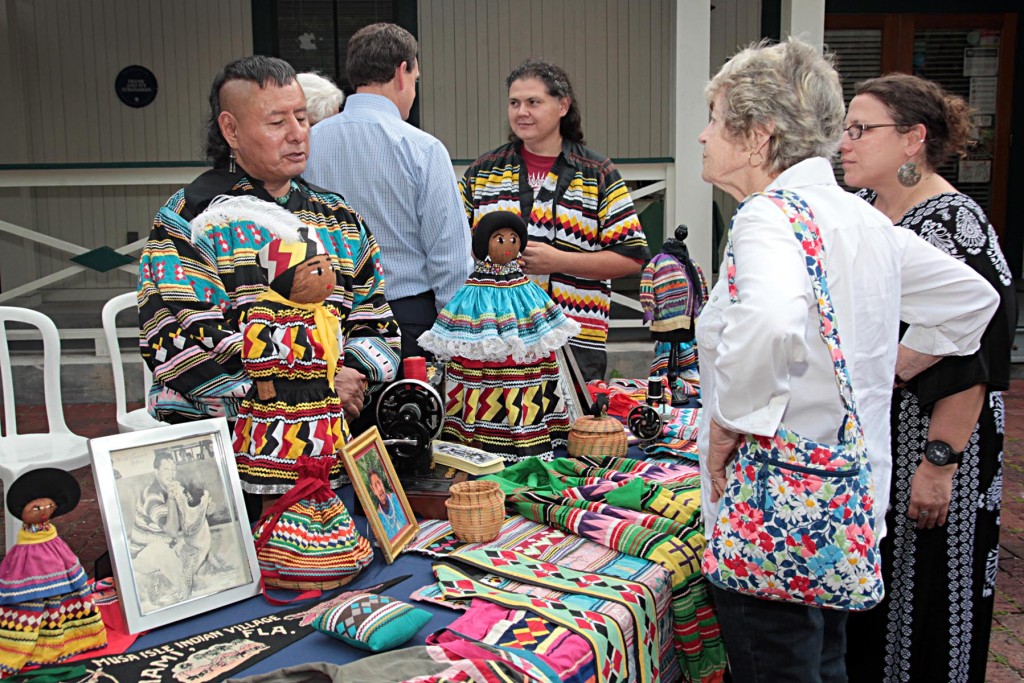 FORT LAUDERDALE — Seminoles have traveled to Stranahan House in Fort Lauderdale since the early 20th century when they traded, learned English and stayed for days at a time. Tribal members gathered again at the historic site April 30 to promote Seminole art and culture at the launch of the Tribal Art Project.

The project, conceived by Upper Room Art Gallery owner Robin Haines Merrill, was a winner of the John S. and James L. Knight Foundation’s Knight Arts Challenge in 2013. The event at the Stranahan House was held to raise money to meet the requirement of a $30,000 matching grant.

“Robin is trying to start an art village and incorporate Seminole culture into it,” said Pedro Zepeda, who will contribute his artistic skills by carving a canoe. “It’s an interesting way to promote the arts district.”

The Tribal Art Project will be held at Merrill’s art gallery located on Las Olas Riverfront near SW First Avenue and the New River. Zepeda will carve a traditional 13-foot dugout canoe from a cypress log at the gallery. He plans to work on the project a few days a month and expects it will take a year or two to complete.

The project combines art and community. During an October event, called “Paddle Up,” dugout canoes, paddle boards, kayaks and modern canoes will make their way down the Himmarshee Canal in Fort Lauderdale to highlight the area’s rich history. Because Zepeda’s canoe won’t be ready in time, Merrill plans to use replica dugout canoes, including one from the Ah-Tah-Thi-Ki Museum.

The arts district will also feature other cultural aspects of the Tribe, including patchwork.

Larry Mike Osceola II displayed vintage and modern patchwork pieces along with traditional sweetgrass baskets and dolls made by his mother, Minnie Doctor, at the kick-off event.

“I hope to bring understanding of patchwork and its history,” Osceola said. “It’s one of the most iconic art forms in Florida, and it all started with Singer sewing machines and fabric, which Seminole women got from Stranahan.”

Merrill, who has worked with the poor in the Philippines and has participated in cultural exchanges in China and Upper Mongolia, feels strongly about indigenous art. Once the canoe project begins, she will post video and stop-action photos of its progress in the window of the gallery.

“We want to broaden the scope of non-Native American people and integrate art and culture into activities in the community,” she said. “It’s important to be able to pass it down and let other people see it. Everyone can learn as they watch the canoe being carved. It’s not just about saving the art that’s being lost; it’s also about the experience and the act of creating arts and crafts.”