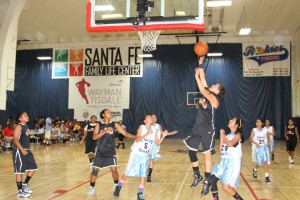 OKLAHOMA CITY — Five Florida Seminole teams and one golfer took the journey to Oklahoma City on June 10 to compete in the inaugural Jim Thorpe Native American Games, winning three medals in the process.

In honor of one of the world’s greatest athletes, the Jim Thorpe Games were held June 10 -17. More than 1,000 Natives from more than 70 Tribes competed in several sports, including basketball, softball, tennis, golf, volleyball, wrestling, cross country, track and field, martial arts and stickball.

Hollywood Councilman Marcellus W. Osceola Jr., who attended the Games, was proud of the Tribe’s involvement.
“I think the Tribe being out here is a positive influence on these Games – not only on the Games, but on our Tribe as well – to see our participants here for the Tribe and show out in big numbers like we have on such short notice,” he said.

The Games were held throughout the city in many venues, including the Amateur Softball Association of America’s Hall of Fame Complex, which was home to the women’s College World Series just a few days earlier.
In addition to the athletic competitions, the Games included an opening ceremony, stickball exhibitions, a trade show, interactive exhibits and clinics and an all-star football game.

The competition celebrated the Native American legend Jim Thorpe and the 100th anniversary of his record-setting Olympic performance in Stockholm, Sweden in 1912.

Jim Thorpe, to many sports historians, was known as the greatest all-around athlete of his time – and possibly, in the history of sports. He competed in many sports, including basketball, football, lacrosse and baseball.

Among his accomplishments, Thorpe received gold medals in the decathlon and pentathlon in the 1912 Olympics; he was a professional basketball player and football player best known for running back, defensive end and kicker.
According to the Games’ executive director, Annetta Abbott, this year’s goal was to educate young Natives about Thorpe and maybe find the next Jim Thorpe.

“Anything that he tried he excelled in,” Abbott said. “He was known as the world’s greatest athlete. Our job is to let these kids know, are you the next world’s greatest?”

The Seminole Tribe was well represented at this year’s games. Along with the five youth teams, the Tribe brought several coaches, staff and family members who were able to make the flight to support the youth. The Tribe also had EMTs on site at each game in case of emergency.

Although the Seminoles were defeated by the Oklahoma Red Warriors in a 13-3 mercy run rule, they came out of the loser’s bracket with a 19-0 win over the Stingers. Already playing two games under Oklahoma’s hot sun, the Seminoles were not finished yet. They played their last game of the night with a tough10-6 win against Red Race, which gave them a chance at the championships.

The tired Unconquered Lady Seminoles, having played three games the day before, came up short with a 3-9 loss against the Red Race for second place in the championship game.

Wildcat Jumper said the girls fought hard and he couldn’t fault them because they played well.

“I couldn’t ask my girls for anymore. They put their hearts into the game,” he said. “I can’t fault my girls nowhere. We just came out on the short end of the stick.”

While the softball games were being played, Tribal member Johnny “Trey” Boone III teed off shortly after 10 a.m. on June 11 at the Lincoln Park Golf Course.

Keeping up with the leader at times, Boone played well with support from his dad and caddy, Johnny Boone Jr., and mom, Gale Boone. Family friend and former golfer Councilman Osceola was also on hand to support him.

Boone played two rounds of golf, scoring a 78 on the first day and an 82 on the second day, earning a total of 160 for the tournament. Overall, he tied for second in the boy’s 18-and-under division. However, the tournament used the handicap hole of the front nine holes to break the tie, which Boone bogeyed one over par. Receiving the bronze medal, he represented the Tribe and his family well.

No matter how the scoring played out, Gale Boone said, “We are still proud of him and the bronze medal.”

Finally, the last games to be played for all the Seminole teams were basketball, which went from June 12-15. The teams had the opportunity to play at Oklahoma City University and the Santa Fe Family Life Center.

The 19-and-under team J.U.S. (Just Us Seminoles), led by head coach Andrew J. Bowers, stayed on top all the way to the final minute.

With help from their leading scorer, Duelle Gore, J.U.S. won several games, including a 55-46 win over Hostile Natives and a 55-31 win over the Red NABI team.

Playing the championship game against the NABI White, J.U.S. had a tough competition on hand. They played hard all the way to the last second for a 37-34 loss to a controversial lane violation call that could have put J.U.S. into overtime. Despite the rocky ending, J.U.S. proudly accepted their second place for silver.

The Seminole teams represented the Tribe well, and they agreed on one thing: They enjoyed playing in such a celebrated tournament as the Jim Thorpe Native American Games.

“Jim Thorpe was a good athlete back in his days, so it’s an honor to be able to play in something like this because a lot of Natives come around just to participate in these games,” Gore said.