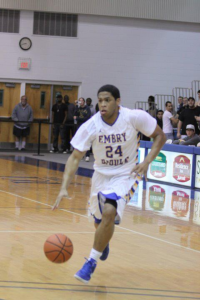 Basketball is a popular sport on the reservation and a healthy hobby for Tribal youth. DeForest Carter and Courtney Osceola are a couple of Tribal role models who continue to play while striving for academic excellence in college.

As a kid growing up in Big Cypress, DeForest Carter loved playing football. But the rest of his family enjoyed basketball, so Carter often found himself watching them play. When he was 10 years old, he tried it and liked the game so much, he hasn’t stopped playing. Today he plays for his team at Embry-Riddle Aeronautical University in Daytona Beach as a shooting guard.

“I love the sport and have met so many people through basketball,” Carter said. “I never thought I’d leave my reservation, but it has given me so much opportunity.”

Carter played for his high school team, Montverde Academy located west of Orlando, which has a nationally and internationally renowned basketball program. He received the Coach’s Award in both junior and senior years of high school. The award is given to the player coaches pick as best all-around team player. From there, he earned a scholarship to Embry-Riddle.

“A lot of my high school teammates went to NCAA Division 1 schools like Villanova and FSU,” he said. “I chose Embry-Riddle because they said I could play right away.”

A member of the National Association of Intercollegiate Athletics Division 2 and The Sun Conference, the team’s season starts in September and runs through March. Although the basketball season is long, Carter focuses on academics.

“It’s school first and then basketball,” said Carter, a sophomore studying business administration. “The coaches make sure we focus on schoolwork and keep our GPAs at (a minimum of) 2.0 individually and 3.0 for the entire team.”

Carter has met people from all over the world through basketball and has even played against some NBA players through the Amateur Athletic Union while in high school. He always thought about going into business for himself, but he wants to come back to Big Cypress when he graduates college to start a basketball team there first.

“Basketball is a sport that requires hard work,” he said. “Just having talent won’t take you anywhere. As long as you work hard, you can succeed in anything.” 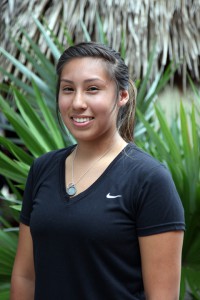 Tribal athlete Courtney Osceola, 19, is also chasing her dreams and encourages all Tribal youth to do the same.
Osceola, daughter of Joe Dan and Virginia Osceola, Bird Clan, has made a name for herself on the basketball court by emerging as a key player while attending University School in Davie. She continues to play in intramurals as a sophomore at Georgetown College in Kentucky.

“I think of her as a shooter,” he said as North Broward took on University School in the Class 3A Regional Finals during her senior year. “She’s a tough, tough player.”

Playing to her strengths as a forward and point guard, Osceola helped her school qualify for regional finals for the first time in history. Although they lost, her coach had positive things to say about her performance.

“Courtney is an all-around unselfish person and student athlete,” University head coach Greg Farias said. “All that shows on the court. She has the ability to score at least 20 points per game, but she’s all about helping her team out.”

In high school, Osceola earned impressive accolades: MVP of her freshman and sophomore years and the Coach’s Award for her junior and senior years. One of her career highlights was helping the Tribe’s You Don’t Want It team win the 2010 NAYO tournament. She also played in all-star games for 4 Love of the Game’s March Madness tournament and Broward vs. Dade counties during high school.

Traveling is one of Osceola’s passions, and basketball tournaments have helped make that happen. She’s competed in Canada and across the nation, including New York, Las Vegas and Hawaii.

Basketball also gives Osceola a healthy outlet for stress and emotions, she said.

In addition to playing, she’s expanded her horizons by coaching. Osceola coached the Tribe’s women’s team in the 2012 Native American Basketball Invitational.

“Coaching is a change,” she said. “It’s a lot more thinking because you have to analyze what the other team was thinking.”

When it comes to academics, Osceola is currently interested in journalism. Whatever she ends up studying, she wants to bring her knowledge back to the Tribe and work for them, she said.

Her advice to youth is this: “Find out what you love and stick with it…There are so many possibilities for us.”