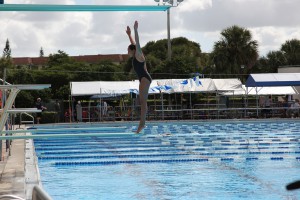 Tribal youth Carson Knaby of the Davie University School swimming team is a hidden gem ready to shine bright in the coming years.

As an eighth-grader she has made strides as an underclassman competing with the best of the best in class 1-A as a diver.

At close to four years competing, her dedication has brought her three straight district crowns and she reached her goal of going to the state championships, an accomplishment which eluded her last year because of a strained tendon in her foot.

Among seven other competitors, Carson finished fifth leaving fate and her scores as the decider with only the top two automatically qualifying for state competition.

In the end, a personal best score of 377 (28 points off the school record of 405) in the 11-dive championship format on the one-meter springboard was enough to make the trek to Orlando to participate among 24 of the state’s best on Nov. 11.

“She has gotten better every year,” said father Doug Carney of her progress. “She is a consistent diver. You will see some that will be on and off of their game; she isn’t.”

“Carson has had the willingness so far to take on a sport with tremendous parameters,” Hansell said. “She just keeps knocking on the door though. I like her ability to continue to challenge herself. I tell her and her teammates to not let fear interfere.”

“She is taking the proper steps up the ladder,” she continued.

Knaby went on to make the finals at state finishing 14th and is the first female diver in more than a decade to achieve such an honor for her school, according to Hansell.

She also currently owns the six-dive school record for total points in one meet.

Sports are a part of the family with Knaby also running track and field and past participation in gymnastics, with older brother J.J. playing football.

“I have liked meeting new people and feel good about what I’ve done and doing my best,” Knaby said. “It does make me nervous though knowing that the other competitors are older or may be better, but it also makes me feel good knowing that I’m competing against them.”

Swimming seems to be a natural for Knaby as she competes year-round (also with the help of a private coach), despite having no ties of participation in the sport by any other family member including mother, Joletta John-Carney, or father, Doug.

“She had a lot of training this past summer. Her work ethic has been great and she wanted it. She’s a big competitor and has always stayed in the hunt throughout the year,” Joletta said.

All agree the sky is the limit for the talented novice.

Knaby said competing is all in good fun and her future plans remain open for now.