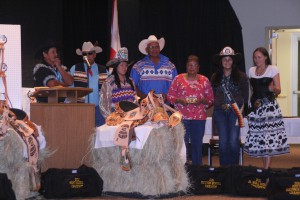 BRIGHTON — Members of the Eastern Indian Rodeo Association (EIRA) gathered at the Brighton Veteran’s Building on the evening of Oct. 14 for the 2011 Year End Banquet and Awards Ceremony.

Competing in rodeo competitions throughout the past year, the members have worked hard to accumulate sufficient points to become EIRA Champions, Reserve Champions and Qualifiers for the Indian National Finals Rodeo (INFR) which will be held in Las Vegas, Nevada, in the beginning of December.

“We have just completed our 13th season,” said EIRA President Paul Bowers Sr. “During this time it has been my pleasure to work with some of the finest people in EIRA history, and I want to thank you, the members, directors, stock contractors, secretaries, pick up men, arena crew, announcers and judges for making this possible. I do not see tonight as an end, but instead, it is a beginning to a new year.”

EIRA Vice President Mackenzie Bowers and Secretary Melissa Gopher acknowledged the participants and staff that made it possible for the organization to grow and prosper since its inception in 1998. “As we head to the INFR, remember that we have proven our talent. Even though the competition from across the country will be tough, I have no doubt that we can bring home the gold,” Bowers said.

Marki Rodeo stock contractor Marty Johns expressed his gratitude to everyone that contributed to another successful year. “We have worked hard to energize our stock and create an equal playing field for all of the contestants,” he said. “It has paid off because we have been asked to take 19 of our animals to compete in the INFR and two of our champion bulls will be going to the World Championships at the National Finals Rodeo this year.”

Following the invocation, Moses “Big Shot” Jumper Jr. said, “This year’s youth rodeo is the largest that we have ever had and comprises more than 100 families. The non-sanctioned events are providing our youth with a teaching experience and create a feeder system for the next generation of rodeo contenders. During the past few years, the INFR has added several Junior Rodeo events and we have a fine group of youngsters to represent us.”

“All of the people who took part in this year’s rodeo competition deserve a round of applause,” said EIRA Champion and INFR President Richard Bowers, Jr. “The tour rodeos hosted this year by the EIRA have been recognized by the INFR as two of the major events of their year. Your participation has gone a long way toward the advancement of Native American rodeo athletes.”

The Junior Cypress Memorial Rodeo is held each year in conjunction with the Big Cypress Cattle Drive. Junior Cypress was a strong advocate for the reservation youth and rodeo sports. Thanks to a sponsorship in their father’s memory, Jonah Cypress and Esther Buster made this rodeo one of the season’s biggest events. Association members awarded them engraved gold and silver buckles for their generosity.

The auditorium filled with laughter and cheers as the audience viewed a 20 minute pilot known as “Biggs Bloopers” that included blunders and wrecks that occurred in the arena during the past year of EIRA rodeo.

The Year End Awards Banquet signified that the red dust of the arena had cleared, the points had been tabulated and the time had arrived to announce the winners. 2012 Sr. Rodeo Queen Erena Billie and Jr. Rodeo Queen Calgary Johns assisted the event directors in presentation of awards. Tooled and engraved breast collars and monogrammed rough stock bags were presented to the Grand Champions. Reserve and Regional Finals Champions received engraved gold and silver buckles.

Josh Jumper and Shelby Osceola participated in as many events as possible throughout the year and their skills, determination and hard work paid off when it was announced that they had accumulated the most points for the year. As Men’s and Women’s All Around Champions, they were presented with commemorative saddles. All Around Boy’s and Girls Champions, Jobe Johns and Kalgary Johns received tooled breast collars.