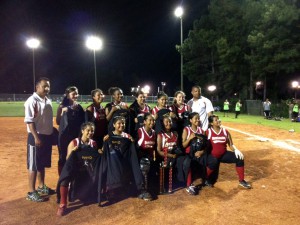 Categorized by age, about 500 youth on teams from the Seminole, Cherokee, Choctaw, Seneca and Poarch Creek Tribes competed in boys’ baseball and girls’ fast-pitch softball. About 250 Tribal members attended the tournament to cheer on the Seminole teams.

“It’s a great thing that brings Tribes together,” said Moses Jumper Jr., a founding member of NAYO and a coach at the tournament. “Relationships have developed and endured through sports, and it has given our young people a sense of unity.”

Established in the 1980s, NAYO unites Native American Tribes across the country for friendly competition through sports. Its founding Tribes (Seminole and Cherokee) and those who joined shortly after (Choctaw, Seneca and Poarch Creek) still form the core of the organization, Jumper said, but all non-member Tribes may participate in the tournaments. Annual tournaments include baseball and softball in the summer and basketball in the spring. The host Tribe sponsors the tournaments, which rotate between Tribes.

“We’ve always been a mainstay because we’ve always seen the importance of it,” Jumper said.

The Seminole sports program, which has a reputation of being one of the top in the Southeast, performed well in this year’s tournament. Results of the Seminole teams included one championship and one third-place finish. The Super Seminoles-Brighton, a girls’ 16-18 team, won their division, while the Unconquered Lady Seminoles, a girls’ 13-15 team, placed third.

“We aren’t a very big Tribe so we have fewer kids to choose from, but we still do very well,” said Wildcat Jumper, Recreation aide in Brighton and a coach at the tournament. “When we win, the other Tribes don’t like it too much. They are all working to get better in athletics.”

Wildcat Jumper, who grew up playing in NAYO tournaments, understands the rivalries and sees the Tribal kids figuring it out, too.
“They know they have to work to get better,” he said. “It’s fun to have a rivalry; it gets them motivated. It can get heated at times, but for the most part it’s a good rivalry.”

This was the first year NAYO included 8 and under teams, who performed well.

“The Recreation Department’s philosophy is the younger you start them, the better off they will be,” said Richard Blankenship, Tribalwide director of Recreation. “We were happy to see them out there. The Tribe was well represented athletically, socially and showed great parental support. It was a great experience, and I hope to keep the kids active throughout the year.”

Wildcat Jumper coached the youngest girls’ team and knows the importance of keeping young kids engaged in the game.

“They took third place, but I’m really proud of them,” he said. “Those little girls played their hearts out. They had three games in a row and were worn out at the end. I told them it showed they left everything on the field and they should be proud. I’m just glad to see new, young ballplayers coming up.”