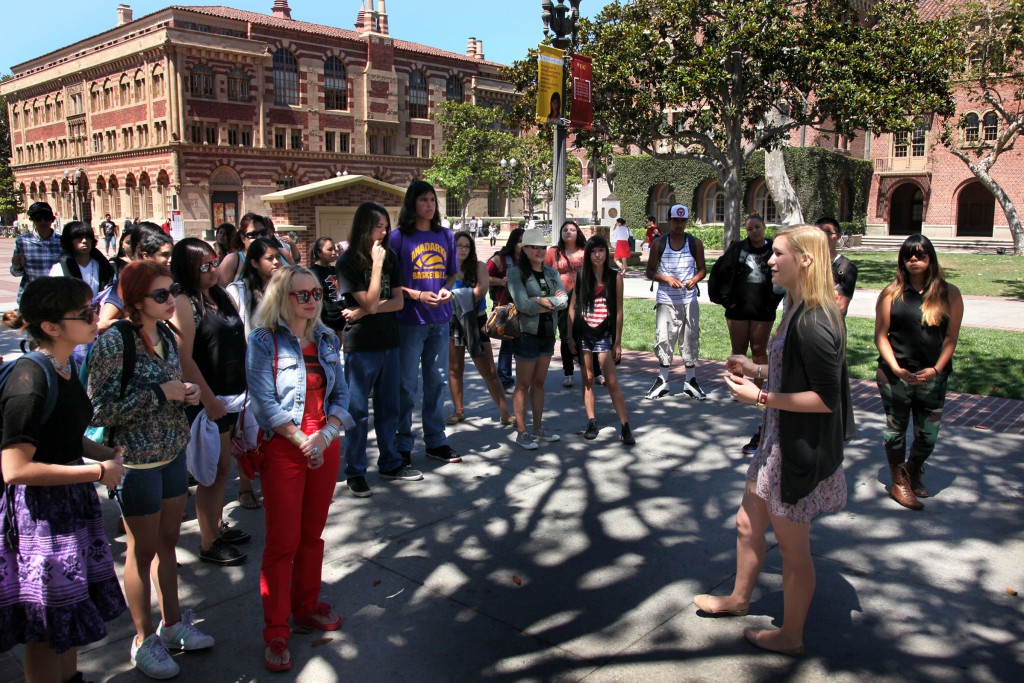 SOUTHERN CALIFORNIA — Southern California may be best known for the Hollywood rich and famous, but Tribal students on a recent college tour of the region discovered that Tinseltown is also a bastion of academia.

Every campus guide touted the prospective school’s academic, artistic and extracurricular opportunities. At UCSB, SBCC and USC especially, students were encouraged to major in their career field, minor in a personal interest and participate in social activities.

“Where else can you take a credited surfing class in the morning, earn a degree though the day and hike with friends in the mountains by afternoon,” said Xavier DeRobles, a guide from SBCC.

UCSB, which rests atop a cliff overlooking the Pacific Ocean, was voted No. 1 for best weather in the nation by Newsweek and boasts five Nobel Prize winners. SBCC received the 2013 Aspen Prize for Community Colleges Excellence, which places it first in the Unites States among all community colleges. At USC, students can attend the nation’s No. 1 video game school, compete on athletic fields that gleaned 122 Olympic gold medalists or participate in the latest research – which recently included validating quantum effects in the first commercial quantum optimization processor.

In most cases, the lure of mountains to the east, beaches to the west and top-notch academics indoors and out, convinced students that secondary education in California offers everything they can imagine.

“I had my mind set on not liking any of the California schools,” said Marsha Osceola, of Big Cypress, who previously wanted to study sociology at Berry College in Georgia. “But I fell in love with the first school we visited and now my mind is opened to all of them. California is one of the most beautiful and upbeat places.”

McKayla Snow, 15, of Brighton, is determined to become a pediatric nurse but her favorite hobby is photography. Before the tour, Snow believed that her only option was Florida State University and that college meant putting hobbies on hold.

“Now I know that I don’t have to stay in Florida or be torn between the sciences and the arts,” she said. “My career goals and creative side can be satisfied at the same time.”

Exposure to different educational choices is the point of the Tribe-sponsored, all-expenses-paid, annual college tour, said Paola Moneymaker, Higher Education coordinator. This year’s event was the first to feature the West Coast. Last year, students traveled through north Florida. In 2011, the tour explored South Carolina, North Carolina and Georgia. In 2010, the trip focused on schools in Arizona, Nevada and New Mexico.

But first, the students must show they are self-motivated and college bound with grade point averages no lower than 2.5, and no attendance, truancy or substance abuse issues. GED graduates are welcome.

“The most valuable part of the tour is the information meetings at each college. There, they learn what they need to do to get in. Teens with two or more years left to make a difference in high school often find out they have to work harder,” said Moneymaker, who has a master’s degree in  elementary education and is working on a doctorate in educational leadership.

Moneymaker said the California group was the largest since the out-of-state tours began.

In fact, a report provided by the Education Department indicates that high school student graduation is at an all-time high. This year, the graduation rate surged to 94 percent of students graduating from as near as Ahfachkee School on the Big Cypress Reservation to Tollgate Technical Skills Center in Ontario, Canada. Four percent earned GED certificates.

During the past five years, the Tribe’s graduation rates have been significantly higher than Native Americans nationwide, according to the most recent report by Education Week.  In 2010, the overall national graduation rate for Native American students was 51.1 percent while the Seminole Tribe boasted a rate of 85 percent.

Florida Seminoles also have Florida beat. The state’s overall public school graduation rate for 2010 was 72.9 percent with 68.7 percent of Native Americans earning high school diplomas. This year, the Florida Department of Education placed the state overall rate at 74.5 percent with Native Americans at 69.7 percent – while the Seminole Tribe rate is 94 percent.

The Education Department’s multi-leveled Tribalwide network of education specialists, led by director Preston Steele, is responsible for mentoring and monitoring education for all Tribal children, teens and college students on and off reservations to help them progress.

“We’ll be always tweaking the program for years to come but with Dr. Steele in the lead, excellence doesn’t mean ‘very good.’ He holds us to a higher standard,” Caruso said.

High school students are given absolute and achievable academic requirements – plus a concise transition timeline to usher them from ninth grade through college graduation. The department provides personal assistance with college searches, annual college tours and a special college fair for Tribal students only featuring more than 80 secondary schools.

Previously, starting in 2004, college visits were sponsored only to Haskell Indian Nations University in Kansas and Florida State University in Tallahassee.

“All of the students are serious about going to college. They asked great questions. They looked forward to every stop. They are walking the talk,” Moneymaker said.

Three students, including Willie, showed interest in joining the U.S. Navy or Marines while aboard the USS Wayne E. Meyer at the Navy base. But, Willie said, he was swayed again at the Art Institute’s culinary school.

“I could be tempted into another field just by seeing all the opportunities in front of me – but I still want to be a firefighter,” he said.

Currently, about 230 Seminole students are enrolled in higher education. The class of 2013 has graduated 26 from GED programs, 11 from tech or trade schools and 13 from universities. Twenty-five of 30 recent high school graduates will enter college this summer or fall.

“That’s pretty amazing. It shows we are headed in the right direction,” Moneymaker said.